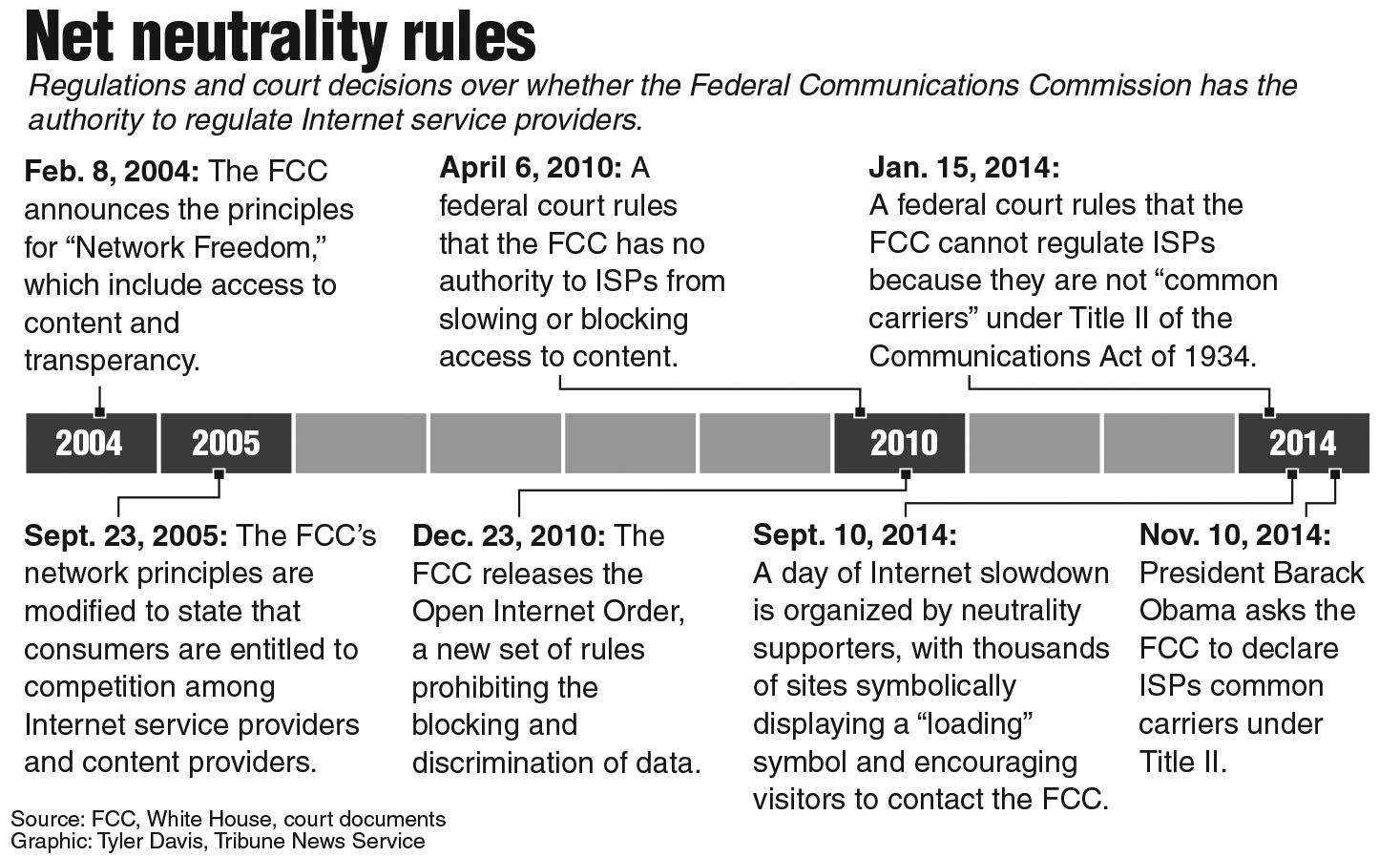 Timeline of rules and court decisions on net neutrality. MCT 2014

On Monday, President Obama released a video in favor of open internet, urging the FCC to do all in its power to keep the internet open to everyone. Because the internet has become such an integral part of our daily lives, it should be protected so that all are given the equal opportunity to use

This is another part in this ongoing battle being waged by telecommunications giants lobbying for fewer regulations.

Net neutrality is the principle that all data and connections should be given equal preference. This idea has been around since before the internet- telecommunications is labeled as a “common carrier”, a label ensuring that companies act in the public interest to provide connections.

On multiple occasions in the past, the FCC has implemented proposals which support net neutrality. They created a set of principles granting freedom to access and download content. In 2010, they created the Open Internet Order, which prevented the blocking of content, prioritization of connections and would also require more transparency on the part of service providers. This order was weak, and didn’t change any of the liberties companies were attempting to make at regulating internet speeds. Ultimately, Verizon sued due to the requirement that they disclose more information on their internet speeds.

Due to this, the FCC is considering two different plans to regulate the internet. The first, called a “hybrid plan”, would differentiate between transactions between transactions involving paid content, which would be given lighter regulations, and “wholesale regulations”. The idea behind this plan is to find a compromise between the desires of service providers, who want fewer regulations, and the desires of the general public, but would ultimately make both unhappy.

The other plan would classify the internet as a common carrier, protecting it under Title II. If this plan were implemented, the service providers would be required to provide service equally.

Verizon has already threatened to sue, should the FCC choose to implement the second plan.

From their point of view, regulation of the internet would prevent innovation and cause the internet to stagnate. They argue that by charging for more bandwidth, they could finance greater service.

However, telecommunication companies appear to be sustaining themselves financially. In 2013, Verizon made approximately $120 billion in revenue, and Comcast raked in around $64 billion.

The world is quickly moving online; it is faster and easier than ever to communicate through it. It allows us to connect with people all over the world. We bank online, we apply for work online, and we research our essays online.

In a system where faster access must be paid for, the internet would become stratified. Priority would be given to those who had money, effectively restricting access for everyone else.

By restricting people’s ability to access content, we would restrict their ability to participate meaningfully in society.

Further, giving control to service providers would allow them to prevent users from accessing certain websites.

For the moment, the FCC has delayed making a decision regarding how the internet will be regulated. When that time comes, they must protect open access to the internet.