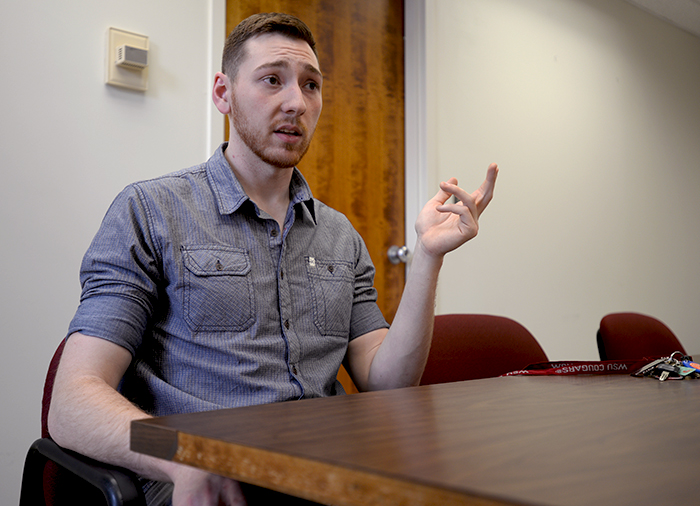 Matthew Sutherland, a 24-year-old WSU graduate, dropped out of a Congressional race, instead announcing his candidacy for a seat in the state’s House of Representatives at a Whitman County Democrats-hosted event Sunday night.

Sutherland declined to specify which of the district’s incumbents he would challenge. Rep. Mary Dye, R-Pomeroy, and Rep. Joe Schmick, R-Colfax, are both up for re-election in 2018.

Unity was one of the night’s common themes, with speakers stressing the importance of quelling tensions between the Democratic Party’s traditional and progressive factions.

Sutherland said endorsing Brown was easy for him because they share many of the same values.

“She already advocates for a lot of the same policies,” he said. “Her and I are on very similar pages when it comes to priorities for this district.”

Both Sutherland and Brown spoke on representing the interests of Eastern Washington’s students. Brown characterized higher education as the “road to prosperity.” She specifically criticized President Donald Trump for a budget proposal that would reduce federal funding for academic research. As a Republican Party leader, McMorris Rodgers failed to fight such proposals, Brown said.

Winning elections in Eastern Washington’s legislative districts was key to the Democrats’ strategy, she said.

“We are not going to concede anything,” Brown said.

If elected, Sutherland would be Eastern Washington’s only Democrat outside of Spokane and the youngest serving in the Legislature.

Sutherland said unifying the message between his and Brown’s campaigns would help the party as a whole.