Some compost made by facilities used in campus greenhouses 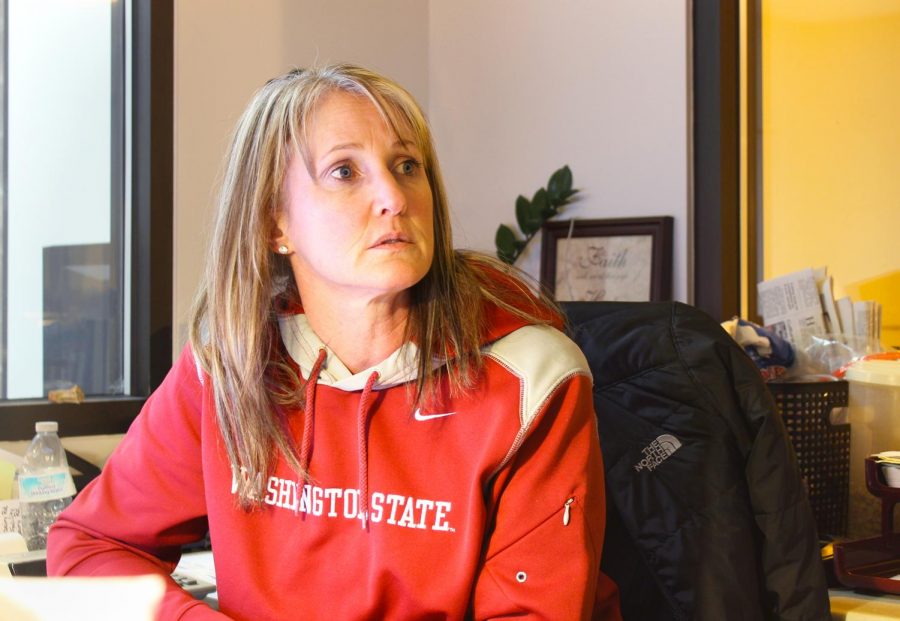 Transportation supervisor of WSU facilities services Brandy Dean explains the composting side of their work.

It was surprisingly quiet, that is until the machines started up and work began.

Cubes of shredded paper, cardboard and filthy plastic create neat stacks in the warehouse. These mountains of recycled goods await pickup to be sent off elsewhere. In the meantime, birds take this opportunity to nest above.

WSU’s recycling center is tucked far away from the hustle and bustle of students on campus who create waste.

“People would rather reuse than throw away,” said Mark Labolle, a truck driver, who runs operations at the warehouse.

Recycle containers of mixed paper, cardboard and comingled items are taken directly from campus to the warehouse, unlike Pullman Disposal Services, which collects all items in one bin and separates waste later.

Once the items arrive at the WSU recycling center, the containers are thrown straight on the belt and compressed into bales.

The recycle center does not process out contaminated goods, whatever is in the recycle containers gets baled. All the bales have a certain contamination limit, if it exceeds that limit the buyer will send the bale back. Some things are not accepted by WSU recycling, like glass and plastic bags.

Labolle said most of the contamination they have is from plastic bags and food, which is why there are birds and flies in the facility. He said people can recycle their plastic coffee cup but not the coffee.

Once the paper, cardboard or comingled items are compacted into bales they are weighed and stacked. The bales range from 1,300 to 2,000 pounds, Labolle said. Consumers buy and pick-up the bales for further processing and are eventually turned into new material.

Recycling can convert used products into new products, such as used aluminum cans into new cans. This process reduces the amount of waste that will end up sitting in a landfill, never able to biodegrade.

During the fall, the halls produce so much food waste that the composting workers must come in on Sundays.

“They produce so much food waste that it can’t handle being left alone for two days,” Labolle said.

Waste from the kitchen dining halls often contains silverware and other contaminated items.

“We have a lot of contamination here,” Dean said. Dean oversees the compost, recycle and waste facilities and the incinerator.

Dean said they hope to eventually make compost for the WSU Eggert Family Organic Farms. Waste collected from the kitchens on campus are too contaminated for the organic farms to use. Eventually, kitchen waste will be separated from the other wastes to create a non-contaminated organic compost.

Manure is the largest component of the facility’s compost, most of which comes from the Animal Research Unit. In return, the facility gives them free compost.

“We have a really good relationship with them,” Dean said.

Compost produced at the facility enriches soil and is extremely good for ARU pastures. It is also used in campus greenhouses and by the landscaping crew.

“We’re really adding on all the time to our composting program,” Dean said.