After flipping state Legislature, they will target GOP-held region 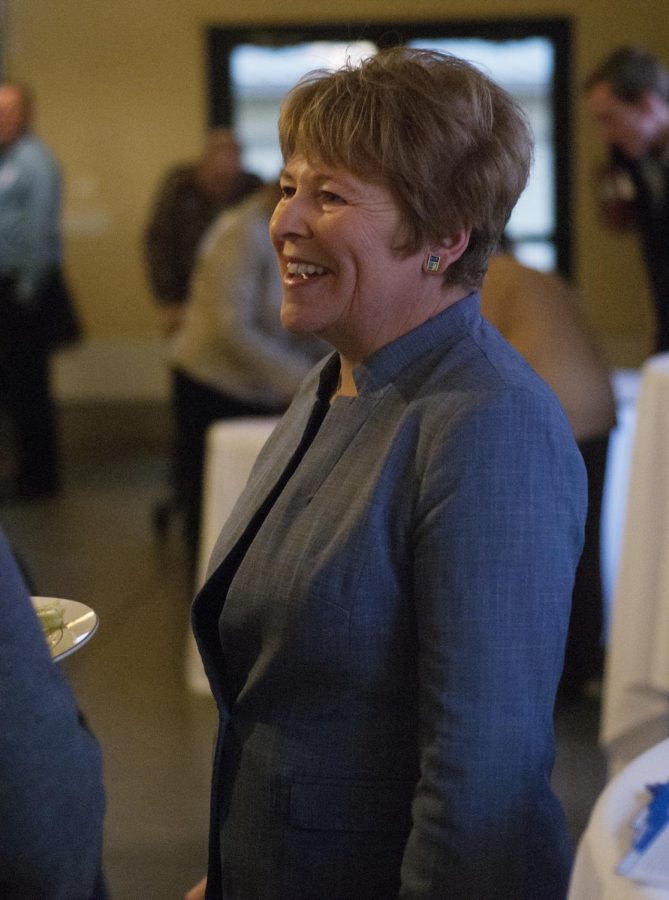 It was just days after the 2017 elections. The Whitman County Democrats hosted a hundred or so locals at the Palouse Ridge Golf Club in Pullman, charging them $25 at the door and up to $1,000 to co-host the event. Democratic candidates Lisa Brown and Matthew Sutherland, who were competing for the same seat in Congress, hugged upon seeing each other and cordially greeted guests together.

Eastern Washington’s political landscape would experience a shift by the end of the evening.

“Today is a good day to be a Democrat,” Eric Fejeran, Whitman County Democrats chair, told the crowd.

Other than Spokane’s one state senator and two state representatives, there are no Democrats east of the Cascades in the Legislature or in Congress. Brown, Sutherland and a coalition of Eastern Washington Democrats seek to change that, but it may take significant support from liberals on the West Side.

“For the last 10 years, Democrats have not invested in Central or Eastern Washington,” said Tina Podlodowski, Washington State Democratic Party chair.
Speakers at early November’s Democratic fundraising event in Pullman tried to show a new direction for the party.

Sutherland, a 24-year-old WSU graduate, Army veteran and then-Congressional candidate, is unapologetically progressive. He protested the Dakota Access Pipeline, ran a “grassroots” campaign and advocated for the idea that affordable healthcare is a basic human right, all of which were popular Sanders rallying points. However, he did not attack the party’s less liberal wing, saying “it doesn’t matter” whether they caucused for Clinton or Sanders.

“Right now, we have the most opportune time to turn Eastern Washington blue,” he said. “It’s all about party unity.”

Sutherland later said it was easy for him to endorse Brown, a former state Senate majority leader and WSU Spokane Chancellor, because “she already advocates for a lot of the same policies.”

Brown did not formally endorse Sutherland, but recognized his about seven-month-long campaign.

“Matthew, regarding the announcement you just made … I believe you are changing course for the greater good,” she said. “Unity in our party is starting right here and right now.”

Earlier in the week, voters in the 45th legislative district — Seattle suburbs located west of the Cascades but east of Lake Washington — elected Manka Dhingra to the state Senate, in which Republicans held a majority up until that point. Democrats now hold unbridled rule over the Legislature, with control of the governor’s mansion and majorities in the state House and Senate. Before the election, Gov. Jay Inslee, in an early November New York Times interview, said Democrats would “make a full-scale effort in the next session of the Legislature if we win,” which could mean the enactment of a carbon tax, something Republicans have long stood in the way of.

Running liberal campaigns in conservative parts of the state may not prove a winning strategy, but Democrats are shifting their rhetoric in an attempt to win over conservative Eastern Washington voters. One such shift is evident in their rejection of Seattle, which has long served as the Pacific Northwest’s liberal bastion.

“If one stands atop the Space Needle, you can see all the votes you’ll need to win,” said former Sen. Warren Magnuson, who represented Washington from 1944 to 1981.

“Sometimes, the best view of Seattle is in the rearview mirror,” Stober said. “They don’t know how to win over here.”

He said the King County Democrats would not directly contribute to candidates in Eastern Washington, but rather donate to local political organizations, who could use the funds how they saw fit.

Despite Democrats supposed Eastern Washington empowerment, Republican state Sen. Mark Schoesler, who for 12 years has served as senator in the district Sutherland is competing in, remains unconvinced.

Republicans, not Democrats, have represented Eastern Washingtonians’ interests in the Legislature, he said.

One specific example Schoesler pointed to was Democrats’ years-long opposition to proposals, popular among Eastern Washington Republicans, which would solve a water rights impasse brought about by the state Supreme Court’s Hirst decision.

“If you look at who is looking after Eastern Washington,” he said, “it’s not Spokane Democrats.”

Beyond the Legislature, Schoesler said, Democrats have a slim chance of winning the Congressional race.

“They have to reinvent Lisa Brown if they have any hope of winning,” he said.

The Brown Schoesler remembers brought a lawsuit to the state Supreme Court in 2008, hoping to overturn a voter-approved initiative that would require two-thirds of the Legislature’s approval for any new tax increases. Brown argued it was unconstitutional, but Schoesler saw it as an attempt to make raising taxes easier. The Court ended up throwing out the case, leaving the initiative in place. Six years later, the Court repealed the initiative at the urging of Gov. Christine Gregoire and the Washington Education Association.

“Getting Lisa Brown elected … that is definitely going to be a challenge,” said Fejeran, the Whitman County Democrats chair.

In the 2016 presidential election, Whitman County voters favored Clinton over Trump by about 4 percent.

Fejeran said getting WSU students, a generally liberal population, to register and vote in Pullman would be key to getting Democrats elected to Congress, the Legislature, countywide and citywide offices.

University students could be a big help to Eastern Washington Democrats, but, Pielow said, many do not think to register in Pullman or do not vote at all.

“[Another challenge] is the fact that the primary is in August, even before students come back to campus,” he said.

Podlodowski, the state Democratic Party chair, said the win in the 45th Legislative District represented a turning point for Democrats.

She said the liberal progressive agenda on healthcare, housing, criminal justice and Social Security would benefit Eastern Washington, but only if Democrats could flip enough seats.

Since flipping the 45th, Democrats earned the opportunity to choose new Senate leadership, but only one person could represent Eastern Washington. They chose Spokane’s Andy Billig, the only Eastern Washington Democratic senator, for the deputy majority leader post.

Next year’s elections will show if Democrats’ efforts to reach out eastward worked in their favor, but Republicans have a strong foothold in this part of the state.

The Democratic Congressional Campaign Committee has named Washington’s 5th District as one of its main targets for the 2018 elections, which could mean a flood of out-of-state contributions.

Pasco Democrat Jennifer Goulet announced in early November that she would again challenge Dye after losing 66 percent of the vote in 2016.

Dhingra’s win in the 45th Legislative District, a more liberal district than the 9th, was a competitive battle that started about a year ago when Republican Sen. Andy Hill died after a bout with lung cancer. The Metropolitan King County Council appointed two-time Republican gubernatorial candidate Dino Rossi to fill in, but Rossi would not seek re-election because he wanted a seat in Congress.

Democrats quickly realized the opportunity to flip the Senate while Republicans had to do all they could to defend their one-vote majority.

The race became the most expensive in Washington’s history, according to the Public Disclosure Commission, bringing in money from billionaire political advocates like the Koch brothers and former New York Mayor Michael Bloomberg. It cost Dhingra’s campaign over $1.3 million to win the seat. Independent of her campaign, supporters spent over $900,000 in Dhingra’s favor and over $1.7 million against the other candidate.

“Now, we have control of the Senate … We’re going to propel ourselves off these victories and we’re going to come together,” Sutherland told the donors at the Palouse Ridge Golf Club. “We need to come together. We must unify. We cannot move the mountains in front of us unless we do so.”

Correction: The Democratic Congressional Campaign Committee target district for 2018 is the 5th District and not the 4th District. The State Supreme Court later repealed the anti-tax initiative, and did not throw out the lawsuit.