‘It’s OK to be white’ posters reappear on campus

Students altered posters with stickers, other messages before staff removed them 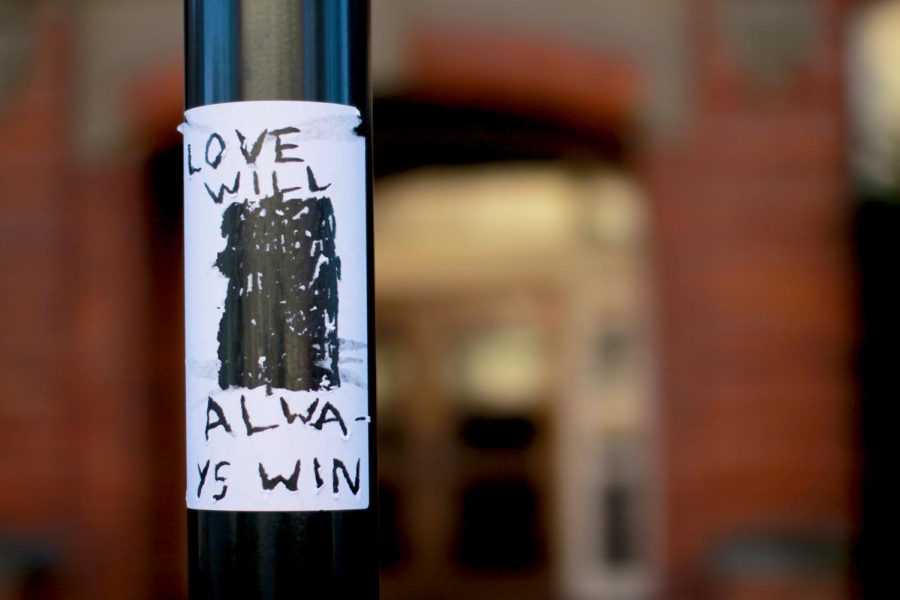 A poster, which originally read “It’s OK to be white,” was scratched out and replaced with “Love will always win,” as seen Monday morning.

A second wave of posters reading “It’s OK to be white” were found posted on the Glenn Terrell Friendship Mall on Monday morning.

Passersby wrote on or altered the posters before Facilities Services arrived to remove them. Changes included hearts drawn over the words and a marriage equality sticker. One sign was revised to read “It’s OK to be gay,” and another had the suicide hotline number added to it.

Facilities Services employee Derrick Reynolds said the posters were difficult to remove because they were stuck to the posts. They began taking them down at about 11:45 a.m.

The signs echoed others that appeared earlier this month with the same phrase. While they do not contain a racial slur, many find the signs offensive, and student groups have reacted to their reappearance.

“Obviously, anything that communicates a lack of tolerance and communicates hate, it’s not really welcome,” said Manuel Acevedo, a member of the Bias Advisory Response Team. “It’s not really helpful to how we want to be as a university and as a community.”

Acevedo said the team will try to understand why someone put the signs up, and they wanted to ensure that students still feel welcome on campus.

Rafael Pruneda, a retention counselor with the Latino/a Student Center, said that while he thinks the signs are inappropriate, those who posted them should use their voice. However, he said, they should own their opinions publicly, like other students.

“I think it’s kind of cowardly that someone wants to post those without putting a face to it,” he said. “If this is something you want to talk about, be like our other students and talk about it if you think it matters.”

He interpreted the signs as a message of white ideology or supremacy, but added that without more context, it is impossible to know the intent behind them.

“I could be totally wrong, maybe there is another issue behind it,” he said. “But if there is no student or person behind it, we can only assume.”

WSU Vice President of Communication Phil Weiler said the university sees no justification for the behavior.

He said WSU’s goal is to make the campus as inclusive and welcoming as possible, and that the posters do not align with the purpose of higher education.

“If the intention is to threaten and intimidate,” he said, “they should not be here.”