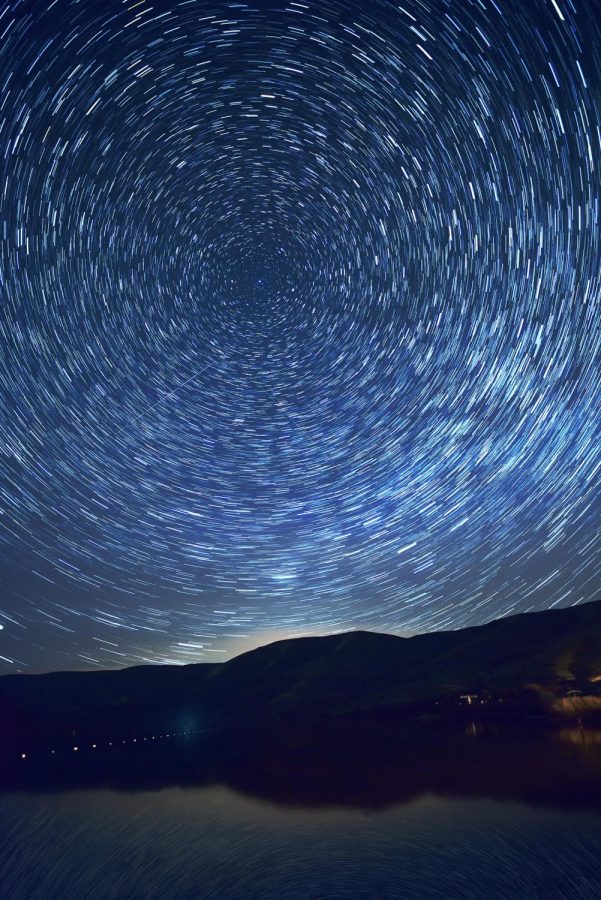 Local astronomers express concern over the construction of a cell tower that would limit views of stars.

It takes a little over a mile of uphill driving and unlocking and relocking several gates along the way to reach the highest point of Bald Butte, 30 minutes south of Pullman.

Deer graze nearby and coyotes’ howls echo below. This is the meticulously chosen site of the Palouse Astronomical Society’s observatory, built after years of location scouting and fundraising. The structure’s roof rolls off for views of the sky above, and the back wall folds back, framing the top of a lower-sloping part of the hill and the rest of the Palouse.

Until recently, a 300-foot-tall lighted cell tower was slated to be built on this lower hill by Inland Cellular, which would obstruct the view from the observatory and ruin the clear night sky. It’s a slice of heaven for astronomers in the area: Remote enough to be free from the light pollution of neighboring communities like Pullman, the brightest city for miles, but close enough to be able to drive home.

“There’s a study — 80 percent of Americans cannot see the Milky Way, the galaxy that we live in,” said Alex Boughamer, a Moscow resident and manager of the observatory. “For eons, or millennia I guess, the stars have guided us and created lore. People looked up to them and used them for navigation.”

Boughamer has spearheaded a group effort to advocate for an environmental impact report on the building of the cell tower, which would ruin the perfect darkness of the location. He brings a strobe light to interviews to demonstrate the nuisance of constant flashing lights.

“It’s hard to tell somebody, ‘Oh yeah, save our skies,’ and get people riled up about it,” he said. “I don’t know if anyone in Johnson is like, ‘Hey, great, they’re going to put a big strobe light in my backyard.’ I don’t know anyone that is pretty happy about that. Most people are pretty upset about the possibility.”

Whitman County initially determined little further environmental review was required, and issued a declaration of non-significance on the project.

A later report conducted by botanist James Riser found the site of the proposed cell tower is potentially home to an ecosystem called Palouse prairie, which is protected by the Whitman County Critical Areas Ordinance. By 1900, about 90 percent of Palouse prarie had been converted for farming. It is estimated that less than 1 percent of the native ecosystem of the Palouse remains today.  Rise works under the Palouse Conservation District, surveying and taking inventory of remaining pieces of Palouse prairie in Whitman County.

“At the time, the [declaration of non-significance] was issued with no knowledge of Palouse prairie and astronomical society,” Thomson said.

Though he doesn’t have an exact count, he said he considers the amount of public comment on the issue significant. The majority of comments were about the native land and light pollution, and he said the majority of the towers in the area do not have lights.

“That’s an important point, because cell towers are all over the place,” he said. “This kind of scrutiny in my 15 years has never happened since this new cell tower was proposed. It’s people associated with the observatory, anybody interested in plants, people who live in the potential radius of the tower.”

Thomson said the majority of cell towers are less than 200 feet. Anything over that would require lights. Per Whitman County code, there is a height limit of 350 feet for cell towers.

Like any company that has to justify building a new tower, Inland Cellular provided information to the county’s planning office, verified and signed by an engineer, that they would not be able to prolocate, or use an existing tower, because the existing towers are not structurally capable of holding the equipment the company wanted to add.

Given the time of year, a final report is not possible until the warmer months, when native plants will be in full bloom, Thomson said. He would not be able to issue a permit allowing the tower to be built until then.

Bald Butte, in its entirety, is privately owned by two different people and has several cell towers at lower elevations. Adjacent to the Palouse Astronomical Society’s observatory is an unlighted tower. If Inland Cellular decides to look for a new location in lieu of waiting for the final report to come out in the summer, they would have to approach the other landowner about building the tower.

“For the location that has been chosen at the moment, the preliminary report means you cannot build,” he said.

More comprehensive research can be done here where it can’t be done at UI or WSU, Boughamer said, which houses the state’s second-largest refracting telescope at the Jewett Observatory.

With a pair of binoculars in hand, he gazed off into the distance just after dusk on a recent evening. He has the cadence of a museum tour guide, and the sky is his exhibit. He explained constellations, the ways different colors scatter when they reach the human eye (he’s a fan of amber lights because they create less light pollution as opposed to blue lights, which scatter and appear fuzzier), the night sky views from other slopes of the Palouse.

“It seems that wherever you put up an observatory, light follows,” he said. “You cannot see that far, the skies are too bright to see that far.”

Today, WSU’s Martin unshielded stadium lights shine brightly, as do the rows of greenhouses next to the Jewett Observatory, limiting the observational and research capacities of the telescope to brighter objects and some planets. The observatory mainly hosts student laboratories and the occasional star party.

Boughamer believes everyone should have the chance to see the beauty of clear starry nights. He said nighttime satellite photos captured of Earth may look dazzling with pockets of light until one realizes the cost of excessive brightness.

“I think there are few amazing things.” He paused. “Like watching the sunsets. What if you couldn’t see the ocean anymore? I think people might get a little bit upset.”

Regulation of lighting, such as changing to amber lighting, would make all the difference, Boughamer said.

Dark sky protections fall under the jurisdiction of local government. There are no codes of regulations that protect the dark sky, though Thomson pointed to the careful consideration put into environmental impact statements for any building projects, such as that of the more than 400-foot-tall wind turbines between Oakesdale and Highway 195.

“Smarter decisions, appropriate illumination of lights — honestly, I would love WSU to go to red, wouldn’t that be cool? Except for crosswalks and things like that. UI could go gold— all yellow,” Boughamer said, referring to each university’s respective school colors.

But Bald Butte has the prettiest views of the Palouse, he said. On a clear day, it’s possible to see into Montana.

“One of the reasons the Palouse is beautiful is because it doesn’t look like New Jersey,” he said. “People that may be here for a while may take that for granted.”