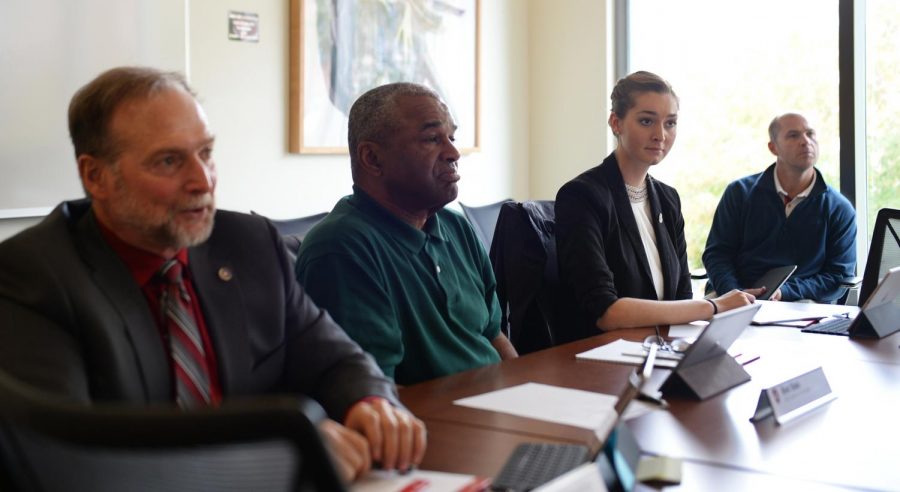 WSU’s Board of Regents met for two days at the Vancouver campus just before Thanksgiving break to give final approval for building designs, set forth a lobbying agenda and consider a letter of disapproval regarding charging for electronic public records.

The Regents approved design proposals for two buildings on Nov. 17. The first would be an add-on to existing Global Animal Health facilities, which house disease research programs. The new two-story facility would have more lab spaces on both floors and necropsy suites on the ground floor.

The building, which would be located between the Hitchcock Equine Research Track and the Veterinary Teaching Hospital on the south side of campus, would be another step toward the university’s goal of creating a “research district” east of Stadium Way, according to the Pullman Campus Master Plan.

The second design, for a Plant Sciences Building that would also contribute to the research district, would house biochemistry, plant pathology, horticulture and soil science laboratories. The building would connect with the Biotechnology and Life Sciences Facility and the Veterinary and Biomedical Research Building through a skywalk, and would replace an existing parking lot.

Colleen Kerr, vice president for government relations and external affairs, brought before the regents a federal lobbying agenda, in support of legislation regarding agriculture and financial support for the university.

Kerr noted that the 2018 Farm Bill would be a priority. The bill could change crop insurance policies and the availability of funds for research. Kerr reported her office would support reauthorizing the bill to avoid disrupting WSU’s agricultural research.

Kerr also told the regents her office would lobby in favor of renewing the Higher Education Act, which could impact student loan rates and Pell grants. She noted opportunities to work with Sen. Patty Murray, a WSU graduate, who is the top Democrat on the Senate Committee on Health, Education, Labor and Pensions Committee.

Despite this, she said there were still holes to fill in terms of representation in the House, because no Washington representatives sit on the Committee on Education and the Workforce.

Norman G. Lewis, a regents professor in the Institute of Biological Chemistry, submitted a letter to the board, expressing his discontent with their approval of charging for electronic copies of public records.

At a public hearing in early October, Stephanie Kalasz, the university’s public records coordinator, said her office needed to recover some of the cost of providing free electronic records.

“There is a natural desire of government officials to shield prejudicial information from the public,” Lewis’ letter read. “The greater the barriers to obtaining information, the less information will be disclosed.”

The Board of Regents scheduled to meet again in the first week of March at the Tri-Cities campus.