Tips, tricks from practiced survivors of Dead Week still might not be enough to get students through semester 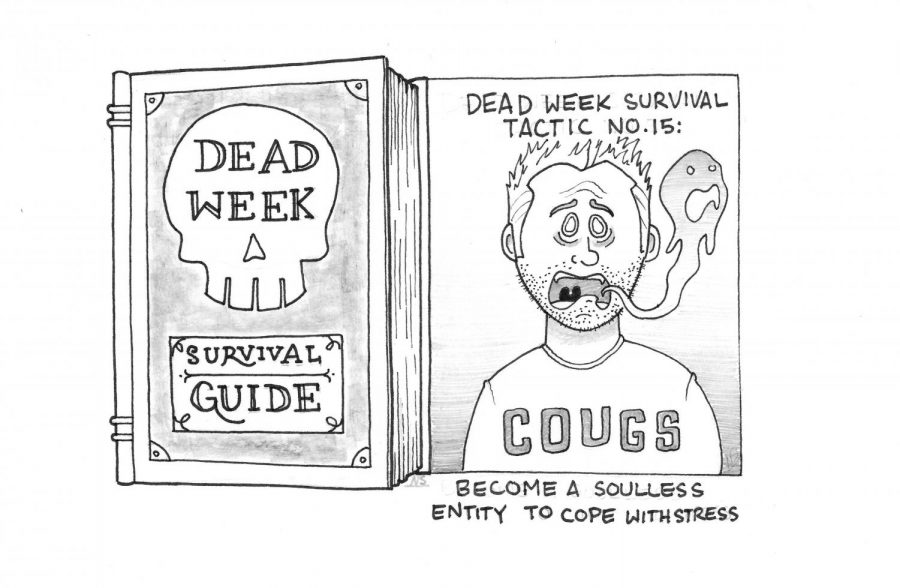 Optimistic yet naive students across campus are in for a surprise next Monday, as this marks the arrival of the legendary Dead Week. There are myths spread far and wide about this much-anticipated time of the year, but things are not always what they seem.

“As Dead Week approaches, it is important to be informed and take all necessary precautions,” said LeeAnn Gordon, a grad student in the agriculture program. “When your professor tells you it’ll be an easy week, make sure to not look them directly in the eyes. Otherwise, they might trick you into believing it.”

Sporting a “Cougar Wonderland” sweater already threadbare from constant wear, and a messy bun that was more messy than bun, Gordon was clearly already in full Dead Week Survival Mode. The symptoms of Survival Mode vary between students, but it can usually be diagnosed by baggy eyes, regret as to the choice of major, and violent mood swings between despair and apathy.

Extremely vulnerable students may spend more time studying each day than breathing. According to experts in Dead Week survival tactics, the best way for students to avoid this is by constantly joking to their peers that they don’t even care what grade they get anymore, because they’re just so done. Another technique is to forget one’s own identity and become a soulless entity to escape the pain.

Gordon was well-practiced in the latter option.

“When someone tells you this is the calm before the storm, resist punching them in the face,” she said in an emotionless monotone. “It only bruises your hand, which must remain intact if you’re going to write all those damn essays.”

From the perspective of professors, the dread around Dead Week is a mystery. As it is custom to brainwash professors of their college days before initiating them as faculty members, they have no recollection of the miserable hours of studying on top of last-minute assignments.

“I don’t get what the big deal is,” said Melvin Wright, a professor in the agricultural sciences department. “All of us professors agree to take it easy on our students during Dead Week to let them study for finals. It’s practically required in our contract.”

Wright stated that he would only be assigning two worksheets, one lab, an essay of exactly fourteen pages (no more and no less, but not including the annotated bibliography), three presentations in a foreign language drawn from a hat, and the rough draft of a script for a full-length original musical.

“Of course I don’t want to interfere with the students’ study time,” he said. “That’s not only unfair to them, it’s unfair to myself if I don’t give them adequate time to absorb everything I’ve taught them.”

Nonetheless, veteran students still live in fear of the week to come. Sophomore computer science Kellan Briggs has only seen two prior Dead Weeks, but his fear was as acute as any upperclassman’s.

“Dead Week really is nothing more than an old wives’ tale,” he said. “Maybe it existed once long ago, but the honor involved in giving students a week to study is long gone. For all intents and purposes, Dead Week is dead.”

Anna Young is a freshman creative writing major from Helena, Montana. She can be contacted at mint@dailyevergreen.com.