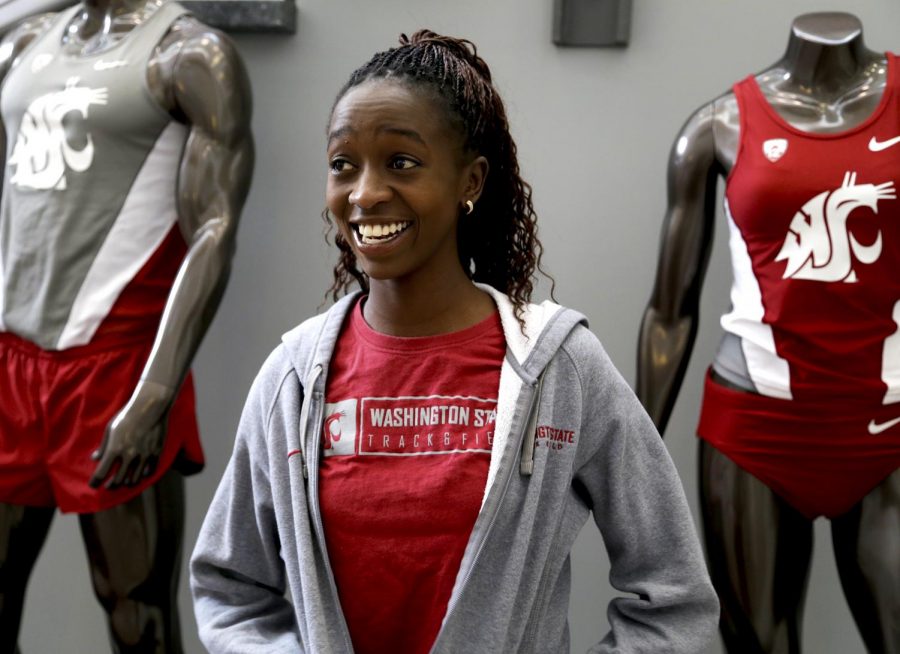 WSU junior distance runner Vallery Korir is originally from Kenya. She moved to the U.S. about five years ago and began training.

She originally attended Murray State University, where she began her competitive running career, although rather unsuccessfully at first, she said.

“It was really hard,” Korir said. “When I came to the U.S. my freshman year, I didn’t really run [well]. The transition was so hard, especially with the food, new people, new language and everything — you’re missing your family, you’re far away from your home.”

She transferred to WSU nearly one year ago after reaching out to cross country Head Coach Wayne Phipps. He said he thought the fit was perfect after getting a sense of her goals and work ethic.

The allure of Pac-12 competition is what ultimately drove her to Pullman, Korir said.

“I felt like I had a talent and I needed something challenging,” she said.

Korir became the fourth-ever Cougar woman in program history to earn Division I All-American honors after the U.S. Track & Field and Cross Country Coaches Association announced the list on Nov. 20.

The list included all top-40 finishers from the 2017 NCAA Division I Cross Country Championships on Nov. 18, where Korir finished 33rd with a time of 20:07.90 minutes.

Success in running is not something new to the Korir family. Her brother, Leonard, was a two-time NCAA champion at Iona College, and is among the top long-distance runners in the world.

“My brother has been my inspiration of course,” Korir said. “I feel like if my brother can do it, I can do it, you know? Like, it’s your blood brother, you have no excuse.”

Korir said she believes a major reason for her success comes from training with her brother over the summer in Colorado, where the high altitude helped improve her endurance. Every morning, he ran 12 miles and every evening, he ran four, so she decided to follow along with his routine.

Phipps said competing all season with the best the country has to offer also greatly impacted her performance.

“She’s gained a lot of confidence by the fact that we compete in a lot of high level meets throughout the season and then Pac-12 being the toughest distance conference in the entire nation,” Phipps said. “I think performing well there really helped her confidence and appreciation, and a realization that she can compete with the very best in the nation.”

Her improved confidence, along with unmatched work ethic and dedication, could make her a top-10 runner in the country next year, Phipps said.

“It’s hard to know what the limit is on her potential because she hasn’t been running that long and the rate of improvement that we’ve seen in such a short period of time has been absolutely incredible,” he said. “The potential is unlimited, and I think she’s just now starting to touch on what she’s capable of doing in the future.”

Korir said she has hopes of  running professionally and said she feels as if she has the talent to do so. For now, though, she is focusing on working hard and continuing to improve. She said she challenges herself to run with her brother and never shies away from competition.

“I feel like running is all about determination and hard work, and with those two — oh my god, it could take you to [the] Olympics!”