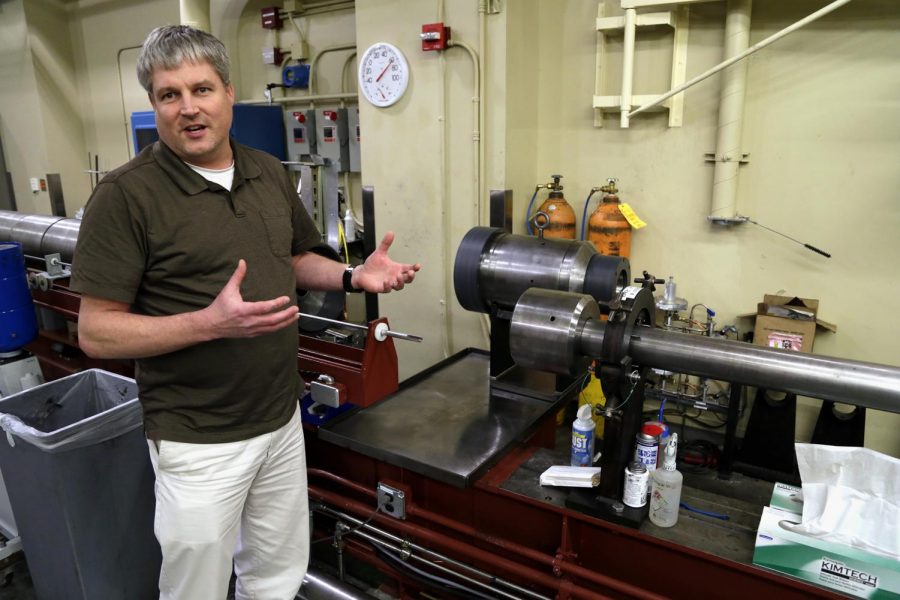 Shock physicist Stefan Turneaure shows the transition in the launcher from the gas pressurizing chamber to the projectile launching chamber.

For the first time, a team of WSU researchers observed and recorded the formation of hexagonal diamonds from graphite, which occurred in nanoseconds.

The hexagonal diamonds, also called lonsdaleite, are about 60 percent stronger than stones used for engagement rings, which are typically formed during major meteorite strikes.

Using a machine to compress the graphite, the researchers found the transformation of graphite into diamonds took only a few nanoseconds.

In the experiment, a high-velocity impactor struck the highly oriented pyrolytic  graphite. This resulted in a shock wave that traveled 30,000 kph through the material, compressing the graphite to 500,000 times beyond standard pressure, transforming it into a hexagonal diamond.

WSU Regents Professor Yogendra Gupta, director of the Institute for Shock Physics and a co-author of the study, said the significance is not the formation of the diamonds, but their precision.

Stefan Turneaure, shock physicist and author of the study, and a team of researchers found the formation occurs at a pressure about four times lower than previous studies had estimated. Gupta said this provides a “pressure thermometer” that can be used to estimate the pressures at meteorite impact sites where hexagonal diamonds have previously been found.

“It’s an excellent benchmark for researchers to check their theories,” Gupta said.

He said their interest in this research stemmed from 1961, when a Stanford Research Institute experiment found graphite could be turned into diamonds through shockwave methods.

The excitement around diamond research drove a great deal of interest for researchers, including Gupta, who was also influenced by a paper his colleague produced about the research in the 1990s.

When the WSU researchers were putting together the Dynamic Compression Sector, Gupta said they had hexagonal diamond research in mind. He said the WSU Institute for Shock Physics on campus does similar experiments but cannot do the X-ray measurements the DCS can.

Gupta said because of the strength of the hexagonal diamonds, he believed they could be used more for industrial purposes, rather than the typical cubic diamond used for jewelry.

However, their experiments haven’t been able to recover the diamonds after the shock pressure is released. Their next step is to investigate how they could be recovered, but they are satisfied with their findings so far.

“Anybody can make a claim,” Gupta said. “But at the end of the day, you need unambiguous observations to prove something, and that’s what [Turneaure’s] experiment has done.”

In an earlier version of the story, a fact was incorrect. The diamond research was conducted at a WSU operated Dynamic Compression Sector facility, not owned. The story also labeled the graphite as precisely placed, instead of highly oriented.

Clarification, while similar research on the formation of diamonds, this is the first time researchers have unambiguously observed it.