Cougars trailed by 19, made only four three-pointers in first half of game 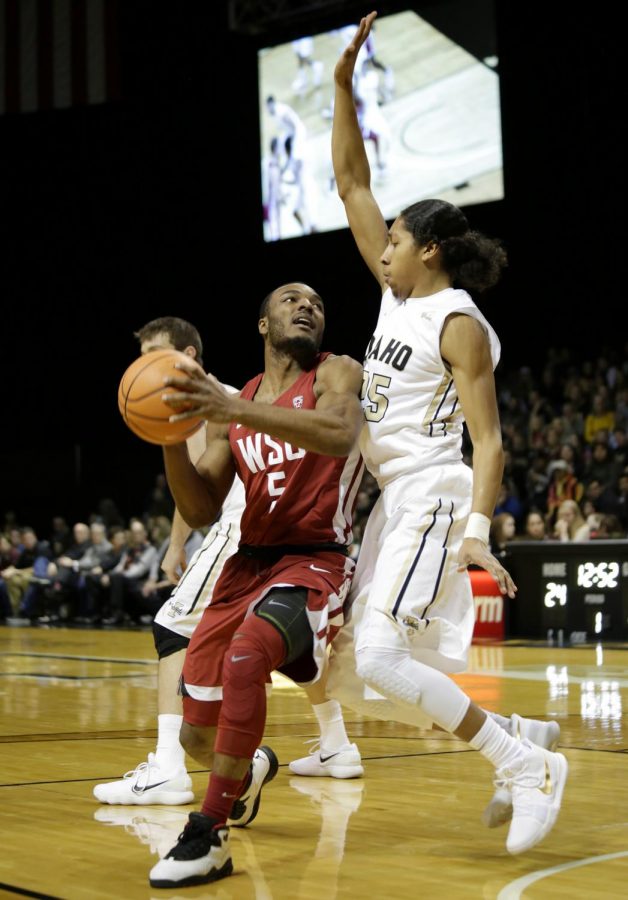 Redshirt freshman guard Milan Acquaah makes a layup for WSU on Wednesday in the Kibbie Dome.

WSU men’s basketball traveled eight miles east to take on University of Idaho in the “Battle of the Palouse,” but suffered a 91-64 loss to the Vandals on Wednesday night.

It was the season debut for Idaho’s basketball facility, Cowan Spectrum. More than 4,000 fans showed up to watch the Vandals (6-2) put up their most points against a Division I opponent this season.

WSU Head Coach Ernie Kent gave credit to the Vandals for their ability to knock down shots.

“Everything they put up went in,” Kent said. “I don’t know about us being flat. They just played so well, they knocked us on our heels and I don’t think we ever recovered from it.”

Until Wednesday night, Idaho had not scored over 80 points against a Division I opponent this season. The team hit 14 three-pointers on the night and shot 56 percent from beyond the arc.

The Vandals’ first-half shooting started early as they jumped to a 22-6 lead in just five and a half minutes of action. WSU (6-2) pulled back within six at the halfway mark of the first half, but didn’t get any closer after that.

The only Cougar that seemed able to shoot in the first half was sophomore point guard Malachi Flynn, who scored all of his nine points from three.

At the half, WSU faced a 19-point deficit. Idaho senior forward Brayon Blake made his presence felt in the first half with 18 points, while making all four of his three-point shots.

The Vandals cooled down in the second half, shooting 45.5 percent from the field and three-point range. But the Cougars could not shake their shooting woes, making just 13 of their 30 attempted shots in the final 20 minutes.  Flynn was unable to add anything to his nine first-half points.

WSU junior forward Robert Franks, who led WSU in scoring with 16, fell into foul trouble with 10 minutes left and was sent to the bench.

The final buzzer rang to a roar of approval from the Vandals in attendance, as they knocked off their rivals.

“It’s amazing when we get people in this building how electric it is and how much better we play,” Idaho Head Coach Don Verlin said. “I appreciate the administration and the fans for coming out tonight and doing a good job of helping the Vandals win.”

WSU returns to the court 6 p.m. Saturday for a matchup with University of Texas, El Paso, at the Don Haskins Center.