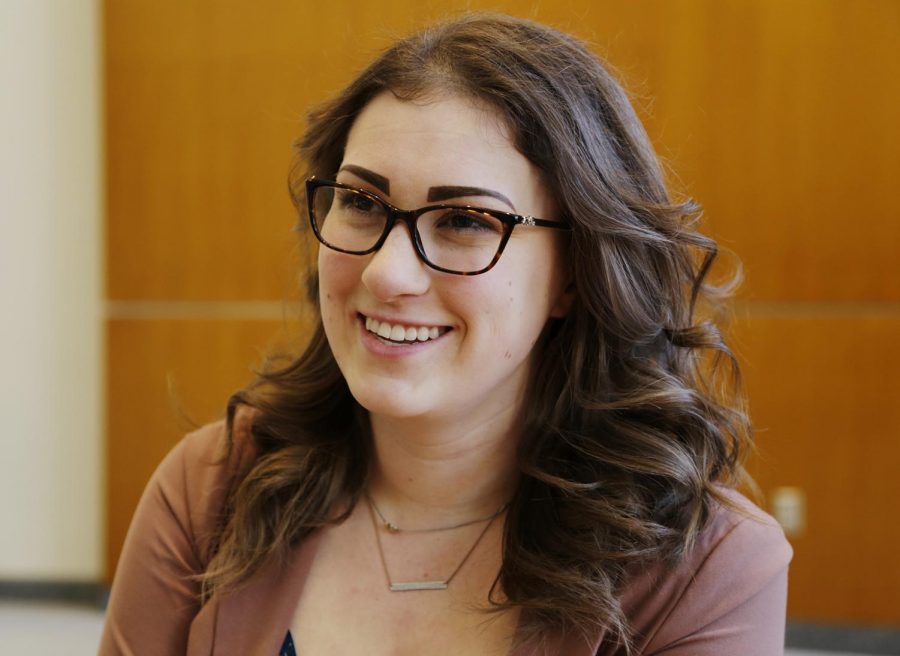 Bellevue native prepares for future in finance
ASWSU senator, Pi Beta Phi sorority member and orientation counselor are just a few of the titles senior Courtney Crouch has held in her time at WSU.

A Bellevue native, Crouch began her college career at Gonzaga University. But after her first semester, she felt she needed more of a challenge at a bigger school.

“[I] wanted to meet new people,” she said, “but also see people I knew and feel a part of a community.”

She decided to come to WSU because it was in her home state, and everyone she talked to that went here told her they loved it.

Crouch came to love it too and got involved right away. In fact, she said she got a little too involved her first year, and it began to hurt her grades.

Despite this, Crouch was determined to stay at WSU. She said finding a balance was a challenge, but she wanted to stay and grow, and has now found her stride.

Crouch joined her sorority in fall of 2014 and was also an orientation counselor last summer. Following in the footsteps of her older brother Adam Crouch, who served as ASWSU president in the 2015-2016 school year, she joined the student government and enjoys her role in the organization.

“It’s always really fun, because Senate is not just a job,” she said. “It’s like a family.”

An economic sciences major, Crouch is still not sure what she wants to do. She said she would like to move to Yakima to get away from the gloom of the West Side and find a job in finance.

Crouch’s little and best friend, Kendall Hanson, said she sees her doing something she is passionate about. She described Crouch as hardworking, dedicated and funny.

“If you’re her friend, it’s a good place to be,” Hanson said. “She’s just a great person and she cares a lot.”
Hopeful space engineer inspired by father’s career
Tucked within the twists and turns of the Electrical and Mechanical Engineering Building is a small office where Gregory Wallace prepares for the world of space engineering.

He said the vast expanse of space doesn’t intimidate him, but intrigues him. His interest in how the physical world works drives him to learn about anything that he can get his hands on.

Growing up in Renton, his dad taught him how things are put together. This inspired Wallace to become a mechanical engineer, like his dad. Joining the Innovation for Sustainable Energy club at WSU gave him insight into potential careers within this field.

ISE is working to create a refueling station for hydrogen-powered cars. They are building a liquefier to condense hydrogen gas into liquid form, because transporting liquid hydrogen is much safer and easier than gas.

Wallace interned with Planetary Resources, an asteroid mining company, which launched his passion for space engineering. He applied knowledge from class to his internship and gained real-world experience.

“I wish I would have been involved in space engineering earlier,” he said.

After his internship, he joined Cougs in Space, a group of students building a cube satellite that will be launched into space a few years from now. NASA is funding the launch, alleviating a major financial burden for the team and allowing money to go toward equipment. Wallace is the structures team lead, dealing with the mechanical aspects of the cube satellite.

As a senior nearing graduation, Wallace would like to continue in space engineering and add a personal interest of his — cryogenics, the study of how material behaves at very low temperatures.
Graduate student to study overseas
WSU Vancouver student Amanda Thiel has been passionate about plants since her undergraduate years.

Nearing graduation with a master’s in cultural anthropology, Thiel has traveled overseas for her research and educated elementary school children about botany.

Thiel went to rural Guatemala in the summer of 2016 to research ethnobotany, the study of how people use  plants in their region. During her two-month stay, she interviewed Q’eqchi’ Maya villagers about the type of plants growing in their gardens, and used the information she gathered for her thesis.

She formed an outreach program last year by gathering a group of her colleagues to educate elementary students at Franklin Elementary School about anthropology. Many students at this age are not familiar with anthropology, Thiel said, and it was important for her to teach them about diversity and similarities in each culture.

Thiel and her colleagues plan to continue this outreach program not only in Washington, but also in Oregon.

Thiel, who is also a single mother, said both WSU Pullman and WSU Vancouver, which she transferred to last semester, have been a positive experience and helpful with childcare.

Jo Bonner, office assistant for the department of anthropology in Pullman, said Thiel is a “down-to-earth ray of sunshine with a generous spirit.” She is positive and hardworking in school, Bonner added.

After graduation, Thiel plans to continue her education at WSU Vancouver, where she will receive her doctorate in cultural anthropology and travel overseas again to conduct more research. Her goal is to someday become a professor and teach students about anthropology.

“Do what you love,” she said, “but also be realistic.”