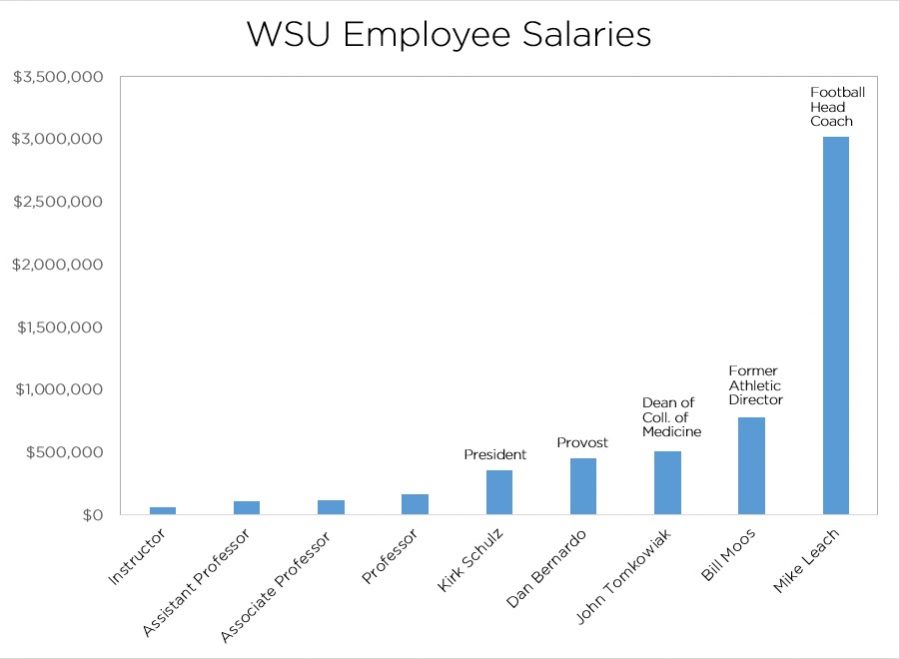 Mike Leach to Kirk Schulz show salaries paid to WSU employees in 2016 from the Washington Office of Financial Management. Instructor to professor show national average salaries for university employees in 2017.

Fliers telling the administration to “Go do your god damn jobs” appeared on campus during the first weekend of December.

“This deficit crisis, and your handling of it, are unacceptable,” the anonymous fliers addressed to the administrators read.

Schulz’s expenditure reduction plan included eliminating the Performing Arts program cutting each unit’s spending by 2.5 percent and keeping vacant positions open as long as possible, despite the university hiring search firms to find two new administrators and an athletics director, all of which would earn six-figure salaries.

“You all don’t do enough work to warrant such massive paychecks,” the anonymous fliers read.

Three English professors drafted a petition in late November proposing all administrators earning over six figures should take a salary cut to dull the impact of the spending reductions. They have gathered almost 1,000 signatures. Reducing salaries by 30 percent on administrators making more than $300,000 could save the university $2.36 million, they calculated using data from Washington’s Office of Financial Management.

Schulz has directed senior administrators to forego a scheduled 1-percent salary increase this year and next fiscal year.

Elizabeth Siler, a clinical assistant professor of English and one of the petition’s authors, said she did not know who posted the fliers, but she understands their frustration.

“The proposals brought forth by the central administration have not been mindful of the central mission of the university,” Siler said.

WSU’s administration, she said, has forgotten that prospective students are attracted to quality of instructors, programs and student services, not a sprawling administration.

“What’s to say that putting more administrators in would get us back on track?” Siler said. “We tried that option and it didn’t work.”

Phil Weiler, who became vice president of marketing and communication when WSU created the position this year, said the administration is already feeling the effects of spending cuts, referring to forgoing the 1-percent raise. He said money that would have gone to those administrators will go to WSU’s reserves.

The university has invested a lot of money in opening the College of Medicine in Spokane, expanding the Everett campus and picking up the cost of raising faculty and staff salaries without help from the state government, he said.

He also said the university would likely only cut an employee’s pay if they were under threat of missing payroll.

WSU has responded to student complaints, Weiler said. After students protested the potential loss of some Multicultural Student Services counselors, the Division of Student Affairs came up with the money to fund those positions permanently. After graduate students spoke out about potential stipend cuts in the School of Mechanical and Electrical Engineering, the Voiland College of Engineering and Architecture found money to reduce their stipends by a few hundred dollars less.

Michael Poliakoff, president of American Council of Trustees and Alumni, said some costs of operating universities are unavoidable. But WSU may need to take another look at what it is paying for administration.

According to ACTA research, the average university in WSU’s classification spends 17 cents on administration for every dollar it spends on instruction, Poliakoff said. WSU spends 29 cents. He said he could not prescribe a solution because he has not looked specifically at WSU’s finances, but ACTA’s data could shed light on its financial priorities.

“When an institution is above the median, it might be an indication that funds are not being used for their maximum advantage to fulfill their prime objective [of teaching and learning],” Poliakoff said. “This is an issue that needs to be examined carefully at the university.”

WSU should also tread carefully, he said, because significant wage gaps between faculty and administration could corrode morale, hurting the university’s progress.

“Before a school does across-the-board cuts,” Poliakoff said, “it needs to take a long, hard look at other sectors, including administration, to see if there are places where funds could be trimmed.”