Beasley had season-high attendance for game against UC Davis 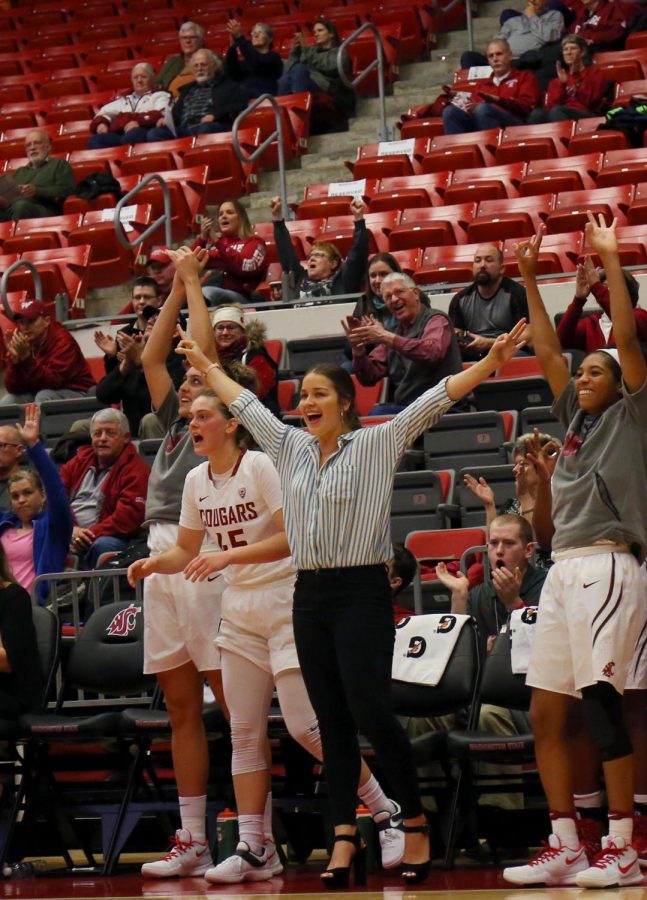 Fans, coaches and teammates cheer at women's basketball vs. St. Louis on Dec. 4.

The first six games of WSU men’s basketball season had a lot of Cougar fans asking, “Are we finally a basketball school again?”

Well, in order to be a “basketball school,” the students need to show up on game day.

“If you build it, they will come,” Kent said. “The next step is to get the students behind us, because it will allow us to take it to another level.”

A week later, on Dec. 2, University of California, Davis, came to Pullman to play the undefeated Cougars in front of a pedestrian number of fans and handed WSU its first loss of the season. The 3,183 fans was a season-high in attendance at Beasley Coliseum, but the arena wasn’t even a third of the way full.

Now let that sink in.

Flash forward one more week and now the Cougars (6-3) are on a sobering three-game losing streak. One loss surrendered to an inferior University of Idaho in Moscow, the other to a 2-6 University of Texas at El Paso team whose head coach resigned two weeks ago.

But the dream of reviving WSU’s “basketball school” persona is not dead. The process of rebranding WSU is tough because it truly takes two to tango. The players need the support of the student body, while the student body needs a reason to come support.

Look at how WSU’s opponents were able to support their respective teams in wins over the Cougars.

Both opponents managed to garner the support of their fan base, creating a hostile venue for WSU. Just eight miles east, Idaho filled Cowan Spectrum with a season-high 4,329 fans.

That may not seem like a dramatic increase to WSU’s season-high in attendance against UC Davis, but it is enough to fill 70 percent of Cowan Spectrum’s capacity.

Idaho Head Coach Don Verlin testified how much a full arena can help his players perform.

“It’s amazing when we get people in this building how electric it is and how much better we play,” Verlin said. “I appreciate the administration and the fans for coming out tonight and doing a good job of helping the Vandals win.”

Idaho played its best game of the season, posting a season-high in points against a Division I opponent.

Three days later, WSU fell to UTEP, which is currently in the midst of a head coach crisis. 6,341 Miner fans created a playing environment as hostile as Vandal fans did in Moscow.

“I want to thank everyone who came out, given the circumstances, which are unique, and I get that,” UTEP interim Head Coach Phil Johnson said. “The crowd helped a lot … it’s the most knowledgeable crowd in the country and I thought it gave us a big, big lift in the last five minutes.”

Surely, if UTEP can fill half of its arena, which has approximately the same capacity as Beasley Coliseum’s 12,000 for a nonconference matchup, WSU can do the same.

The latter part of Johnson’s quote is where the Cougars stand to benefit from higher attendance at their games. A team that capitalizes on opportunities to win late in the game is a sought-after attribute.

There will be one more opportunity this semester to catch a men’s basketball game, at 3 p.m. this Saturday when WSU hosts Indiana University – Purdue University Indianapolis.

For better, or for worse, it is safe to assume Cougar fans will learn more about this team by the time students return for the spring semester in January. WSU has a matchup against Kansas State University in Spokane, then road games against University of Southern California and University of California, Los Angeles, while students are on break.