Behind the press: Evergreen at risk from budget cuts 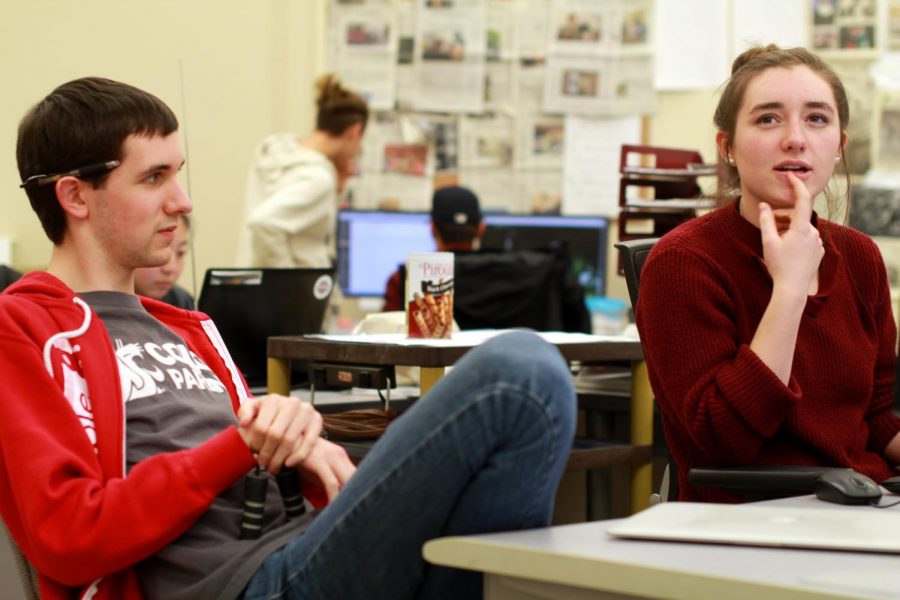 Then News Editor Rebecca White, right, trains her replacement Forrest Holt during the last night of production for the fall 2017 semester.

After generations of operating as a daily paper, the student-run, independent Daily Evergreen could be cut to two days a week following high budget projections that would drain our entire reserves.

Like many other departments across campus, Student Media’s budget is tight. While the official deficit projection is still uncertain, in an email Student Media Director Richard Miller sent Friday evening, the working deficit is $156,000. We have $136,000 in reserves.

Unless a new source of revenue is found, it is impossible to maintain the Evergreen’s current level of operation. Student Media cannot spend $156,000 and survive the next year. Throughout the years, we have relied on advertisement revenue to sustain what Services and Activities fees cannot.

Because our student-run Advertising Department sells ads to WSU, the recent cuts to all university departments disproportionately affect Student Media. The first 2.5 percent to be cut usually includes advertising and marketing. And by duplicating services offered in the city, the university competes with local businesses, reducing their resources to advertise as well.

We at the Evergreen were told we would have spring 2018 to find alternative revenue sources. We plan to propose a referendum to ASWSU for a $5 student fee, and to explore voluntary subscriptions from faculty and staff to support the Evergreen’s mission of informing the WSU community amongst other options.

Those plans to find funding for the Evergreen haven’t changed, but the urgency with which we have to execute them has grown. With fewer resources and more news than ever, this is the worst time to cut the area’s only free, independent news source.

While the university’s reserves have shrunk, its public relations arm has grown significantly. According to the University Fiscal Health website, the communication department spent $500,000 over its budget last fiscal year.

It also launched a new website this year, WSU Insider Beta, to write positive versions of the news stories the Evergreen covers. One example, “Arts and music programs continue to thrive at WSU,” highlighted all the programs the university still has now that administrators decided to cut Performing Arts at the end of the school year.

The primary goal of WSU News, WSU Magazine and WSU Insider is not transparency, giving the public the information it needs to make decisions. Instead, these “news” sources exist to highlight the successes of the institution and downplay its failures.

All governments are unreliable narrators when it comes to telling their own stories, and WSU is no exception. By reducing the most skeptical source of news on campus, the university is one step closer to monopolizing news and replacing it with positive PR.

That’s why protecting print, an unchangeable record of this university’s story, is essential. The Daily Evergreen’s website will never make as much of an impact as its front page.

This past semester, WSU administrators have attempted to reduce their $30 million deficit by forcing departments to reduce spending by 2.5 percent. Over a series of stories we reported that these cuts would entail reduced graduate student stipends, less funding to some environmental centers and possibly increased workloads for some faculty, not to mention the elimination of Performing Arts and several retention counselor positions. Student Affairs has since found funding for the counselor positions, amid outrage from students.

Besides budget reporting, we have conducted investigations, one of which revealed that university administrators may be letting corporate interests interfere with the academic freedom of their own faculty, an issue brought to light after the university’s battle with wolf researcher Robert Weilgus.

The Evergreen is the voice and ears of students. Our reporters have been barred from attending two Student Affairs budget meetings in their efforts to report on deficit issues.

We have attended forum after forum, on topics such as the new associate vice president searches. We also publicize canceled forums, like the student conduct forum, which has received very little public feedback or attention, despite the fact the Student Conduct Board has been operating under emergency rules for almost a year.

The Evergreen follows issues students are passionate about, such as the inclusion and safety of marginalized groups on campus, which after a year of unrest culminated in a sit-in at the beginning of fall semester.

We felt this story was important enough that it deserved more than a one-and-done approach, and we published at least three follow-up stories by sending a reporter to meetings with administrators, and asking one of the leaders of the sit-in for a progress update at the end of the semester.

Outside of our reporting, we increased the amount of public record requests and added a public records page, titled Transparency, on our website to give readers access to the same information we have, so they can evaluate the documents for themselves.

Printing daily isn’t only important as a legacy — it creates a physical archive that preserves information in its original form, whatever may happen to the digital copy.

We have experienced the dangers of digital copies firsthand. In 2012, the Evergreen’s servers caught fire, and all the digital records from 1997 to 2012 were lost. The bound print edition and WSU Library scans are all that remains of those years.

In its 123-year history, the Evergreen hasn’t always been a daily. For its first four years it operated as a monthly, upgrading to a weekly in 1899 and then a tri-weekly in 1923.

In 1950, it added daily to its flag, and ran Tuesday through Friday. Back then, four days a week was considered daily for college papers. It expanded to five days a week in 1980. Since then, it has brought to light many historic events throughout the history of both the Palouse and WSU.

Shawn Vestal, a columnist at The Spokesman Review, weighed in on the Evergreen’s situation.

If the Evergreen doesn’t receive support now, it will not exist as we know it. Donate here through the WSU Foundation to support us monetarily.

An emergency Student Publication Board meeting will be held at 4:15 p.m. Jan. 10 in Murrow 123. It is open to the public, and all are welcome.

Note: This has been updated from its original version.