WSU had 102 total yards, five first downs in first half 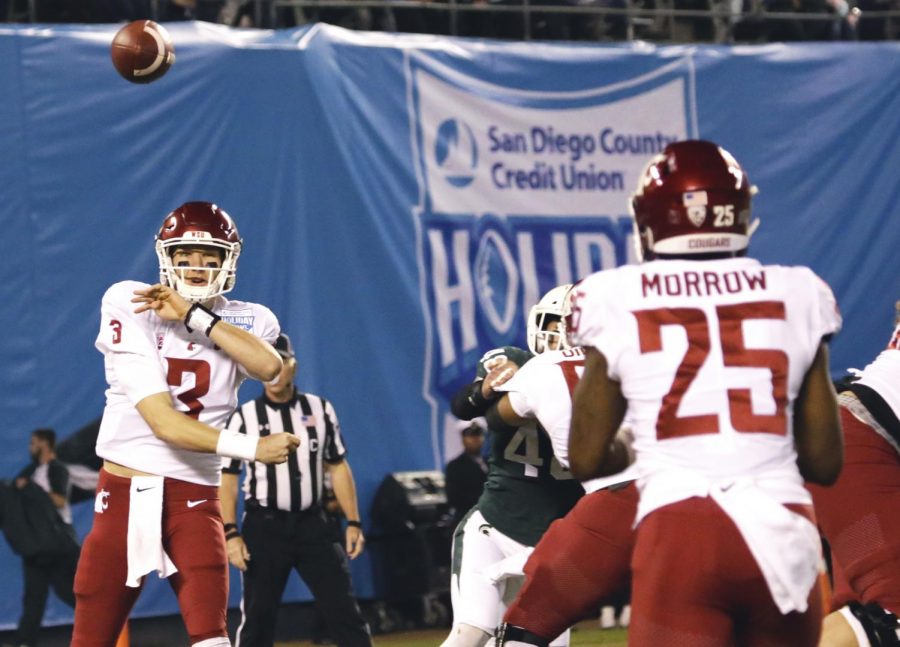 WSU football dropped its final game of the 2017 season to Michigan State University on Thursday in the Holiday Bowl. The final score was 35-17.

Redshirt senior quarterback Luke Falk was forced to sit out of the bowl game with an injury to his left wrist. This was Falk’s final game as a member of the team.

Falk threw passes in pregame warm-ups, but when the teams emerged from the locker room for kickoff he was in sweats. He has played with an injured left wrist all season, according to The Seattle Times.

Head Coach Mike Leach said the team was prepared to play without Falk.

“We had a sense that he wasn’t going to play, which is unfortunate because of what he’s done here,” Leach said, “but we had to look out for what’s in his best interests and in the best interests of the players.”

With Falk unable to play, redshirt sophomore quarterback Tyler Hilinski stepped in and made his first career start for the Cougars (9-4). Hilinski completed 39 of his 50 pass attempts for 272 yards, two touchdowns and one late interception.

The Cougar offense struggled in the first half of the game with Hilinski under center. WSU had 102 total yards of offense and five first downs at the half.

A 45-yard field goal by redshirt senior kicker Erik Powell was the only points the Cougars could muster in the first half.

On the other side of the field, the Spartans (10-3) scored three touchdowns in the second quarter and racked up 265 yards of offense in the first half. WSU trailed MSU 21-3 at halftime.

The Spartans got the ball to start the second half and drove 67 yards on 10 plays to score their fourth touchdown on the night. On the ensuing possession, Hilinski fumbled a handoff to redshirt sophomore running back James Williams and MSU recovered the loose ball. The Spartans punched the ball into the endzone seven minutes later to make it 35-3 MSU.

WSU was able to respond on their next drive when Hilinski found freshman wide receiver Tay Martin in the back of endzone for a 14-yard touchdown to make it 35-10.

Martin caught another touchdown pass about six minutes later to bring the Cougars within 18 points of the lead. He finished the night with seven receptions for 51 yards and two touchdowns.

Hilinski said it was nice to put some points on the board in the second half, but the offense was inconsistent all night.

“We just weren’t executing, was what it came down to,” Hilinksi said. “The three and outs really killed us. They had the ball for a long time, and just kept us off the field and we really couldn’t get in a rhythm.”

MSU scored a sixth touchdown when Spartan junior running back LJ Scott ran the ball in from 28 yards out with just over six minutes remaining in the game. Scott had 110 rushing yards and two touchdowns.

The WSU defense allowed the Spartans to rack up 440 total yards of offense in the game. The Cougars played without consensus All-American redshirt junior defensive lineman Hercules Mata’afa in the first half. He was ejected in the second half of the Apple Cup game against University of Washington for targeting, which caused him to be suspended for the first half of the Holiday Bowl.

Despite not playing in the bowl game, Falk finishes his WSU career as the Pac-12 career record holder in passing yards, passing touchdowns, total offense, completions and attempts.

The defeat gave WSU its second straight loss to end the season. With a win against MSU, the Cougars would have notched 10 wins for the first time since 2003.