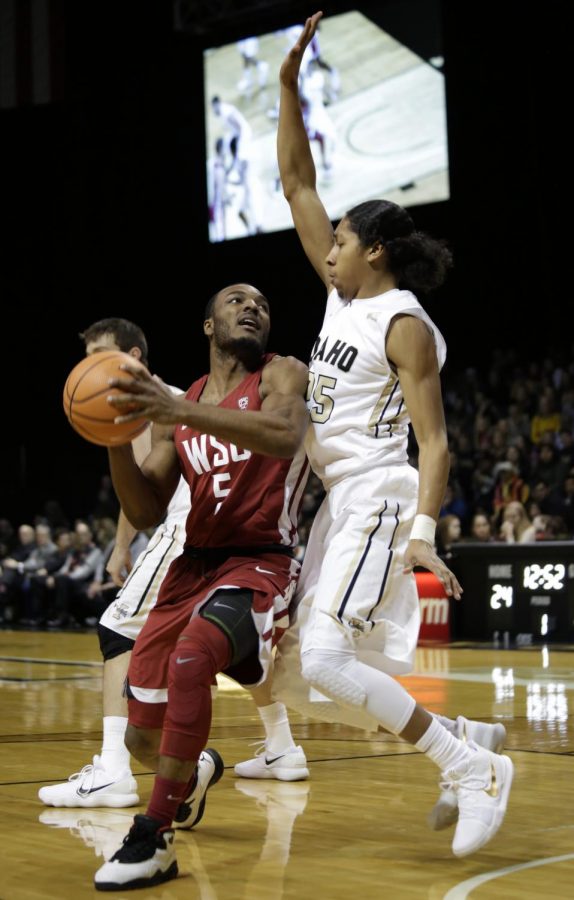 Redshirt freshman guard Milan Acquaah goes for a shot against Idaho on Dec. 6.

WSU men’s basketball failed to seal the deal in multiple late-game battles over the past few weeks.

The team collapsed on Saturday against rival school University of Washington. They led for 33 straight minutes before falling 70-65 to the Huskies.

The Cougars built a 10-point lead in the second half but soon lost their aggression, especially on the defensive end. UW capitalized on this by driving right to the rim and getting layups, possession after possession.

“It was like layup city at the basket,” WSU Head Coach Ernie Kent said. “They isolated our studs and drove them to the basket. And it wasn’t like they were shooting jump shots, they were getting layups.”

WSU junior guard Viont’e Daniels said the team got complacent when the lead grew to 10 points, which allowed the Huskies to climb back in it.

The defense crumbled. The Huskies converted on the offensive end, seemingly any time they wanted, shooting a whopping 73.9 percent from the field in the second half just by driving to the basket.

The defeat marks a third loss with no conference wins for the Cougars. Despite the fact that the Huskies are a tough team to beat, this is cause for concern considering the many Pac-12 games left to play this season.

WSU has experienced difficulties in conference play in recent history. The team won just one conference game in the 2015-16 season and six out of 12 last year. But the Cougs are looking to become competitors in the Pac-12.

“This conference is tough,” Kent said. “Every single game will be just a 40-minute version of your season and everything else, just going to be a dog fight.”

The team has young players — like sophomore guard Malachi Flynn and redshirt freshman guard Milan Acquaah — who they rely on and count on to learn quickly. The team needs these players to bring more consistency and step up in late-game situations.

The Cougs struggled to cinch wins in close games against University of Texas, El Paso, and Kansas State University, which is a trend they would like to avoid this season.

“I thought the [UW] game was very similar to UTEP, Kansas State, and even UCLA,” Kent said, “where there became a point in time in the game where we needed to dig our heels in and make tough plays, defensive stops, and we were not able to get it done.”

Since the Cougars’ surprising start this year, when they went 6-0 and beat then-No. 21-ranked Saint Mary’s College of California, they have been on quite the skid. They have dropped seven of their last nine games and are trying to get a hold on the season.

On the bright side, they have a long season ahead of them. An upcoming pair of home games this week gives them the perfect chance to rebound and grab a conference win.

Recent play may suggest the team is going nowhere fast, but the Cougars have plenty of time to turn the season back in the right direction.