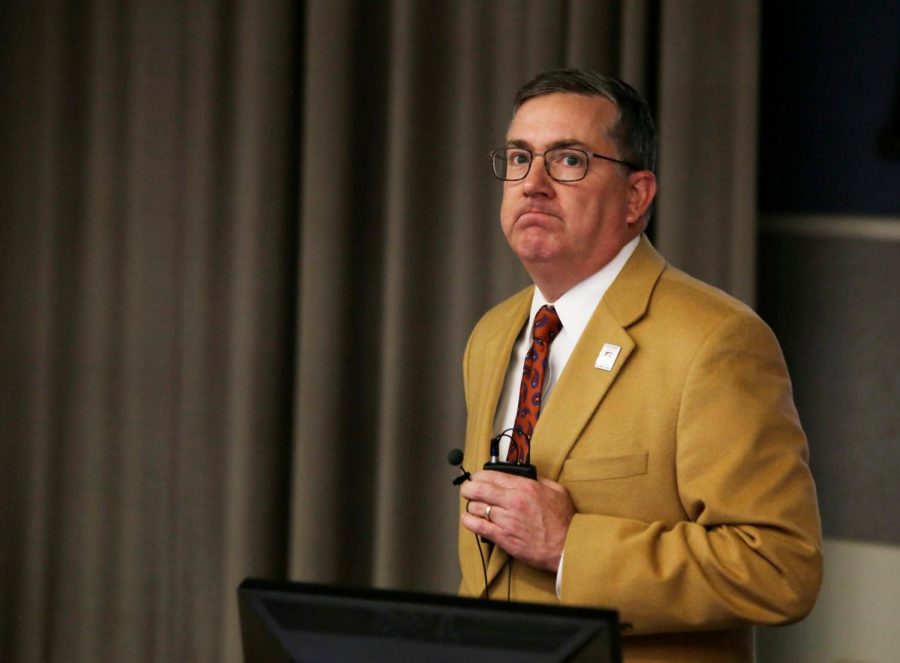 WSU President Kirk Schulz speaks at a Faculty Senate meeting in November regarding spending reductions During his time at Kansas State University, he faced budget issue similar to WSU's.

Before arriving in Pullman, he oversaw Kansas State University across nearly a decade of scarce funding. Now, after a semester of backlash against his administration over program and personnel cuts, WSU’s plight and Schulz’s financial decision-making in some ways parallel his time at K-State.

One of the most “egregious” incidents at KSU, according to former Faculty Senate president and associate professor emeritus Dave Rintoul, involved administrative hires and raises at a time when faculty remained “chronically underpaid.”

“Raises for the folks doing the teaching and research were seemingly never a priority for our administration,” Rintoul said.

Until Schulz’s final year in Manhattan, Kansas, faculty salaries consistently fell $7,000 – $10,000 short of the peer median of $83,000. A 2013 article in The Mercury, Manhattan’s local newspaper, stated over 500 faculty members signed a resolution, which they presented to Schulz, demanding higher pay. The university then instituted a three-year plan to increase salaries, and they have since risen, but not reached the median.

Phil Weiler, WSU’s vice president of marketing and communication, noted that the term “administration” generally includes many employees who work directly with students, such as counselors and tutors, rather than just high-paid positions like vice presidents and deans.

Regarding high-paid positions, Schulz — who declined to be interviewed for this article after multiple requests in recent weeks — has so far added Weiler’s position at WSU, and is looking to hire a vice president of community, equity and inclusive excellence, who would have a six-figure salary.

Faculty in WSU’s English department recently obtained more than 1,000 signatures for a petition requesting cuts to administrative salaries. With the resulting money, they hope to replace the current budget reduction plan and avoid the hardships it entails for personnel and programs.

Regent Mike Worthy, who led the presidential search committee that selected Schulz in March 2016, was unavailable to comment. However, he pointed to a list of “essential qualifications,” based on which the committee evaluated candidates.

One of these reads, “An astute understanding of university finances, or their equivalent, and the relationships between academic priorities and budgeting, and the ability to marshal relevant information and data to inform decision making.”

A second qualification was “A highly developed understanding of academic values and culture; demonstrated appreciation of and support for scholarly work and academic excellence … and a commitment to the importance of undergraduate instruction and education.”

When it comes to merging the two, understanding of academic values and budgeting, some at WSU feel Schulz has neglected to include faculty voices in financial decision-making.

Donna Potts, a faculty senator and president of WSU’s chapter of the Association of American University Professors, worked with Schulz at KSU for the first few years of his tenure. They received relatively little financial support from Kansas’ conservative Legislature, and Potts recalled Schulz’s handling of budget crises favorably.

At KSU, another land-grant institution, Schulz replaced a president who frequently undermined faculty, Potts said. Upon his hiring, he promised transparency, and in some ways delivered. He solicited suggestions from faculty on how best to reduce spending, and even waived his own salary raise for at least one year, Potts said.

But in Pullman, she said, Schulz seems to have lost his sympathy for other perspectives.

Instead, as WSU struggles to rein in its spending with 2.5-percent cuts to each university unit, the administration decided without faculty input to cut Multicultural Student Services retention counselors and the Performing Arts program.

Though WSU has since agreed to retain the counselors amid student outrage, Potts said that in her subsequent communication with Schulz, he has not shown interest in pursuing other funding sources for Performing Arts.

She recalled that when he came to WSU, he claimed financial issues would be less of a problem in Washington, which spends more money on higher education. In an interview with The Mercury just before he left for Pullman, Schulz said WSU had “some resources to grow,” thanks to a more supportive Legislature.

“But now we’re in a worse predicament than we ever were at Kansas State,” Potts said.

And that’s saying something, according to Rintoul. He described the past decade or so at K-State as one long budget crisis, which he attributed largely to inadequate state funding.

Another qualm some people had with Schulz, Rintoul said, was his sometimes ill-considered approach to building projects. In one example, Schulz committed K-State to spending $15 million on a new business building without first securing full funding — a practice he rejected when addressing WSU’s past spending behavior.

As a result, a student committee had to approve a $4 student fee in April to pay for the building, according to The Collegian, KSU’s student newspaper. However, even the students who voted in favor did so only because they felt they had no option.

“We passed this because we were forced to,” said Victor Valdez, a Student Governing Association senator, according to The Collegian. “I don’t want this fee, right, but we all understand that we need to pay this fee because we promised [the money for the business building].”

Rintoul agreed with Potts that while he was Faculty Senate president, they had a stable model of shared governance with administrators, at least on paper. He met with Schulz and the provost regularly and had time to convey faculty opinions to them.

However, he said Schulz’s administration did not always act with those opinions in mind.

“We certainly had his ear, and he certainly seemed sympathetic,” Rintoul said. “But when push comes to shove, they do what they want to do.”

He said the KSU community generally remembers Schulz positively. He was smart, friendly, “schmoozy” — a good salesman. During his tenure, K-State saw several record-breaking years for fundraising, and Schulz initiated the K-State 2025 plan, similar to the “Drive to 25” he has established here.

But many faculty senators and other university leaders, who saw behind the scenes, still have a bone to pick.

“The buildings, and the shenanigans that happened, and the things that should’ve happened but didn’t,” Rintoul said.

“That, I think, is the real legacy. That is sort of buried, and will remained buried for a long time.”