Schulz must do more to encourage voting 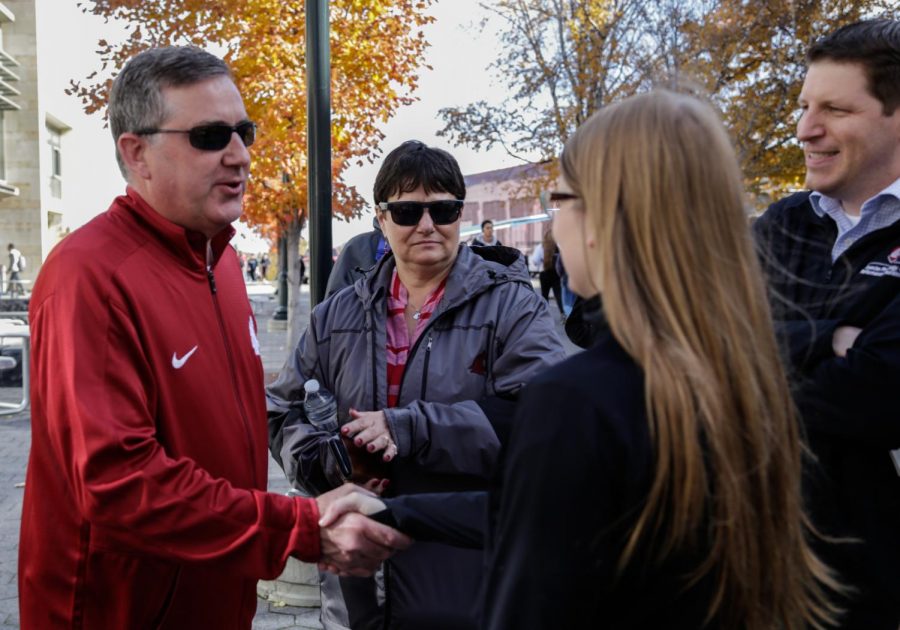 Kirk Schulz shakes hands with then senior kinesiology major Ariel Bowman while participating in a student-organized walk for Exercise is Medicine On Campus on Oct. 23. The walk promotes physical health and awareness for the WSU community.

President Kirk Schulz neglected Pullman during one of its pivotal periods in the 2017 local elections. The elections not only shape the leadership of our city, but also impact every citizen in it. Schulz ignored his local constituents’ non-partisan call to remind our community to simply register to vote on National Voter Registration Day, Sept. 26. Our WSU president should no longer ignore his community’s calls for support in its most important civic engagement right.

On Sept. 9, 2017, Elizabeth Siler, a WSU clinical assistant professor of English, emailed Schulz in a joint email with her husband, Patrick Siler, explaining the nature and procedures of voter registration in Washington. In addition, she emphasized how our state doesn’t register its residents by political party.

Her email stated, “Can you help the non-partisan effort to get people registered? An email from you to every student and employee of this university simply reminding them to register.” The email further stated, “You’ll be pleased to know that registration in Washington State is completely non-partisan. We do not register by parties in this state.”

At the end of the email, Siler also stated to Schulz that there would be local elections coming soon after Sept. 26, and a letter on the campus email system would encourage the community to participate.

The president’s shockingly short response eight days later stated only, “Pat and Elizabeth-Just a quick note to let you know I received this. Let me see what we are permitted to do.” He never sent any campus letters regarding voter registration or the local elections, and never communicated to Siler what he was permitted to do.

Schulz’s job description on the WSU Office of the President Responsibilities page states he is the academic and community leader who defines the vision of the university. He also represents a wide constituency of participants in our community’s civic engagement, from students and faculty to community members.

In a Spokesman-Review article last week, Gov. Jay Inslee expressed concerns over the unheard voices in Washington through a series of proposals to the state Legislature. The hope is to get as many registered Washington residents as possible. National Voter Registration Day has always been a great opportunity for that.

Despite the national conversations on voting challenges, and living in a state that has an impartial and a relatively easy voter registration process, Schulz refused a neutral civic engagement opportunity for our city and continues to be silent. Such refusal likely contributed to the low voter turnout in the city council and school district elections.

Pullman School District elections crucially impact teachers and, most importantly, children. Its overall voter turnout was 23 percent, according to the president of Pullman paraeducators Yelonda Wilke.

“The children are the most important part of the equation,” Wilke said. “Speaking about change will not make change happen. Engaging and voting will.”

In the past, Schulz has often expressed his neutral stance on many issues, justified by support for the First Amendment. As a student leader and a writer, I’ll use my First Amendment right to tell Schulz:

Neutrality is usually a wise choice for vigilant leaders; however, hesitation indicates uncertainty over unknown consequences. The only consequences of more registered voters, especially in a city that is in a state with the impartial registration advantage, are a widespread platform of democracy and a better representation of our people. The 24th Amendment is as significant as the first, if not more crucial to our representation in office.

By the rules of your occupation and law, you are permitted to encourage your community in a non-partisan letter to register and be more politically engaged. You’re not required to, but it’s the right thing to do.

I would like to also remind you that the next pivotal period in our country will be in November, during the midterm elections. Registered voters, including myself, still have hopes and expectations that you will do the right thing next National Voter Registration day.