A visitor from the stars 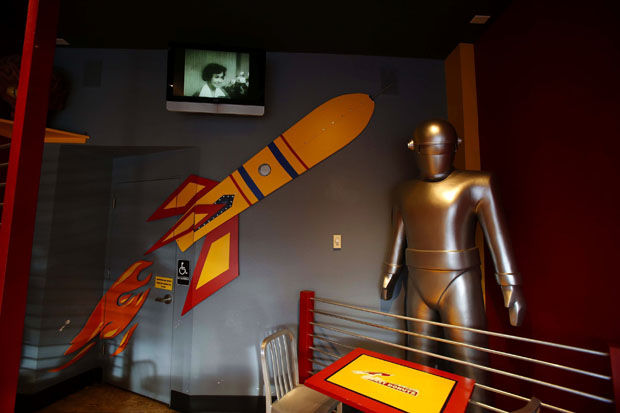 On a Halloween night, a tale shall be told: about a boy, an alien, and a giant robot.

“This is the radio drama based off the original 1951 movie,” said show director Kirstin Lincoln. “It’s a classic, ‘50s sci-fi (film).”

Lincoln said the story tells of an alien named Klaatu, who comes to Earth to warn the people that playing with atomic energy is making the rest of the universe’s societies nervous. Unfortunately, he landed right in the middle of the Cold War era and is shot and forced to escape.

But this is not a traditional play. Instead, it’s set up how a radio drama would look and sound in the 1950s. The actors are in costume, but do not move around the stage. They speak into microphones and make sound effects as if they were broadcasting the performance on the radio.

“I would say it takes the audience back to 1954, when this was being put on,” said Pullman City Councilmember Nathan Weller. “It really immerses the audience into that experience.”

Weller plays the parts of the narrator, a newscaster, a radio voice, and announcer. Much of the cast play more than one role similarly to Weller. To distinguish between each role, the actor must work with different accents or voice techniques.

Weller said he tried to pick unique voices for each of his roles. Many of the differences lie in how he speaks and also how he positions himself on stage. He can’t jump around on stage, so subtle movements and gestures are needed, he said.

The actors and director prepared for the show in two weeks, taking time to sit down and read through the script. Because no blocking or line memorization was needed, the actors could take the time to learn transitions, cues, and how to develop the voices for their characters.

“(Rehearsals were) awesome because it was short. This would’ve been (my character) on the radio so voice becomes the primary instrument,” said UI doctoral student Syndie Allen, who plays the mother Helen Benson.

Allen said Helen is at first a very boring character, but at some point in the show becomes very multidimensional and more rounded. She said she liked how Helen portrays a more progressive female character for the time period of the show.

One example is Helen’s rejections of marriage proposals when the expectations of the day would’ve dictated she take another husband after hers died in the war.

Apart from the voices, the sound effects are all created for the audience by the actors themselves, usually using household appliances like egg beaters. The technique is referred to as Foley sound effects, and everything from the sound of people walking to the spaceship is created by the actors.

The cast had its obstacles to jump over. This is Weller’s first time acting, and Allen had to learn to enunciate with braces on. But both actors said they enjoyed the show and their characters.

“The Day the Earth Stood Still” will show at Pullman Civic Theatre on Nye Street, behind Dissmore’s IGA. The hourlong show starts at 7:30 p.m., and tickets cost $5.