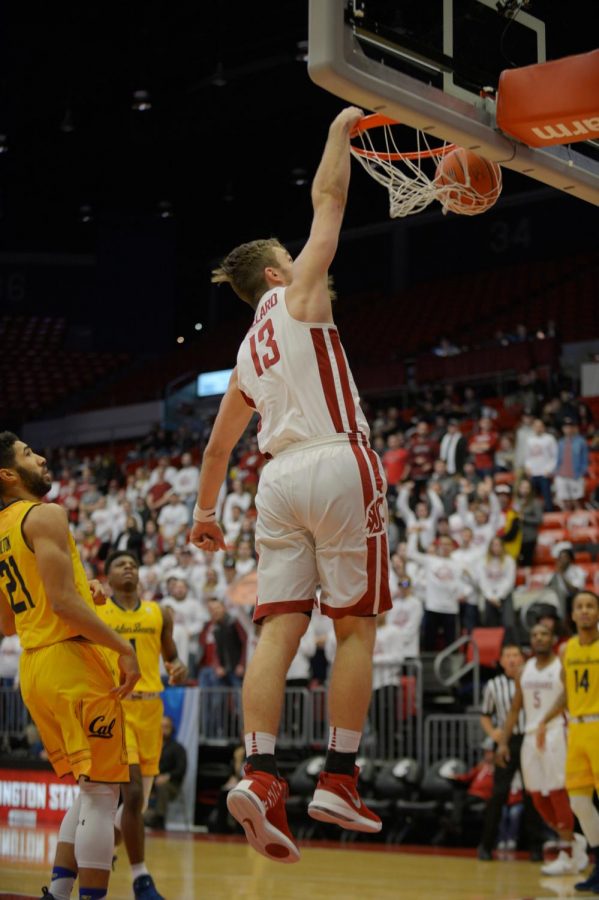 WSU men’s basketball powered its way past University of California, Berkeley by a score of 78-53 Saturday to claim their first conference win of the season.

The victory came on the back of a historic shooting performance by junior forward Robert Franks, who made the corners of the court his three-point sanctuary, nailing 10 threes and finishing the game with a career high 34 points.

“For [Franks] to get into that type of a groove, and for these guys to really look for him and help him get that record. No disrespect to Cal … when you’re that close you need to get a record like that,” WSU Head Coach Ernie Kent said.

With a sloppy start that included 10 turnovers in the first half, the Cougars found themselves on track for another game with 20 or more turnovers. But due to an excellent defensive effort led by junior guard Viont’e Daniels, who held Cal’s leading scorer junior guard Don Coleman to just two points in the first half, WSU went to the locker room with a five-point lead.

“We knew [Coleman] would get a lot of shots up, [Daniels] did a great job on him,” sophomore point guard Malachi Flynn said. “I’m pretty sure [Daniels] had him for pretty much 85 percent of the game, so a lot of credit to [Daniels]. He always steps up and takes the challenge of guarding the toughest player on the other team.”

WSU found their stride in the second half, which propelled them to the double-digit victory margin. Franks hit seven of his ten threes in the second half and led his team to shoot over 70 percent from the field.

Fifth year senior point forward Drick Bernstine flirted with a triple-double, falling just one assist and four rebounds shy of the mark. His unselfishness and leadership among his team has helped the Cougars get rid of their four-game losing streak, Kent said.

“For us to have 22 assists in this game, [Bernstine] is the reason for that,” Kent said. “He is so unselfish. As a fifth year senior coming to your program you would think he would want to take every shot, this is his last go-around. He is the most unselfish basketball player I have ever been around.”

Following the game, Kent gave a tip of the cap to the ZZU CRU, who put on the third annual “Weekend at Ernie’s.”

“I think we need a ‘Weekend at Ernie’s’ every weekend from here on out,” Kent said. “Just keep bringing in different shirts because the students certainly responded, we responded, and it was just a good game for us to play.”