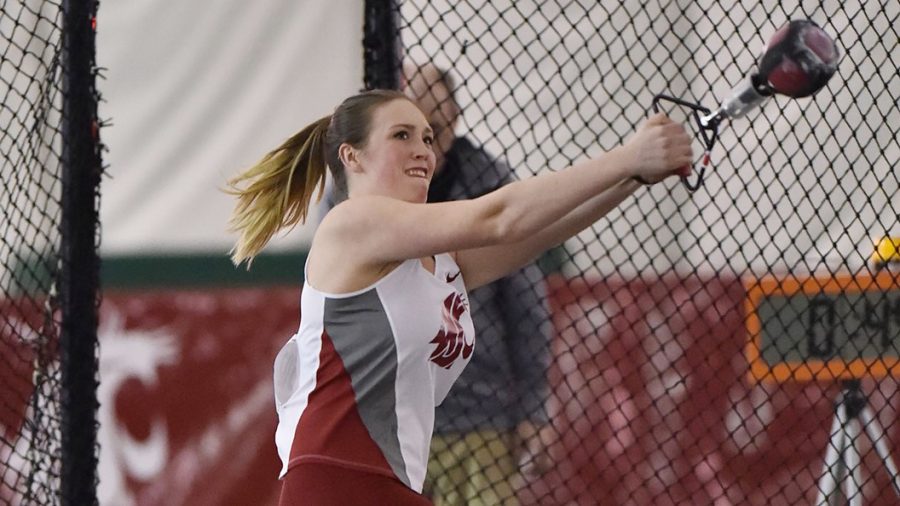 WSU Track and Field opened their season with a pair of meets, as the team participated in the Ed Jacoby Invitational in Nampa, Idaho, as well as the UW Indoor Preview on Saturday.

Redshirt sophomore Aoife Martin got things started for the Cougars on the first day of the Ed Jacoby Invitational, winning the women’s weight throw with a final distance of 17.19 meters.

Freshman Jeremiah Stone took third place in his first collegiate meet, with a final distance of 13.76 meters in the Men’s Triple jump.

Saturday afternoon in Nampa, junior Stephanie Cho took first in the women’s 400 meter dash with a final time of 56.35 seconds and redshirt junior Adreonia Bradley finished in seventh place. Four Cougars placed in the Men’s 400 meter dash, where freshman Jake Ulrich got the winning time of 48.95 seconds with sophomore Corey Allen closely behind him in second place.

WSU then finished off the Ed Jacoby invitational with a bang, winning the Men’s 4×400 meter relay by just over two seconds.

While most of the team was competing in Nampa, Cougar poll-vaulters, distance runners and high jumpers were in Seattle at the UW Indoor Preview.

The Cougars didn’t see as much success at the UW Indoor Preview, but the women did earn a couple of fourth places on the day. Redshirt sophomore Molly Scharmann came in a four way tie for fourth place in women’s pole vaulting with a final height of 3.91 meters, while redshirt sophomore Natalie Ackerley finished fourth in the women’s 800 meter run.

On the Men’s side, junior Keelan Halligan finished fourth in the high jump with a final height of two meters.

The Cougars will now prepare for their next meet, the WSU Indoor Open this Friday and Saturday at the Indoor Practice Facility.