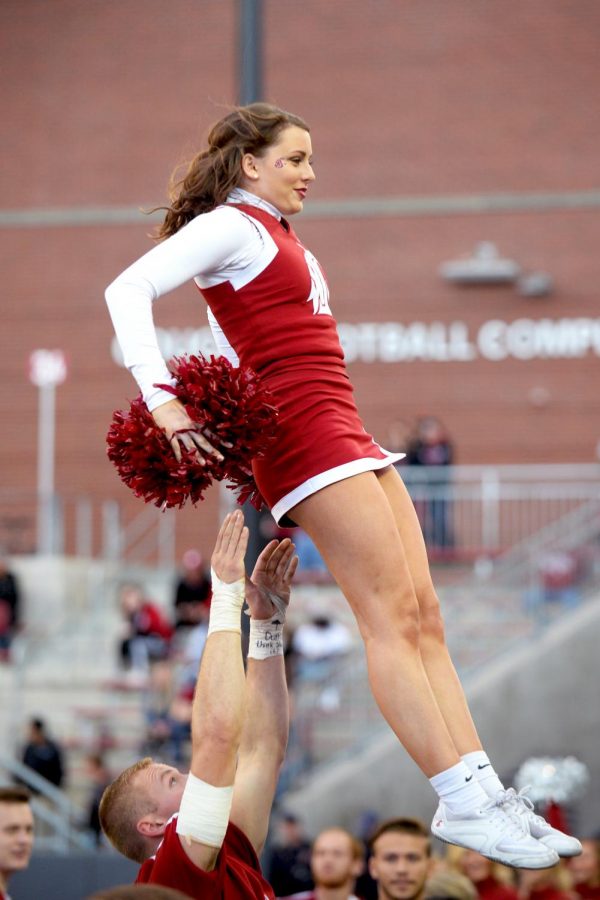 A WSU cheerleader is lifted into the air at a WSU football game against Nevada on Sept. 23

Both squads placed highest in school history. The cheer team placed sixth in the Cheer Coed Division IA against 21 other teams, while the Crimson Girls placed eighth in Dance Division Jazz IA facing 22 other teams. Both Cheer and the Crimson Girls had just around two minutes for their routines.

Spirit Coordinator and Head Cheer Coach Chris Opheim said the heart of his athletes propelled them to success.

“This has been the best group of kids I’ve coached here at WSU,” Opheim said in a WSU news release. “This is why heart and effort matter so much. One of our ending pyramids had a bobble and it could have fallen down, but they kept it up. That was the difference between sixth and 14th.”

This year’s competition marked the fifth straight year WSU Cheer and Crimson Girls competed in the national championships. It was held at ESPN’s Wide World of Sports Complex.

“The Crimson Girls really executed their emotionally-charged routine,” Wallace said in a WSU news release. “We had people say the routine was emotionally eye-catching and that they couldn’t watch it without feeling every emotion. That was our goal, to bring emotion to the spectators.”