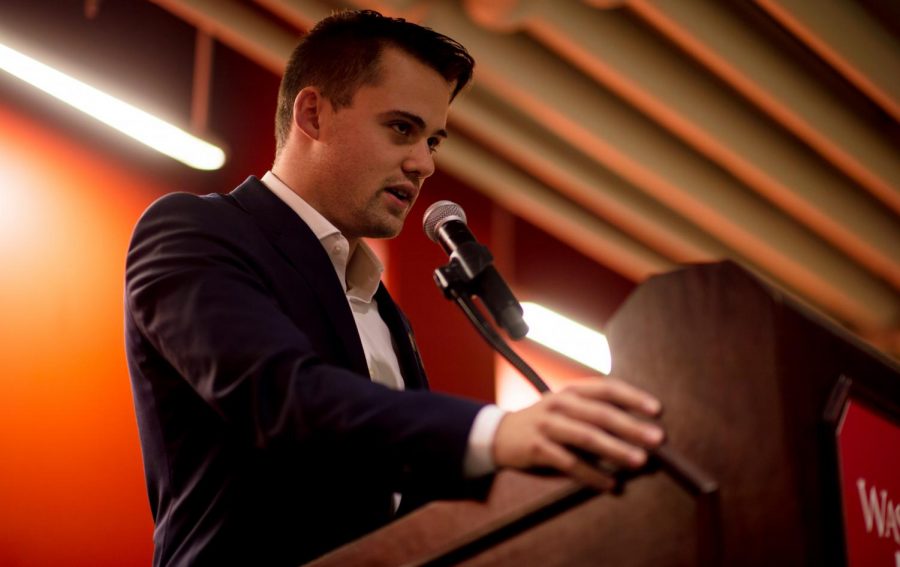 Former WSU Young Republican President James Allsup speaks at a debate on Oct. 12, 2016. Allsup’s account was one of the many shut down by Twitter last month due to their new regulations on abuse and violence.

When Twitter deactivated the accounts of several prominent leaders of the alt-right movement, they made a decision that is related to politics, but not political in nature. While the site likely helped to mitigate the issue of bullying and harassment on their site, the problem is far from solved.

Public companies like Twitter have a vested interest in keeping their shareholders satisfied by demonstrating healthy fiscal growth. Since the majority of Twitter’s income is based on web traffic and advertising, keeping a positive public image to grow their user base is crucial.

Deactivating these accounts is not a statement of political affiliation but rather an effort to maintain a good relationship with the public. According to Samuel C. Rhodes, Ph.D. candidate and instructor in political science, Twitter is merely behaving how any corporation with shaky PR would.

“They made, probably, a calculation that they had more to gain by expelling some of these accounts than by keeping them on,” Rhodes said. “But again, I imagine that this is a profit-driven motive. I don’t think it’s necessarily political.”

Some people were concerned with whether this decision violated the First Amendment. However, Twitter is likely safe from any consequences related to censorship because they claim these accounts were violating the terms of service required to use the site’s features.

Some examples of these violations include actions from individuals like Milo Yiannopoulos, former WSU College Republicans President James Allsup and other alt-right affiliated users. Twitter stated their abusive and harassing behavior violated the terms of use.

Many companies that provide services like social media have service terms that users must adhere to in order to use of the program. Among Twitter’s revised terms are stronger provisions intended to prevent bullying, harassment and hate speech, issues that have been present on Twitter since its launch in 2006.

“Twitter is a publicly traded corporation [on the] stock market,” Rhodes said. “They have developed probably a bad PR reputation at this point for having a platform that has this reputation for allowing hateful language to perpetuate.”

But social media sites like Twitter are not entirely to blame for these problems. The true problem is twofold: it includes the common misconception that conversations and arguments on social media result in political progress, and the fact that when a group becomes restricted by one access channel, they will inevitably find another way to spread their message.

“It’s sort of like the Whack-A-Mole game,” Rhodes said. “If you tell a group of people that they can’t use one platform, by the nature of the internet and capitalism, some other platform is inevitably going to take its place.”

Solving the issue of the Whack-A-Mole game might be impossible due to the sheer size of the internet, but taking steps towards civilized discussion is well within the power of average citizens. Using the internet to make political progress can be successful, but it takes a concerted effort beyond petty squabbles and unmoderated “debates” to accomplish anything meaningful.

In more ways than one, social media limits people’s ability to develop their ideas about policy and politics. Rhodes suggests that other resources like the Foley Center, College Republicans and Young Democrats and even the classroom are all great places for political discussion, and will likely result in a more mature and respectful exchange of ideas.

No one has ever advanced democracy using their tweets or social media skills. They are great for the surface level of political understanding, but can’t give citizens the moderated and deep discussions that are found in dedicated political forums and in-person resources.

Media theorist Marshall McLuhan said, “We become what we behold. We shape our tools and then our tools shape us.”

If you want to talk about politics, don’t be a bully. Engage with your peers respectfully; politics is about fixing problems, not people.