Women who enjoy gaming agree that online players can be aggressive in general, not just to women 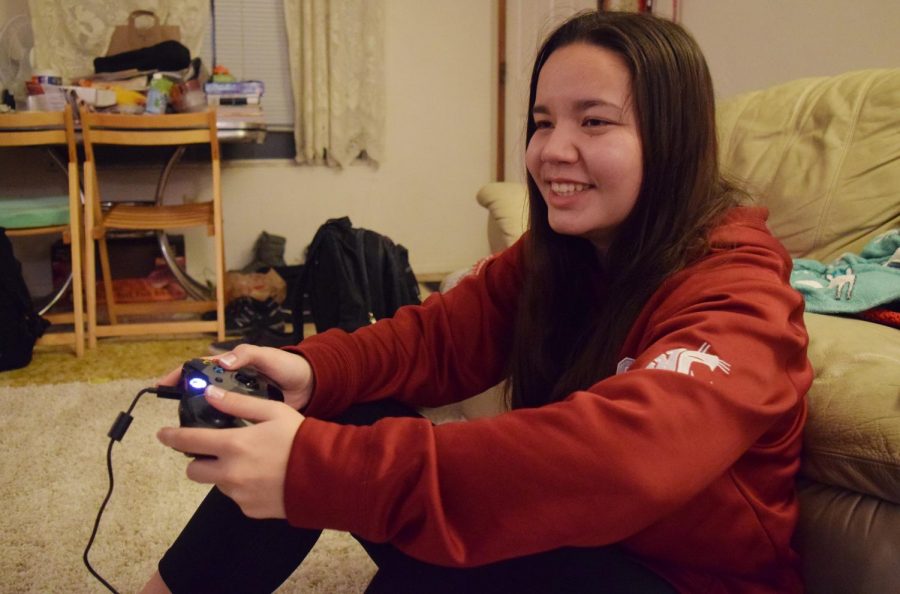 Sophomore Lexi Fredrickson takes a break from school to play video games. Female gamers exist and are probably better than you.

The need for diversity is often advertised on the social radar, but some factions of our culture remain represented primarily by a single demographic. Both console and computer gaming fall into this trap, where men generally dominate professional and casual play.

Despite the surface appearance, however, female gamers are becoming more prominent representatives of the community. Senior Japanese and Spanish double major Makenna Smith commented on this trend and provided insight into the culture around female gamers.

“I’ve been playing games for about as long as I can remember,” Smith said. “If you prove yourself with boys at a young age, there’s less prejudice. It hasn’t developed yet.”

Smith added that she hadn’t encountered any open discrimination in person. Online, however, she found a different story.

“The online community is absolutely garbage,” she said. “I’ve heard all those ‘get back to the kitchen’ jokes. It’s getting old now. And besides, there’s knives in the kitchen, you know.”

Smith attributed this behavior in part to anonymity, as players can communicate however they want without consequence. There are even disclaimers from the Entertainment Software Rating Board, which state that online player interactions are not rated.

Junior English major Shania Sheehan also mentioned the hostile nature of online interactions, but saw it as more of an all-around problem. “Female or not, I feel like [online gamers] can be pretty abrasive to each other,” she said. “It’s easy because they’re behind a screen.”

Sheehan, like Smith, started gaming at an early age, playing with her father’s older consoles like Nintendo 64. It soon became something she loved and helped her to find people who shared her interest. She also formed friendships with other gamers through a video game design club — all of whom, she said, are guys.

Nonetheless, Sheehan believed the ideas around female gamers are changing. “It used to be really weird to be a female gamer,” she said. “But something shifted in the past few years, so it’s not so weird anymore. People aren’t as surprised by it.”

Though female gamers are becoming less of a rare breed, they are still noticeably absent in the professional world of gaming. The first-ever Overwatch League, an eSports event that began on Jan. 10, featured no female players. While the leagues aren’t intentionally discriminatory, there is often difficulty finding professional female players.

“As a whole, the community could stand to integrate better,” Smith said. “Both sides have things to work on. There’s really no easy answer because it’s people, and they have to change.”

To counteract this problem, Smith suggested female gamers support each other vocally and invite men to do the same. As for encouraging other women to get involved in the gaming community, she said single-player and story-driven games are a good place for late bloomers to start.

Sheehan also recommended story-based games, though not just for first-timers.

“If you want to be immersed into a story where you control your own actions,” she said, “pick up a video game instead of a book.”