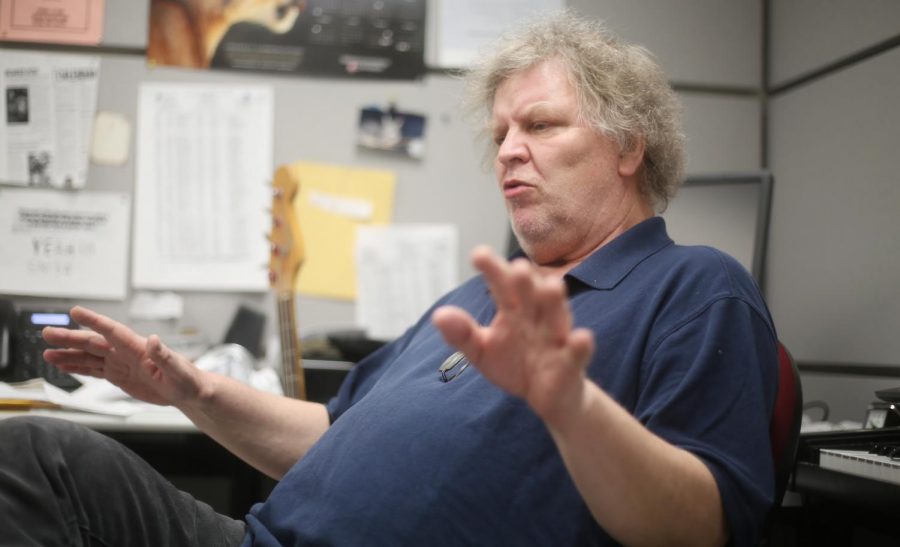 Dave Snider talks about the culture shock he experienced at the most memorable concert he played during his long and tenured career.

WSU School of Music professor Dave Snider’s eccentric style influences the instruction of his music: jazz bass, jazz combo, jazz history and history of rock and roll courses. While his profile picture on the School of Music page may reflect a tame bassist, he’s a firm believer in the phrase “party on!”

Snider started instructing at WSU in January 2003, after 24 years in the Air Force. During his service, he played electric, string bass and arranged music for the Air Force bands with which he was affiliated. In that timeframe, he arranged over 500 music compositions.

He started arranging music back in the sixties, influenced by bands like Tower of Power and Chicago’s strong horn sections. He then decided he needed to incorporate horns in his work, so he started writing them into his music. Influenced by the popular music of his time, he developed a heavy jazz and funk sound, still evident in his bass playing.

“I play everything from rock to jazz to funk to disco,” Snider said. “I do pretty much everything.”

Many of his original arrangements have been published internationally through Walrus Music.

In the Air Force Band and during his civilian music career, Snider was able to travel all over the world. One of the most memorable experiences he had was his trip to Turkey, where he played in a Greek-style amphitheater in front of 40,000 people. He said they played for more than two and half hours in almost complete darkness.

“We started playing ‘Born in The USA’ and the audience was going nuts because we did it just like Bruce Springsteen,” he said. “When the lights came on, we saw that it was all guys in the audience because in Turkey, they didn’t allow girls in. It was a totally different culture and a major cultural shock.”

As an American who lives in a country that’s no longer segregated by race or sex, Snider said he didn’t jive with the cultural norms of 1980s Turkey.

He said his personality has developed through the experiences he’s had performing and traveling.

“I enjoy what I do so much that sometimes it rubs people the wrong way, but I don’t care,” he said. “When I play, I’m not bulls——- anybody because I play from the heart, so if you don’t like what I’m doing, you have no heart.”

Looking back over his 55-year music career, Snider advised students to go into a business that they love and find something that doesn’t feel like work, because he believes that will help them enjoy life a little bit more.

“I love music,” he said. “I could have gone another way and tried to make more money, but I love music, and it’s something that I did well. You have to stick with it and put the time in.”