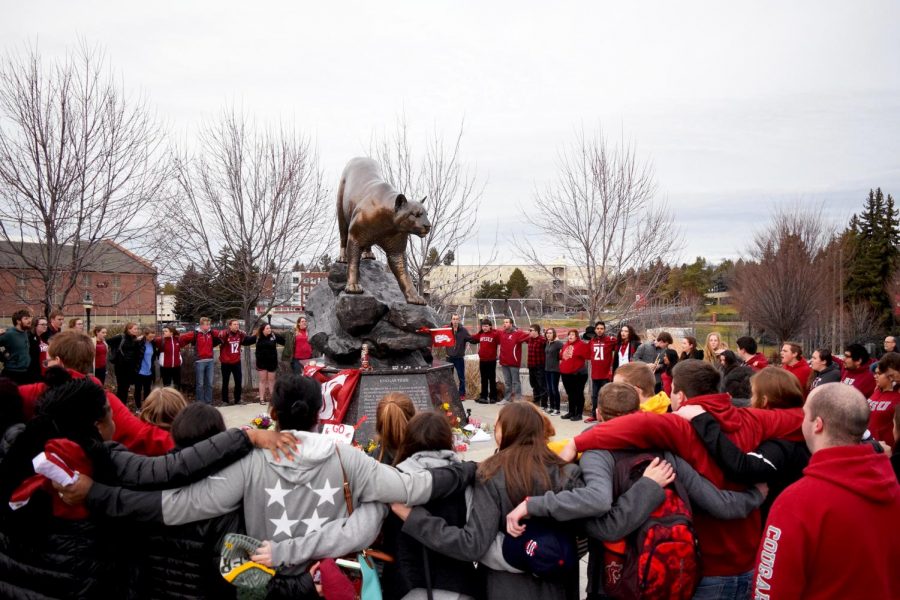 Students and locals gather to sing the WSU Alma Mater, “Washington, My Washington,” to pay respects to Tyler Hilinski at the Cougar Pride statue Jan. 17.

Despite the cold, bystanders stood with arms on shoulders to support one another while others cut through the middle of the circle to hug those weeping on the other side.

Around 150 students, faculty and Pullman residents gathered outside of the Cougar Pride sculpture on Stadium Way to honor the life of redshirt sophomore quarterback Tyler Hilinski, who died from an apparent suicide Tuesday night.

After the song ended and the circle dispersed, many members of the WSU Cougar Marching Band stood in their own informal group, talking quietly.

Junior music education and instrumental major Rick Flores, who is a member of the band and a former classmate of Hilinski, organized the tribute. Flores characterized Hilinski as “positive, humble and energetic,” and “proud to be a Coug.”

“When I came here last night I was just thinking of a song fitting for the moment,” Flores said. “The only thing I could think of was the Alma Mater. It’s the only thing that truly fits what we’re all feeling right now.”

Many who didn’t personally know Hilinski came to pay their respects. Flowers, Coug flags and signs surrounded the Cougar statue placed by friends, family and strangers. Written in chalk were the sayings “Fly high angel,” and “I’ll miss you Ty,” along with his number three.

Among the attendees, senior broadcast journalism major Doug Taylor said he was in absolute shock upon receiving the news of Hilinski’s death. Taylor broadcast Hilinski’s last game in the Holiday Bowl for WSU’s student radio KUGR.

“It was just really sad to hear last night that there was so much pain going on,” Taylor said. “And that he didn’t feel like he could reach out to anyone is tragic. As you can see, it has affected a lot of people very deeply.”

If you are in need of emotional support, call the 24-hour National Suicide Prevention Lifeline at 1-800-273-8255. It is a confidential service to those in distress.

WSU Counseling and Psychological Services can also be reached online at counsel.wsu.edu and over the phone after hours at 509-335-2159.

This story has been updated from its original version.