WSU will travel to Seattle looking for season sweep of Huskies 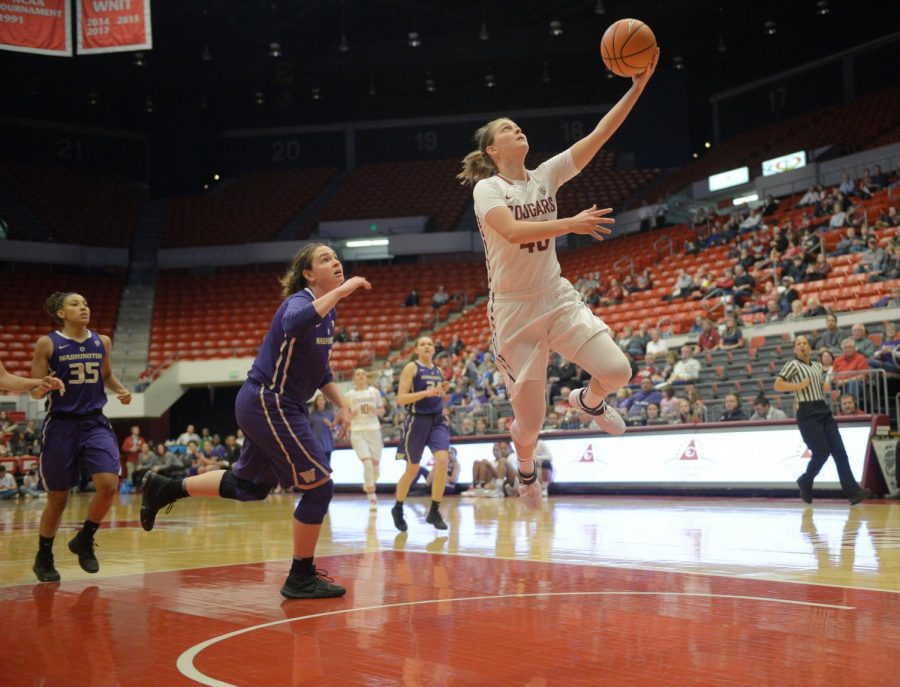 Then-redshirt sophomore forward Borislava Hristova jumps up for the ball against UW on Jan. 17, 2018 in Beasley Coliseum.

WSU women’s basketball will make its way across the Cascade Mountains for a matchup with University of Washington on Sunday.

The victory over the Huskies (6-12, 0-7) on Wednesday gave the Cougs (9-10, 2-5) their first win after three straight conference losses. They hope to ride the momentum of this win and bring that into their game against UW on Sunday in Seattle, although it will be tough, Associate Head Coach Mike Daugherty said.

Daugherty said having back-to-back games is difficult because you must bring a different kind of energy to the second game.

“That is a tough deal, they will have the mental edge, whoever lost this game would have had the mental edge because they think they should’ve won,” Daugherty said. “Playing two games in a row gives them the edge a little bit mentally, and that’s something we’ll have to fight.”

Molina had a big three that gave the team a late lead in the fourth quarter and forced the game to overtime, where Hristova scored the first seven points for the Cougs. Hristova said she is looking to do more throughout regulation in Sunday’s matchup.

“I feel like I didn’t really contribute a lot in the fourth quarter in such an important quarter and game, so it felt good to hit those shots in overtime,” Hristova said.

McClure had a career high 16 points and 16 rebounds against Washington on Wednesday.  She said she didn’t even know she was having that good of a night until her teammates told her how close she was to a double-double.

Going into Sunday, the Huskies need to figure out a way to keep McClure off the boards if they want to limit WSU’s second-chance points. She had eight offensive rebounds Wednesday that led to extra possessions for the Cougars.

On the other side of the court, redshirt junior forward Hannah Johnson and sophomore guard Amber Melgoza were key players for the Huskies in Wednesday’s matchup. Johnson had a double-double, racking up 13 points and 16 rebounds. Melgoza had 22 points Wednesday and the Cougars will be game planing for her come Sunday, McClure said.

“In terms of a scouting report, they are all on there because they can all shoot, they can all drive,” McClure said. “They’re a really talented team all around.”

The Cougs will be without junior guard Alexys Swedlund for the third straight game. Swedlund is shooting 30 percent from behind the three-point line this season. They have been able to overcome the games so far without her, but they miss her ability to open the floor offensively, Molina said.

“We can all shoot on the team, but she is definitely our sharp shooter,” Molina said. “It opened up lanes for me when she was on the court, so now I really have to make my own plays and attack to get everybody else involved too.”

Tipoff for WSU versus UW is set for 1 p.m. Sunday at Alaska Airlines Arena in Seattle. The game can also be seen live on Pac-12 Networks.