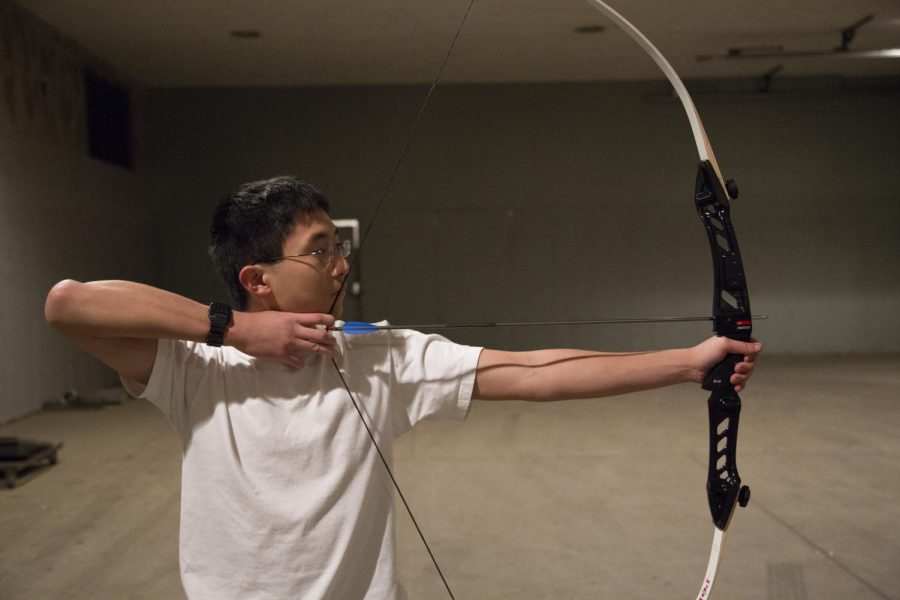 One of the only weaponry clubs on WSU’s campus, the Archery Club, has a shooting range in the basement of the Stephenson Complex.

Tyler Chu, club president and a junior material science major, is a certified archery coach and a two-time state archery champion in Washington in 2013 and 2014.

Chu was initially inspired by the “Lord of the Rings” movies and made his first bow and arrow out of sticks and supplies around the house when he was 5-years-old, he said. At age 12, Chu joined the Junior Olympic Archery Development and has practiced archery ever since.

When Chu arrived at WSU as a freshman he noticed the university didn’t have an archery range. He  decided then he would create his own space to shoot. This marked the beginnings of Archery Club.

One of the largest issues faced by the club while trying to obtain official university recognition was appealing to the WSU Senate and safety committee, Cerrillo said. The university was hesitant at first because of the potential risks involving a weapons club, but after Chu presented all of his personal credentials, plans and statistics, the club was able to receive approval from the university, Cerrillo said.

“It’s easy to see when you talk to Tyler how passionate he is about archery,” Cerrillo said. “I think he sees how important it is to him personally and what it can create for others.”

Chu’s passion for archery has helped him overcome obstacles like the WSU safety committee and the club’s financial expenses.

The Archery Club petitioned ASWSU for funding, but the club was given just enough to either buy target practice supplies or shooting equipment, Chu said. When faced with this ultimatum, Chu took it upon himself to obtain the bows, arrows and safety equipment on his own dime and use the funding from ASWSU to purchase targets, he said.

The club currently has about 50 members on their CougSync page and is continuing to grow, Chu said. Eventually, the club would like to establish their skills enough to participate in state tournaments or other competitions, Chu said.

Chu also mentioned how enjoyable coaching the club is.

“My favorite part about coaching is being able to see people enjoy archery as much as I do,” he said.