Life at Sea: Navigating friendships while on a real ship 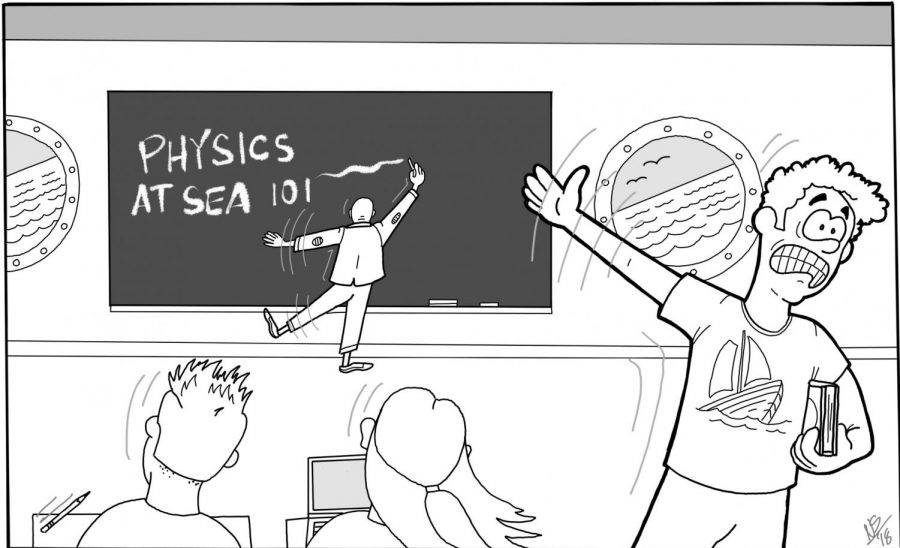 For students prone to seasickness or excessive clumsiness, living with sea legs is an everyday struggle as they navigate the MS Deutschland.

Living aboard a ship for four months can prove quite a jarring experience when compared to life on land. Semester at Sea, the study abroad program run by Colorado State University, is currently ferrying over five hundred students around the world on the 575-foot-long MV World Odyssey, also known as the MS Deutschland.

As some may suspect, things get a little cramped on a ship. There is no wasted space, but what the ship lacks in spaciousness is made up in décor. The vessel doubles as a German cruise ship in the summer, so it is outfitted with a large theatre, fine dining halls, multiple bar areas, an outdoor and indoor pool and a movie theater.

The beautiful thing about living on a ship traveling across the Pacific Ocean is everyone’s inability to use their phones. Out in the middle of the ocean, the lack of cell towers make it so every phone on the ship is pretty much an expensive notepad.

There are few ways to communicate with others on the ship: use the painfully slow “seamail” (email), call the landline phone inside their room, or leave sticky notes on doors.

At first, this sounds like an awful experience, until you realize the situation it creates. You are inclined to build friendships with everyone.

No one can text their friend group to see if they want to get something to eat. You have to just go and find someone to sit with, which is a lot easier to do when you have an entire ship of friends to choose from.

The friendships made aboard the ship seem different than those on land. It may be due to a shared experience, the lack of phones or the close quarters, but it appears anyone can walk up to someone else on the ship and become friends.

The level of inclusion aboard the ship is unparalleled. Students often walk up to a table almost filled with others they don’t know and ask to fill the empty seat. Interactions like this are what help fuel the meaningful relationships the students experience aboard the ship.

One thing some voyagers may not have realized is that the ship moves quite a bit. Some nights we experience 10-foot swells which rock everyone and everything inside the ship.

On days that are particularly rough, it is not uncommon to hear the occasional clank of someone walking into a wall. Laptops and other expensive items are stowed low to the ground so if they fall they don’t have far to go. You may see a random water bottle rolling down the hallway and someone running after it.

Some students hate it, and others love it.

Those who get seasick easily or are naturally clumsy individuals have it rough.

Those who enjoy the soothing rocking as they drift to sleep, laughing at the commotion after a large swell, find joy in the turbulent seas.