Moving in to a chapter house? Here’s what to expect:

Despite popular belief, Greek members cannot be rowdy all the time 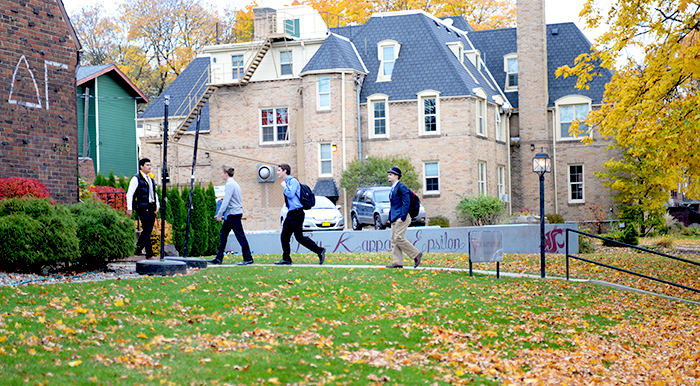 Living in your chapter house can be cheaper than living in the dorms and all your friends are around.

Many prospective Cougs are naturally drawn to Greek Row, either because of the stories they’ve heard from their parents about their time in a fraternity or sorority, or because their parents told them not to go there.

Either way, many students are intrigued by Greek life, so it’s important people know the ins and outs of moving into a chapter house.

Sophomore English major Ben Andrews has learned how to make moving in a breeze, being a senior member of his fraternity.

“First thing I’d do,” he said, “is to make sure the bed is in first, because if you save that for last you’re going to mess everything else up. After that, you can put your TV and gaming consoles in, then your clothes. Just make sure all the big stuff is in first.”

Not only is it important to unload all your large items first, but not over-packing is a major key to a successful move in.  Andrews’ advice for packing is to only bring things you use every day.

“At first, it’s kind of weird only having this space as your own, but you get used to it after a while,” he said. “It’s kind of like why people like tiny houses when you think about it.”

One misconception about Greek life is that there are no rules. This is certainly false. Andrews and his fraternity brother, junior management information systems major Ugo Nnadi, said you can have basically anything you want in your chapter house except for a few prohibited items.

Weapons and illegally obtained prescription drugs are pieces of contraband pretty widely banned in the community as a risk management policy.

Another common misconception is that Greeks are always getting rowdy. Like in the dorms, you can’t be wild and loud all the time.

“Drums and instruments aren’t really okay in houses because you have to be considerate of your housemates,” Andrews said.

Living in a Greek house is not only is cheaper than a dorm, but it can be a lot more fun, Andrews said. Even when he moved in as a 19-year-old and got the smallest room in his house, he felt it was worth it.

“I’ve had more fun living in than I have anywhere else,” Andrews said. “Living with all your brothers, you just have so much stuff to do and there’s always something going on. You’re always happy because it’s a good time.”