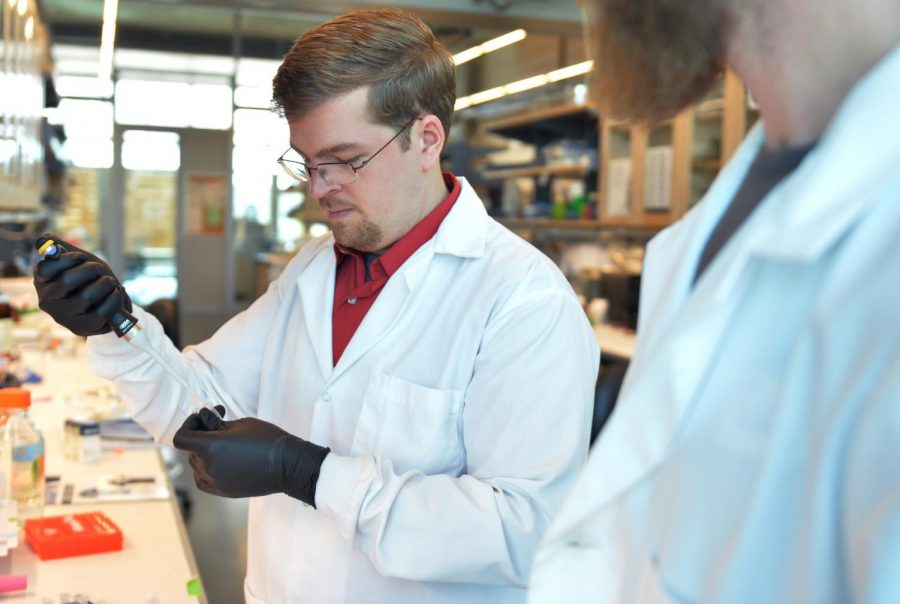 After his dad was diagnosed with cancer in 2008, WSU doctoral graduate Kevin Gray set out to alleviate the symptoms of chemotherapy. Gray, co-founder of Chimeric Designs Inc. and a chemical engineer, has since created a team of scientists to reduce post-treatment effects on cancer patients.

Gray said 20 percent of cancer patients die from the treatment, not from cancer itself. Solving this problem is the focus of their project.

Research associate Alex Jonson said the team’s goal is to take an antibody that targets cancer and attach chemotherapy drugs to it.

Chemotherapy is a complex process, involving many industries. Creating the antibody is one, and making the drug is another, with a whole industry dedicated to linking the two. This is where Chimeric Designs comes in.

They hope to create an efficient antibody-drug conjugate, or an ADC, that binds chemo drugs to antibodies, which can directly target cancer cells — something current chemotherapy drugs cannot do.

“They’ve shown they can do it,” said Joe Harding, a professor in the Department of Integrative Physiology and Neuroscience.

The antibody takes the drug directly to the tumor and kills it, Harding said. He provides Chimeric Designs with lab space on campus and acts as a mentor for the team.

Gray and co-founder Afshin Kahn, who has a doctorate in astrobiology, want to produce a product to sell, not just conduct research on a topic.

“We want to build a technique and license it,” Gray said, “then sell that to other biotech companies.”

It is very expensive to perform trials on a product, and Gray said Chimeric Designs does not have the capacity or the funds to put its product through trials.

“Our fellow citizens pay for this research,” Harding said. “They should get the benefit of it.”

Chimeric Designs was created with a grant from WSU National Science Foundation’s Innovation Corps. The company has received funding from the Carson College of Business, with large portions from WSU Commercialization Gap Fund, and the Washington Research Foundation.