Swimming will celebrate three senior athletes at meet this weekend 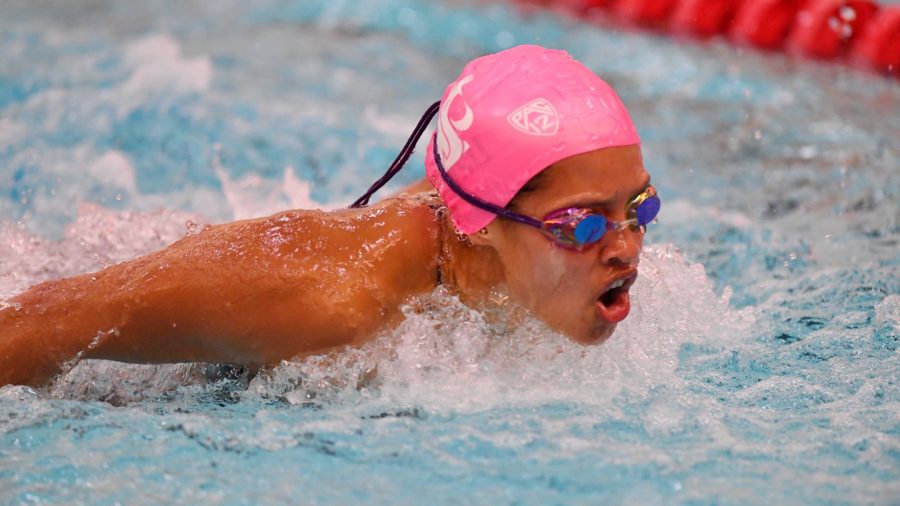 Senior breaststroke and butterfly swimmer Anna Brolin pushes her way through the water during a swim meet.

WSU Swimming will have its last home meet of the season this week when they face Oregon State University. It will also be senior night for the team, as senior swimmers Anna Brolin, Rachel Thompson and Talisa Wibmer will compete for the last time in Pullman.

Head Coach Tom Jager spoke about the three seniors departing at the end of this season.

“I’m looking forward to our seniors having a good swim. These guys have been going hard for Washington State for four years,” Jager said. “Their parents can come and we can celebrate them. Anna, Talisa and Rachel have just been great seniors, and they’re finishing what they started and I’m proud of that.”

Coach Jager said the Beavers have good backstrokers and breaststrokers, but he believes WSU has a slight advantage heading into the meet. He also said WSU has beat teams they weren’t expecting to and anyone can win on any given day.

After competing against OSU, the Cougars’ last meet of the season will be against University of Utah on Feb. 10 in Salt Lake City. Once the season is complete, the team will travel across the state to Federal Way to compete in the Pac-12 Swimming and Diving Championships.

“[We’re trying] to have a great championship meet, get some kids to qualify for NCAA’s, so all of our training focus is on conference and then we have these tests along the way to see where we’re at,” Jager said. “We had some good things, some really cool stuff that stood out to the coach’s eye at Arizona State. We’re doing some good stuff.”

WSU faces the Beavers at 5 p.m. Friday in Gibb Pool.

“These kids have a lot of pent up energy,” Jager said. “There’s been a lot of things going around on campus. And so they find themselves in the pool.”