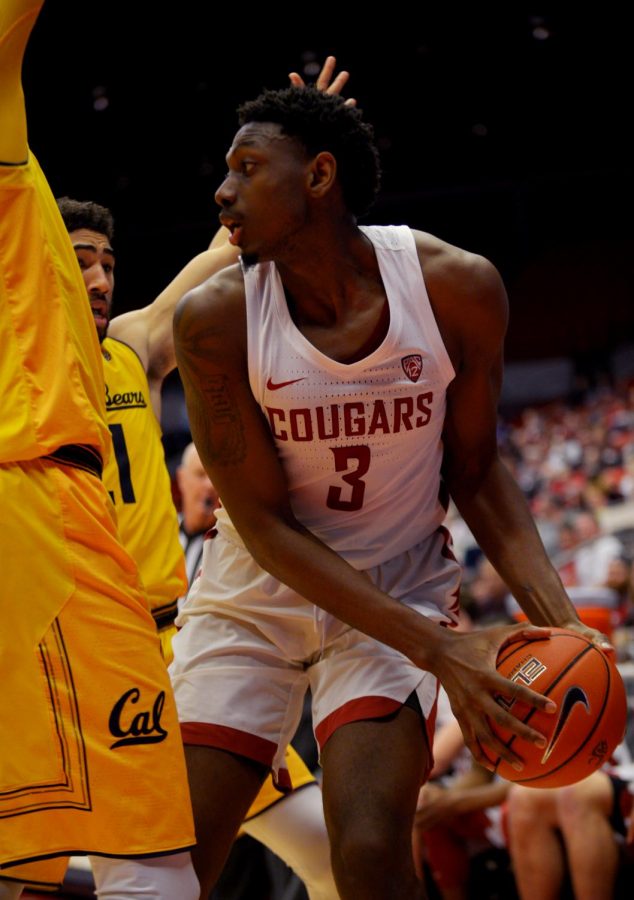 Junior forward Robert Franks looks for an open in a game against Cal on Jan. 13 at Beasley Coliseum.

WSU men’s basketball will face University of Washington on Sunday for the second time this season, looking for revenge.

Junior forward Robert Franks said the team got complacent and had a lot of mental lapses late that cost them the game.

“We were up ten and got comfortable,” Franks said. “They stayed in attack mode and we lost, we have to play a full 40-minute game on Sunday.”

Getting stops on the defensive end against UW will be WSU’s main focus going into the rematch, junior guard Viont’e Daniels said.

The Huskies shot 73.9 percent from the field in the second half of the first matchup. WSU only forced UW to take one three-pointer in the second half and turned the ball over 23 times in the game, leading to a lot of easy shots for the Huskies, Daniels said.

“We need to cut down on the turnovers,” Daniels said. “Stopping their drives for easy lay-ups and boxing out to get rebounds will kick-start our offense.”

Franks also said slowing down the Huskies offense will be a key part of their gameplan. He said they cannot expect to win games without getting stops, so they need to get three or four stops in a row and really lockdown defensively.

UW freshman guard Jaylen Nowell and WSU sophomore guard Malachi Flynn will be two players to keep an eye on. Nowell made seven of his 13 attempted shots and tallied 15 points in the first game between the two schools.

Flynn only made one of his nine shots from the field and scored a bleak five points in the first matchup. He said he needs to perform better this game and contain Nowell defensively.

“They are really balanced in their scoring, but he is their go to guy at the end of shot clocks or the end of the game, so we need to shut him down,” Flynn said.

Flynn also said his low scoring performance last time out was not due to the Huskies defense, but he really wants to see those shots go in on Sunday.

Flynn said the history of this cross state matchup makes the atmosphere more intense than any other game. He said the Cougs want to win this rivalry game even more than they normally do because they lost the first matchup in Pullman.

Going to Seattle does make it special for a lot of the WSU players, Franks said. The Seattle area was home to many of these players before coming to Pullman, so they get to play in front of a lot of family and friends when they return to face their rival.

Daniels said this rivalry always brings out the best in both sides and they must contain their energy and excitement coming in to the game.

“We don’t like them and they don’t like us, we have to be tough and get our payback,” Daniels said.

Tipoff is set for 5 p.m. Sunday at Alaska Airlines Arena in Seattle. The game can also be seen live on ESPNU.