Life at Sea: Learning to love lightning on stormy ocean 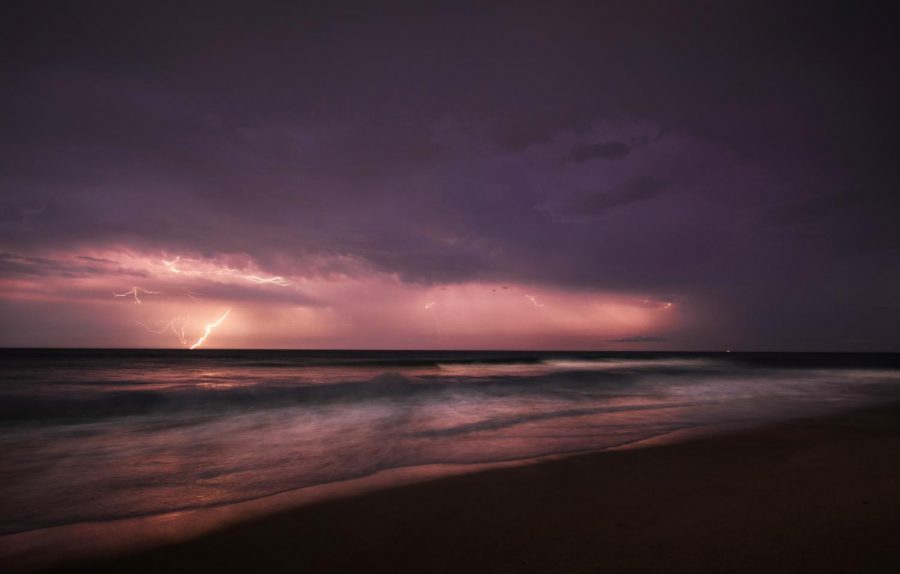 While heavy rainfall may deter some, others see it as an opportunity to capture a dazzling moment.

Good evening voyagers. This is your captain speaking. I would like to inform you that we will be seeing swells larger than we have ever experienced. But do not be alarmed. You are always safe. Remember, one hand for yourself, and one for the ship.” Lovely.

I remember watching shows about deep sea fishermen and every now and then they’d get caught in a storm. I always thought the severity of the storm was over-dramatized. On January 18, the ocean showed me just how wrong I was.

I had just finished eating dinner at the Berlin Restaurant on deck 6 with my roommate Scott, his cousin Paige and her roommate Maddie. The ship had been rolling with the large swells all day. I nearly had to step out of a few of my classes because I was afraid of ruining the expensive carpet.

We decided to go to the bow (front) of the ship on deck 9, the uppermost deck, to catch some air and see the infinite darkness of the night sky. The ship has no need for forward facing lights since it is outfitted with radar. Because of this we are only able to see the 5 feet of water surrounding the ship’s hull, illuminated by the light shining through various portholes.

When we made it to deck 9, we were surprised to see a large crowed had formed on the deck, with everyone looking straight ahead. Natural human curiosity took hold and the four of us followed suit. It didn’t take long for us to see the lightning.

A bright flash of lightning struck out in the distance, and for a brief moment we could see the turbulent seas we were caught in. A few moments later, another flash of light. And then another, and another. With each flash of lightning the dark blue swells seemed to become larger and rougher. Just then I felt the first drop of rain graze my face.

“I’m going to get my camera,” I said to my friends as I was already running across the deck to get to my cabin on deck 4. I scrambled to get as much gear as I could while trying to avoid slamming into a wall because of the swells. Out loud I recited, “Camera, rain cover, tripod, jacket.” Then I took off again.

Once back on deck 9 with the rest of the crowd I mounted my camera on the tripod and slipped the rain cover over. Right on cue, the rain came down.

I knew my rain cover was sufficiently tightened, but the sheer amount of water being dumped on my gear and myself had me nervous. I hadn’t noticed, but the crowd of students watching the lighting had scattered inside and only a few remained outside in the downpour.

While I was focused on capturing the lighting on camera a group of a dozen or so students, most of whom were shirtless and only wearing soaking shorts, were running around the deck like this was the first time they had ever experienced rain.

“You call this a storm?!” someone exclaimed. The group of students had now started to play a game of tag while slipping and sliding in puddles of water.

All the while another photographer and videographer, Stephanie, had been filming these students’ antics. I was struggling to photograph the lightning, which was not a surprise, so I turned around and began to enjoy the madness that ensued. Eventually, crew members came up and told us it was too windy to be up on the bow and escorted everyone inside. Once inside, I could still hear the thunder of the rain and feel the power of the swells; but I no longer feared any of it.

In fact, the sound and feeling made me excited. Each day now, I crave to hear over the intercom, “Good evening voyagers. This is your captain speaking.”