Following cheese from cow to curd 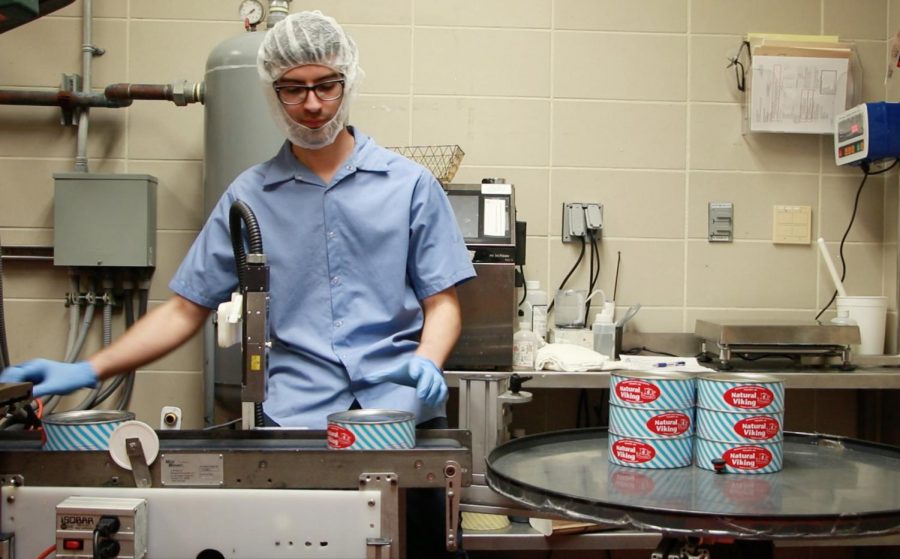 A student employee positions cheese cans properly as they come off the conveyor belt so that the date of canning prints correctly on the designated spot on the lid.

Aromas of cheese and dill mix with the scents of sanitizer and cow manure. Located on Ferdinand’s Lane, down the road from the stadium, students operate shiny silver equipment to make cheese at WSU Creamery.

As the sun rises and quietness fills the crisp morning air, cheese production starts early as a truck delivers 1,600 gallons of fresh milk from Knott Dairy farm to Ferdinand’s every morning.

The first step in the eight- to nine-hour process of making cheese is pasteurization. The 15,000 pounds of milk are pasteurized in big metal containers.

After the milk has been heated, student workers add lactic bacteria, a healthy bacteria that turns sugars into lactic acid. Large agitators slowly turn the milk as enzymes are added to thicken the milk to a pudding-like consistency. The stiffened cheese is then cut into small bits called curds.

The curds are cooked and stirred to remove whey, which is the leftover liquid not used. Yager said Ferdinand’s is working on expanding so they can process whey back into animal feed.

Student workers then add Ferdinand’s secret ingredient, a bacteria that has been alive for 60 years which gives Cougar Gold its sharp yet smooth flavor.
Yager said there are about 30 students on the production floor, a majority of which are food science majors who work anywhere from two to four hour shifts. Ferdinand’s gives a portion of their proceeds to the School of Food Science.

The cheese then moves to a large trough-like structure called the finishing table for the last couple of steps, where it is salted to prevent it from liquefying. At this point, spices and flavorings are added for specialty cheeses, like Ferdinand’s Viking series.

Every Friday Ferdinand’s makes their Viking flavors including Viking, Dill and Garlic, and Crimson Fire. The rest of the week is dedicated to making Cougar Gold. In the spring, summer, and early fall, Wednesdays are for making ice cream. However, in winter, Yager said ice cream is made every two or three weeks.
Once salt and flavors have been added, the cheese curds are shoveled into cylindrical holders called hoops, moving to the cheese press phase. Carts full of hoops squeeze any remaining liquid straight onto the tile floor of the production room, later to be hosed away. Cougar Gold is pressed overnight, giving it its crumbly texture. The Viking flavors are pressed for a couple hours.

After pressing, the cheese is removed from the hoop and taken to the cutting station. Each loaf makes nine cans of cheese with 90 loaves per batch and six batches a week.

The cheese loaves are hand-cut into can-sized wheels and placed into Ferdinand’s famous cheese tins, which have been around since the 1940s. Then lids are sealed and the cans are stored. For three days the tins are kept in a cold room to make sure the lid has properly sealed. If it hasn’t, air will get into the can and make the lid bubble, like jar lids that pop when opened.

Yager explained how cans that pass the seal test are stored and aged at Ferdinand’s annex. Cougar Gold is aged for a year, and Viking cheeses are aged for two months. After the cheese has aged, it makes its way into the hands of customers both near and far, as online sales make up the majority of Ferdinand’s total sales.
Over this last winter break Ferdinand’s sold out of Cougar Gold three weeks earlier than previous years.

WSU Creamery management is hoping to expand their production to meet the demand for cheese. The proposal should be completed in the next few days and presented to the CAHNRS budget board. The proposal asks to rearrange existing equipment as well as purchase new whey processing equipment. The expansion could increase production by 80 percent, which is over 400,000 cans of cheese compared to the 250,000 cans currently produced each year.