Importance of building community, friendship through games should not be understated 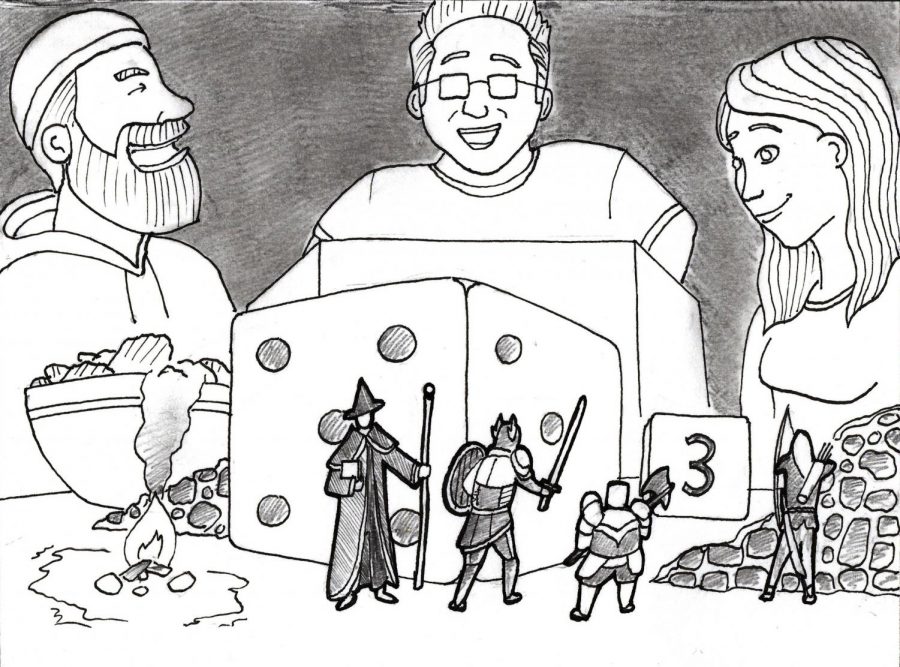 Dungeons and Dragons is one of many role-playing games students can utilize for bonding, comradarie.

Storytelling is the surest way to connect with one another. By telling a story, you invite someone else to hear and understand the way you see the world.

Deeper than that, however, is the act of collaborative storytelling unique to role-playing games like Dungeons & Dragons. These games are powerful tools that can unite people around common goals and create meaningful connections.

For people who have no experience with role-playing games, trying something so new and complex might feel overwhelming. But from my perspective, the sense of unity and teamwork that is built during a game lets people jump in quickly, helping each other along the way.

Since the 1970s, D&D has been helping people create adventures, worlds and memories unlike any other, all without the need for a computer screen or game controller. What makes D&D special is that creativity, collaboration and storytelling are required to create an adventure. The experience is entirely based on what the players decide to do.

“Role-playing games allow you to make a creative story, and, I think, something that personally belongs to only the six people in the room,” said Jacob Mallery, president of the WSU Tabletop Gaming Association. “There’s a real community that comes out of playing role-playing games.”

During a typical game, one player acts as the Dungeon Master while the others control characters in the story. The role of the DM is to create the narrative other players will explore.

Of course, one can experience a magnificent story in a variety of mediums. Great books, shows and movies can all draw people into narratives and make them feel real emotions for fictional characters. But only D&D and other role-playing games can let a person be a part of one of those great stories.

Participating in a role-playing game gives players a chance to explore the perspectives of people different from themselves, and to imagine how their character might act in the face of various obstacles. Doing this makes players consider how they might act in the same situations, a feeling that can’t truly be replicated by any other medium.

“I think they have a huge social benefit: You have an opportunity to collaborate with up to six other people on building another world,” Mallery said. “It’s a great form of collaborative storytelling and it’s not really something we do often.”

Beyond D&D, there is a whole host of other games that fill different roles and allow different narratives to take place. Notable among them are games that take place in pre-established worlds like the “Star Wars” universe or Middle Earth from “Lord of the Rings.”

“What I found was an amazing diversity in the kind of games you could play,” Mallery said. “Some were mystery-based, some were action based. Others had large, sprawling narratives, while some were very basic.”

This great diversity in ways to play means there are games for everyone. Not only is there a great deal of variety in possible adventures, but the materials to create those adventures are very accessible. With D&D, most of the resources for playing are already online.

For anyone who wants to use their imagination for something beautiful and unique, D&D has a place for you. In a campaign I played, members of our party became heroes written into the folklore of the world, champions of various deities. My character, a man made of metal, became king of a nation of nomads.

As screenwriter Randall Wallace said, “storytelling is the greatest activity of any culture. Storytelling is how you build a family, how you pass along identity.”

With so many problems today tearing us away from one another, these small rituals of connection have never been more important. D&D can’t heal all the wounds, but it can help us remember that we are all on the same side, characters in the same human story.