Musicians’ careers enhanced by Battle of the Bands

Winner has chance to open for three bands at Springfest 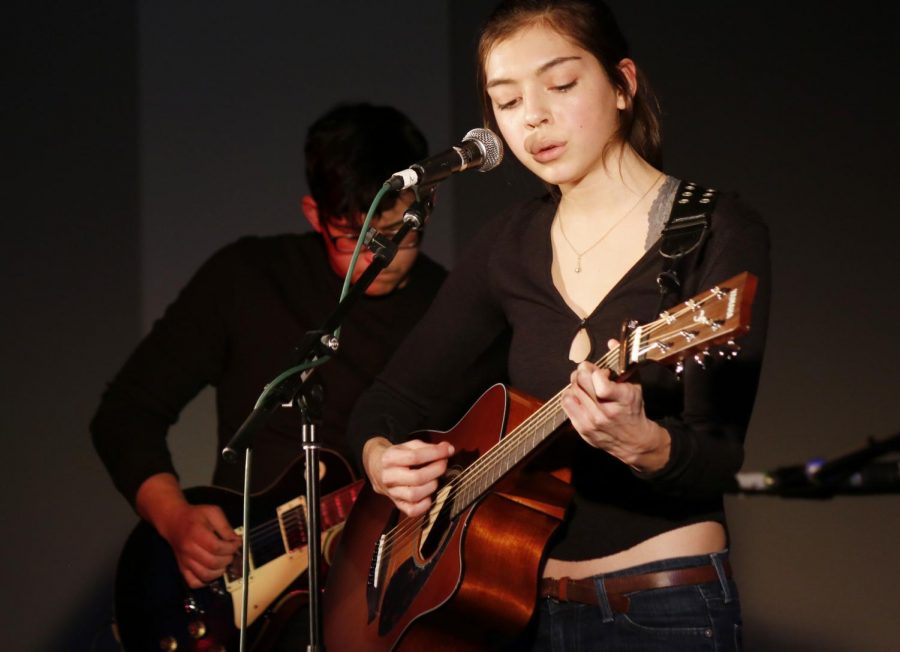 “Shyam and the Explosives” band members Claire Jacob and James Reyes play an original song in the Battle of the Bands event Tuesday night in the CUB.

Setup commences with the crash of a cymbal vibrating from the CUB Senior Ballroom. The buzz around the room might be from the audience’s excited conversation, or maybe it’s just the electric hum from the amps and microphones on stage.

One guy rumbles his nerves into the bass pedals under his feet, while another plucks silent notes from his black bass guitar.

WSU’s Battle of the Bands is a chance to showcase local talent, but the purpose goes beyond that. The winner, chosen by vote and a panel of judges, gets to open for three different bands at this year’s Springfest. That’s a veritable career-enhancer for any one of the bands spread throughout the room.

Stretched out at a table in the darkened corner is four-man band Comb Threats, joking and handing out information strips from the teeth of a paper comb. Drummer Keenan Wright taps out a rhythm on his thighs as he talks.

“This’ll be nice, because normally our crowd is drunk people,” he says, “but now we’ll get some publicity.”

Despite Wright’s constant jittering, the band is about as relaxed as can be. When Wright describes the band’s genre as “melodic technical speed thrash core,” bassist Nathan D. adds his own, “Slash hair metal!”

The group laughs at the inside joke. Onstage, Stealing Spoons rolls through a sound check, listening to the air and motioning to sound techs on the ground to turn up one dial or another. When they launch into their first song, the sound is immediately infectious: The power chords are enough to buckle kneecaps.

At the end of an all-too-short set — three songs, 20 minutes — the band departs to audience applause and a “yeah, Spoons!” from Comb Threat in the back corner. Once outside, Stealing Spoons starts to pack up over the strains of the next sound check.

“This has been our first show in a while,” guitarist and vocalist Brandon Schafer says. “I just got back from Australia.”

The guys continue to pack up while the next act starts on a second stage. Seattle singer-songwriter Steven Curtis works miracles with a looper pedal, backing his melodies with flat-palm guitar drumbeats and his own vocals on harmony. High, bright guitar strains stream over the audience to highlight Curtis’ mellow voice as he sings: “Josie, where are you now?”

He leaves the room with a softened vibe, which is quickly shattered by none other than Comb Threat. They’re hyped, they’re loud and they’re obviously just as comfortable on stage as they were in the corner. Guitarist and vocalist James Mitalas repeatedly sends up a cheer: “Comb THREAT!” which is echoed by his band members and, later, students scattered in the crowd.

When they start, the energy level is pumped straight past 11 and on to a 12 or 13. Wright loses his shirt after the first song, and his hi-hat wobbles with each slamming hit, reflecting the red glow from the lights. Comb Threat milks the final chord for all it’s worth, vamping on every instrument until ending with a final punch.

Shyam and the Explosives then come together on stage two, kicking off a smooth groove punctuated by a little nervous eye contact.

“This is our first performance as a band,” drummer Shyam Gopal had mentioned earlier as Curtis tuned up. “We knew each other before, but we haven’t performed together until now.”

Spokane rapper Jango — “Just Jango,” he clarifies later, once his set is finished — heats up the stage next, dancing as if the thumping bass track is trapped in his white sneakers. Jango is no stranger to WSU, having opened for Aminé at Cougfest 2017 and serving as the opener for MadeinTYO this weekend.

Jango has more than Springfest on the mind as he rattles out lyrics against a backing track.

“I’m really focused on the upper-left region,” he says outside the ballroom. “We don’t have too many local artists on the East Side. We’re overlooked, you know what I’m saying?”

Tri-Cities-based band Los Caipirinhos certainly leaves no opportunity to be overlooked as they close out the night with an explosive, high-octane set. Per their urging, a few students get up in front of the stage and dance to the band’s combination of traditional rock instruments and Latin brass. Perhaps too shy, the rest remain seated.

“The crowds like this can be intimidating,” frontman Ramiro Panduro says afterward, as the crew helps to break down the stage.

“Yeah,” Panduro says, “but even if they don’t get up and dance, you can still see them reacting to the music.”

Those reactions, it seems, were positive. The night ends with students filing out to cast their votes, to be included in part with the panel of judges in determining this year’s Battle of the Bands winner. Friends discuss among themselves the best of the acts, sizing each band up against the others.

Then, ears ringing, the group disperses, leaving the sound techs to roll up instrument cables under the red glow of the ballroom lighting.