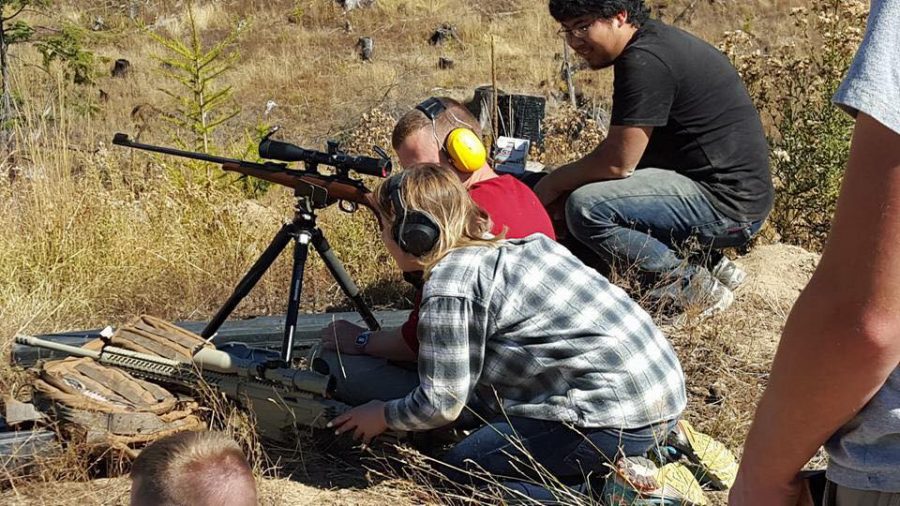 Growing up on a farm, Pruitt has been exposed to and influenced by the use of firearms since a very young age, he said.

“It’s important to me because I feel like a gun is my right to self-defense,” Pruitt said.

The Gun Club emphasizes creating a safe and politically neutral environment for WSU students who want to shoot recreationally or competitively, according to their Facebook page.

The club congregates for meetings once a month and hosts off-campus shooting events twice a month, Pruitt said. The two events are two weeks apart in order to appeal to everyone’s schedule and ensure that members can make it to at least one shoot a month.

The two off-campus events are usually a shotgun, pistol or rifle shoot. For the shotgun shoots the Gun Club goes to a range in Colton where shotguns are available to use for free, Pruitt said.

For the pistol and rifle shoots the club heads to the Idaho National Forest and some members volunteer their guns for others to use. The club includes range-certified participants who help instruct less experienced members and maintain the overall safety of the club, Pruitt said.

Pruitt said it doesn’t matter if someone has never touched a gun before or is an expert — the Gun Club encourages anyone with an interest in firearms to come participate in one of the monthly events or meetings.

“When I see other students talk about [guns] and they may not understand them, that’s where I want to come in and help educate them and bridge that gap,” Pruitt said.

The club recently purchased a dueling tree and ordered rubber dummies for their rifle and pistol shoots. It is more effective to use dummies than clay pigeons to teach someone to shoot because they can see where they hit the target, Pruitt said.

Friendship and getting to meet different people that share the same interest are Pruitt’s favorite part of being a member of the Gun Club, he said. Club President Max Hibbert emphasized anyone with an interest in learning about guns is more than welcome to come to meetings.

The Gun Club does not yet have a set date or time for their monthly meetings, but the officers are currently working on organizing one, Pruitt said. An efficient way to keep up to date with the club is to join the Facebook page and keep an eye out for announcements.

The Gun Club currently has over 300 members on their Facebook page.