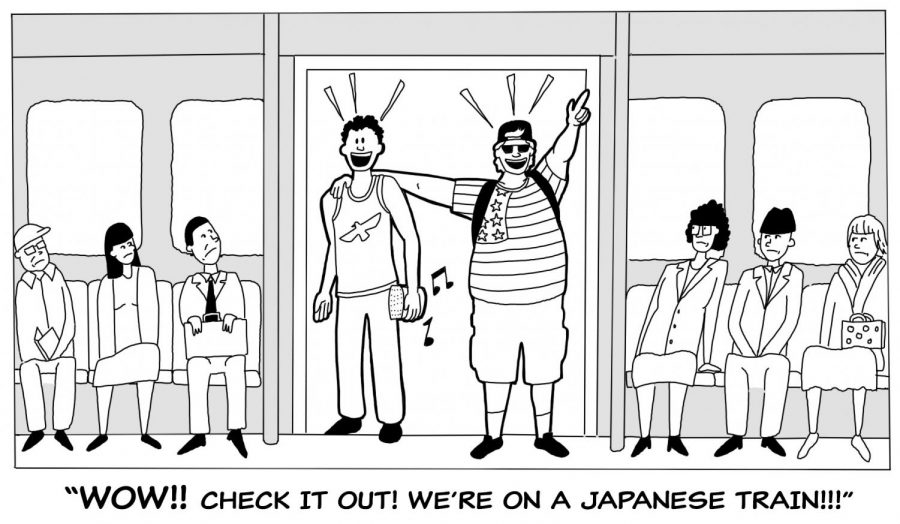 As they travelled using Japan’s transit, North American students became aware of how loud they can be in public places.

All public transit in Japan is meant to be silent.

You get in quietly, sit down quietly, wait quietly, get up quietly and leave quietly. That is just the way it is done in Japan, especially when it is rush hour in the subways and hundreds of individuals pack into these tin tubes like sardines.

If everyone decided to carry on full volume conversations, you would never be able to hear much more than your own thoughts, let alone the station announcements.

This trend of silence would have persisted if my group of North American students hadn’t arrived.

I’d never been so self-conscious about every little noise I made. Typical North American culture is to converse with your friends when in a public setting. Sometimes this can be loud or quiet, depending on the location.

As I sat there on the bullet train going to Hakata, a ward of the city Fukuoka in Japan, I had a local Japanese woman sitting to my left and my American friend to my right. The Japanese woman was sitting very compactly, letting me use the armrest dividing us. She was dressed in plain black pants, a tan coat and a medical face mask.

She drifted from reading her small book to sleeping, all the while remaining in the same position for hours, only moving to shift weight or cross her legs. She didn’t even speak when I asked if I could use the outlet next to her, she just smiled through her medical face mask, nodded her head in affirmation and moved her belongings so I could get to the outlet.

My American friend sits with legs extended to relax her knees, foot tapping along with the beat of her music in her headphones, shifting around, making chitchat with myself and our two other friends sitting behind us.

By no means is she talking at an unreasonable volume, given the space, but when compared to the otherwise silent train it feels like she is shouting. Each chuckle, each syllable makes me cringe.

My first Japanese public transit experience came in the form of a train to Akihabara. The 10 of us carried on our conversations at a low volume and occasionally shushed each other when we felt we were too loud. One friend, Brent, silently put his finger up to each of us telling us to stop talking.

One by one we fell silent, and so did the train. We stood there in amazement. Brent, then wide-eyed and awestruck, mouthed, “Literally hundreds of people on this train and we are the 10 making any noise.”

As I listened to the hum of the train engine and the screeching of the brakes I was suddenly very aware of the noise pollution we had been creating.

Hundreds of people stretched out between numerous cars and not a peep from a single one of them. We all just stood there silently like we were supposed to and waited for our stop.