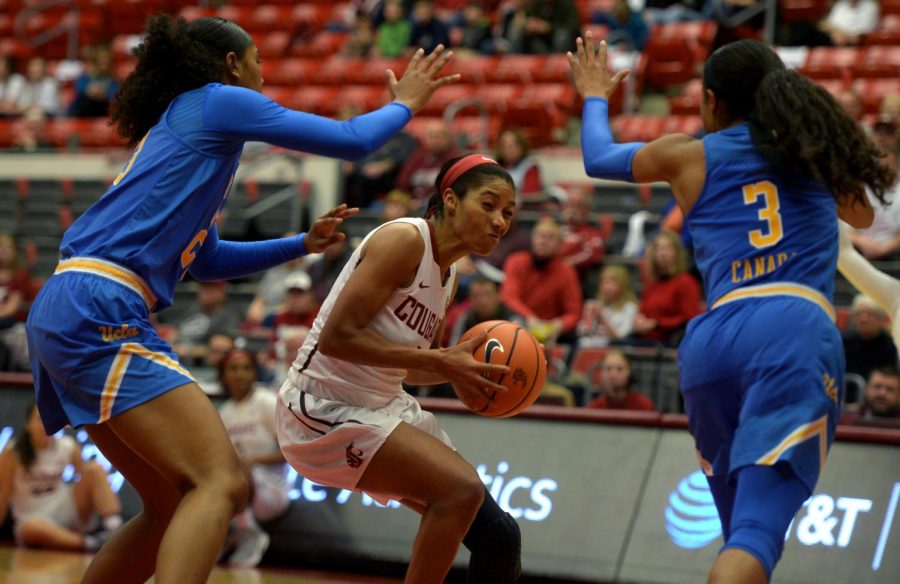 WSU senior guard Caila Hailey fight her way through two UCLA defenders in a game on Jan. 28 at Beasley Coliseum.

WSU women’s basketball lost to Arizona State University 77-51 in Tempe on Sunday after ASU outscored the Cougs 49-30 in the second half.

The Cougs shot 33.9 percent from the field while the Sun Devils knocked down half of their attempted shots.

The game was close in the first half when the Cougs were down 22-21, but then WSU went on a cold spur and the Sun Devils made a 13-0 run. In that span, WSU didn’t score for over six minutes. In the second half, ASU shot 65.5 percent from the floor and made 10 of their 12 shots in the fourth quarter.

The lead changed hands nine times and was tied on three separate occasions. ASU was in front for nearly 30 minutes in the game.

This win marks the seventh consecutive time the Sun Devils have beaten the Cougars, improving their overall record to 45-18 against WSU.

The Cougars return home 6 p.m. Friday to play No. 16 Oregon State. The team will don pink uniforms in support of breast cancer awareness. The game can also been seen live on Pac-12 Networks.