Tennis goes on road for pair of matches this weekend 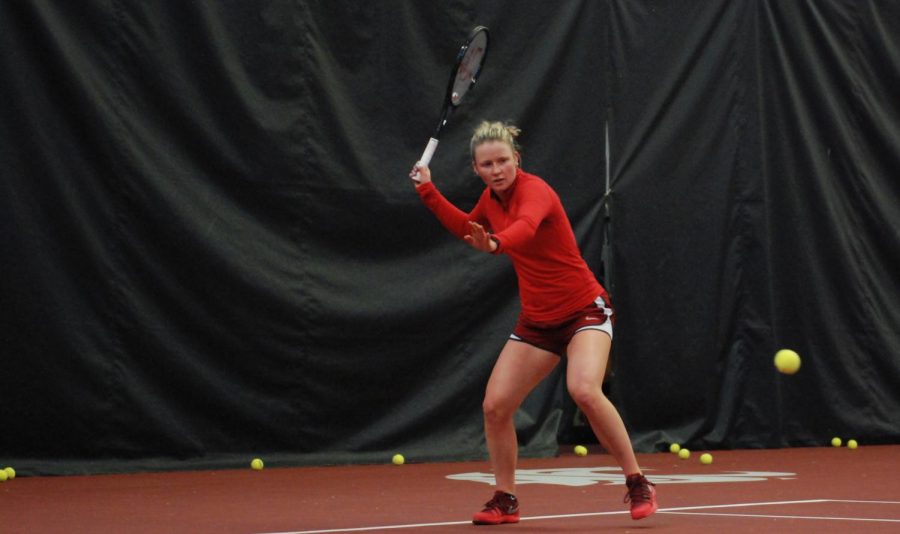 WSU tennis will put its undefeated record on the line when they head to Manhattan, Kansas, to face University of North Texas and Kansas State University this weekend.

The Cougars know they cannot overlook North Texas, a team that has only dropped one match this season, heading into Saturday. Sophomores Melisa Ates and Guzal Yusupova said the Cougs are feeling confident in where they are at, with five of their six wins this year being sweeps.

They both said this season is different than years before, has an increase in chemistry has helped them come out on top more often.

“Last year our team was really young,” Yusupova said. “Now we are stronger and more experienced as a team.”

Ates said the team is making progress, getting better every single day and continuing to improve so they can reach their long-term season goals, including making the NCAA tournament.

Head Coach Lisa Hart said she has seen improvements in every match, which has been exciting to watch.

“It is always good to win, but every day is a new day and anyone can win on any given day,” Hart said. “We need to put all our energy into North Texas and take the year one match at a time.”

Hart said North Texas will be a big test for the Cougars. The team has had close matches with the Mean Green in the past.

“We have scouting reports and know how their different players play,” Hart said. “We just try to spend time on our own preparation to keep winning matches.”

From the players’ perspectives, Yusupova said that they are prepared mentally to take on North Texas.

The Mean Green have won three of their four matches this season. They will be looking to avenge their 4-3 loss to WSU in a hard-fought match last year.

After competing against North Texas, WSU will battle Kansas State on Sunday. Hart said the Wildcats have a lot of talented young players they are unfamiliar with, which will present a challenge for the coaching staff and the players.

Kansas State edged the Cougars 4-3 last season, but WSU defeated the Wildcats 5-2 in 2016. This is the third straight year the two teams will play each other.

Hart said to reach their aspirations of making the NCAA tournament later this year, the team has to be ranked within the top 40 teams in the country.

Ates said the team is confident in their record, but it’s too early in the season to get overconfident.

“We have to be careful right now,” Ates said. “We are undefeated, but we have only played six matches. We have a lot more matches to come that will decide our season, so we need to stay focused.”

WSU will play North Texas at 1 p.m. Saturday and Kansas State at 9 a.m. Sunday in Manhattan.