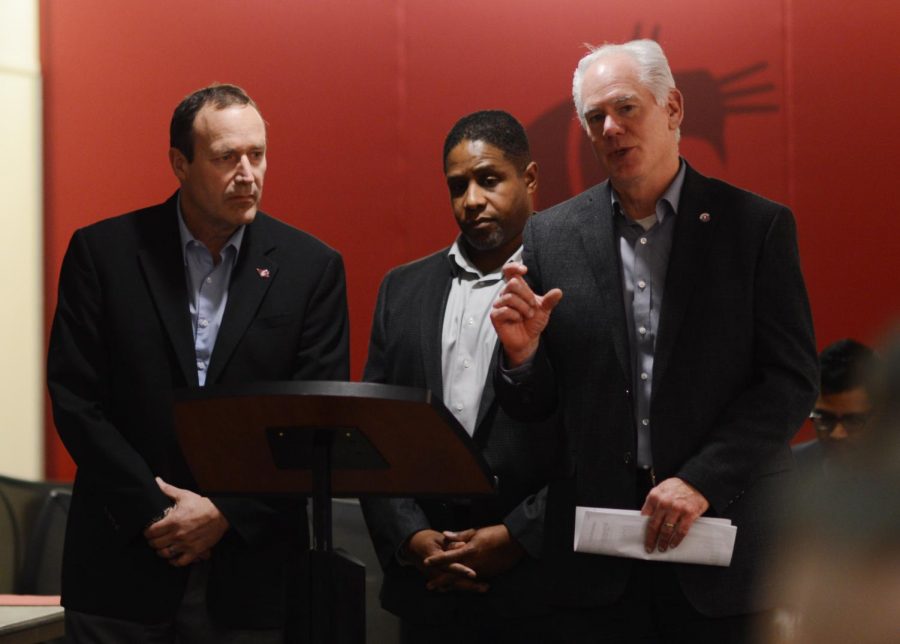 ASWSU opted to not put a referendum on the ballot that would have replaced WSU Athletic’s Services and Activities fees with a mandatory $265 annual sports pass at their meeting Wednesday.

After discussion and testimony from students and athletic officials, 11 senators were in favor of the mandatory sports pass on the ballot and eight were against. A two-thirds majority is required to put a referendum on the ballot.

The referendum would have been categorized as a mandatory fee, meaning it would be included in tuition and fee estimates that financial aid covers. According to the bill text, 11,212 students currently have sports passes which cost $239 a student. The proposal would raise the sports fee cost to $265 a year and every undergraduate student would receive one.

Transfer Delegate Jonathan Brown and All Campus Senators James Dalton and Tyler Parchem authored the bill and supported the referendum.

Sen. Parchem said voting yes for the referendum does not mean senators supported mandatory sports passes. Instead, he said, it showed their support for the student’s voice and ability to choose for themselves. He said voices would be taken away if the referendum was not put before students.

All Campus Sen. Gavin Pielow, who voted against the pass, said students already have options when it comes to their athletic fees.

“It’s not about giving the students a choice,” Sen. Pielow said, “because you know what, they already have a choice that’s called the optional sports pass.”

Sen. Dalton said consolidating the fees students pay for athletics would lower how much students pay overall. He also said the fee would create a more inclusive environment, which would bring the campus  together giving more students opportunities to go to games and participate.

“It would, by being inclusive,” Dalton said. “Even so much as a school spirit organization cost money to get into–this fee allows students to get into it regardless whether or not they have the extra money to spend and get all the extra cool gear.”

Associate Director of Athletics John Johnson, Athletics Chief Financial Officer Matt Kleffner and Assistant Director of Athletics Marty Northcroft represented their department before the Senate and said the fee would be an investment for students. They said not only would it benefit the student body , but WSU athletic student-employees as well.

The athletics representatives said ticket sales, donors and concessions have raised their prices, and they’re only asking students to contribute to that growth.

Senator Brown said those who do not participate in athletics events may be paying for something they do not use, but will benefit the majority who need it.

College of Communication Sen. Harald Hyllseth asked if other Pac-12 members require student fees like the proposed referendum. Johnson said at least eight have similar student fees. Oregon State University is one of them.

All Campus Sen. Savannah Rogers asked for a written form of reassurance that the fees will be directed to the students, and that the department will not use it for other finances.

“Supporting students is really important,” Rogers said, “but at the same time, I’m still concerned about the 5,000 students who are going to be negatively affected by the fee… can they afford this?”

Read our past coverage here.

This story has been updated from it’s original version to more accurately contextualize Senator James Dalton’s comments during the meeting.