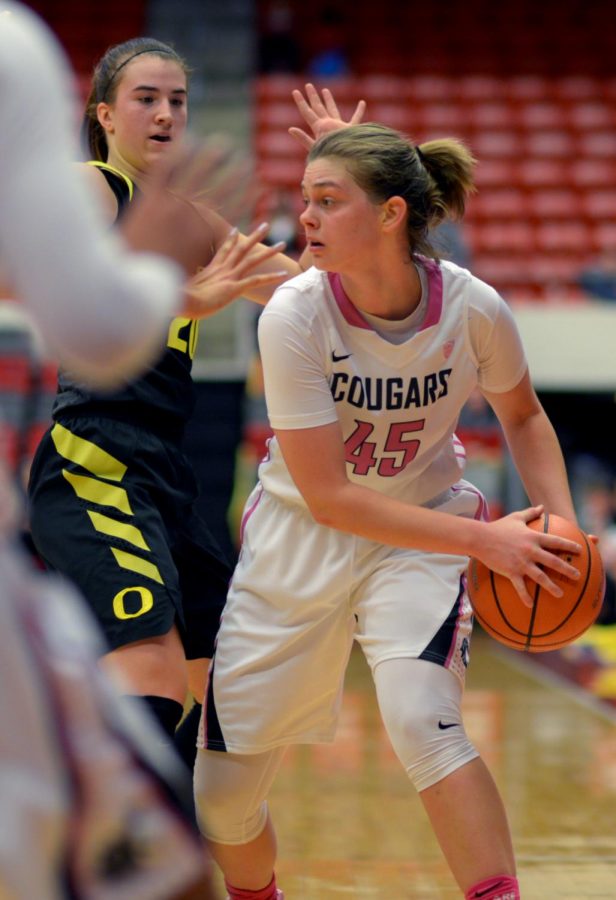 “I thought we played great this weekend given the circumstances,” Daugherty said. “Offensively, we were good all weekend.”

Ducks sophomore forward Ruthy Hebard had a record day, going 12-12 from the floor and racking up 29 points, breaking the Oregon single-game field goal percentage mark. Freshman forward Satou Sabally and sophomore guard Sabrina Ionescu contributed with 17 points each in a game dominated by the Ducks’ underclassmen.

“When [Hebard] gets the ball around the basket, she puts the ball in the hole against everybody,” Daugherty said. “She’s a great finisher and she knows what her shot is.”

To start the game, Oregon made their first seven shots. The Ducks shot 80 percent going into halftime, holding a 48-34 advantage.

A cooler shooting third quarter for UO helped WSU cut the deficit to 10 points going into the fourth quarter. The Cougars shot the ball well in the fourth, cutting the deficit to single digits on three separate occasions, but couldn’t muster up enough defensive stops in the end.

Senior guard Pinelopi Pavlopoulou said the Cougars showed they can play through adversity by fighting back in the final 20 minutes of the game.

“The fact that we battled in the second half shows improvement for us,” Pavlopoulou said.

WSU redshirt sophomore forward Borislava Hristova continued her breakout season, leading the Cougars with 22 points on 50 percent shooting from the field. She led the team in scoring for the 20th time this season.

The Cougars return to the court 6 p.m. Friday for a game against University of Utah at Jon M. Huntsman Center in Salt Lake City. The game can also be seen live on the Pac-12 Networks.