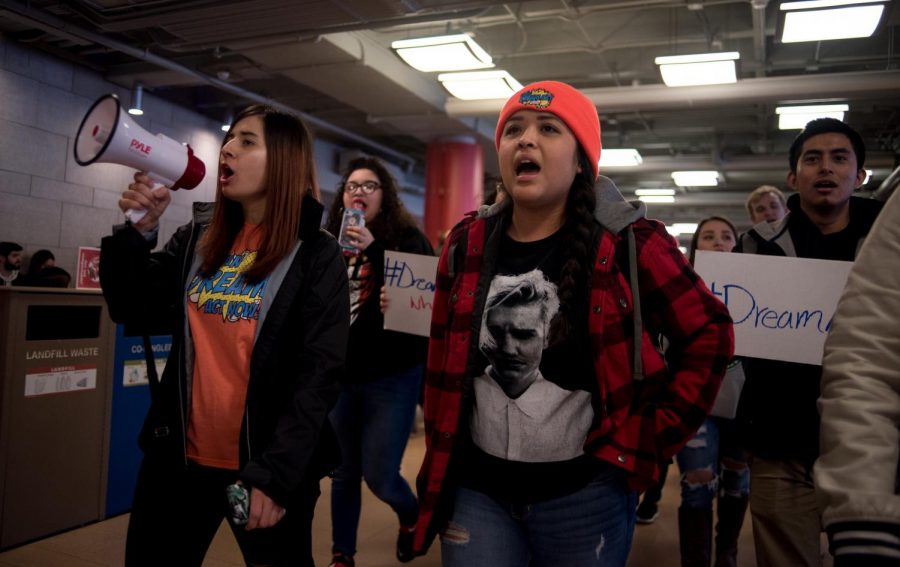 ASWSU Sen. Itzel Trejo, right, helps lead a march through the CUB on Thursday in support of the DREAM Act.

Sen. Itzel Trejo, who represents Arts and Sciences, Veterinary Medicine and Pharmacy, ran for ASWSU Senate in early 2017, looking to make a difference.

“I knew that if I wanted to make things happen, I would have to run for a position like this,” the junior political science and Spanish major said.

Since taking her position, Trejo has focused on building a voice for undocumented students and increasing the Senate’s visibility. She has co-authored multiple pieces of legislation supporting protections for undocumented students, run the ASWSU Comes to You outreach campaign and is planning this year’s joint meeting with the Pullman City Council.

From DACA to DREAM Act

Trejo co-authored a resolution in the fall semester supporting recipients of the Deferred Action for Childhood Arrivals program, which protects undocumented immigrants brought to the U.S. at a young age from deportation.

“It is something that I know affects a lot of students on campus who may not want to come out and speak,” she said.

President Donald Trump has set March 5 as an expiration date for the Obama-era policy unless Congress acts to save it.

This semester, Trejo worked on another resolution in support of the DREAM Act, a legislative proposal that would establish a path to citizenship for undocumented people. The shift from DACA to the DREAM Act is important, she said.

“DACA ended,” Trejo said, “what undocumented students want is a permanent solution, which is the DREAM Act.”

Trejo said the first thing that jumped to her mind when she thought of campus climate was the Trump Wall demonstration in October 2016, when WSU’s College Republicans showed their support for then-candidate Trump and his anti-immigration campaign promises by erecting a plywood wall painted to look like bricks.

“As far as campus climate, it has been an interesting year,” she said. “A lot of things have happened, both good and bad.”

As a member and former co-chair of the Crimson Group, which serves undocumented students at WSU, Trejo has been one of the university’s leading activists.

She has sent her resolutions to Washington’s entire Congressional delegation as well as WSU President Kirk Schulz and helped organize two pro-DREAM Act demonstrations on campus.

Trejo said she felt encouraged to get more involved following a trip to Washington, D.C. in November, where hundreds of students from across the country gathered, urging Congress to pass legislation that would protect undocumented people from deportation and create a pathway to citizenship.

“It really inspired me,” she said. “I came back with motivation and a passion to make things happen.”