Hitting toward a major league dream 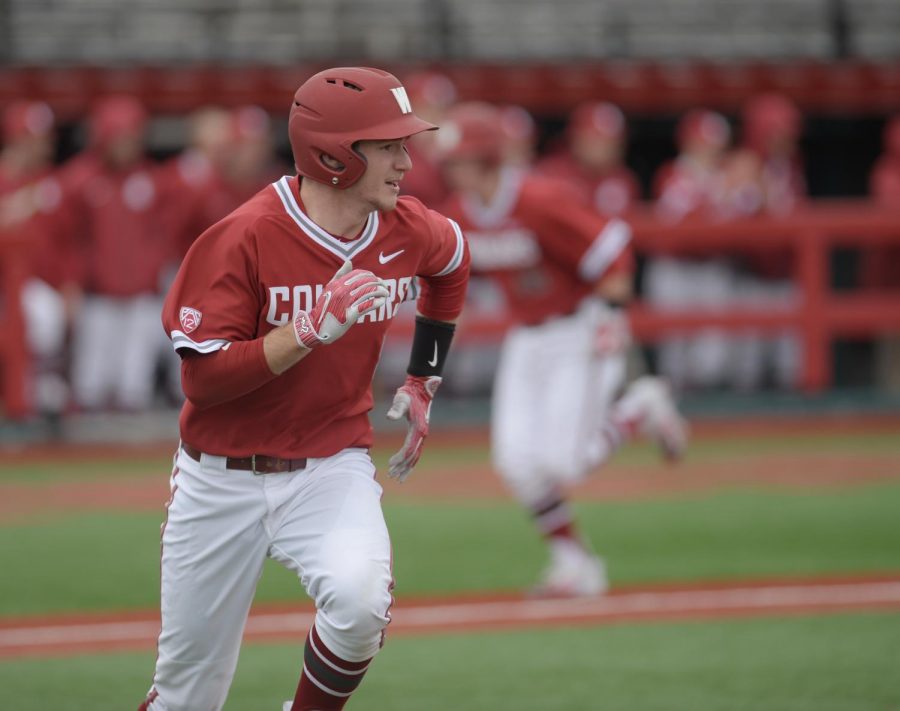 Then sophomore Justin Harrer runs the bases after getting a hit against Utah Valley on March 11, 2017 at Bailey-Brayton Field.

The allure of professional baseball can be hard to pass up for those drafted out of high school. Relative fame, a signing bonus and the title of “Professional Ballplayer” incentivize numerous prep stars every year to forgo college and make the jump to the MLB.

But for those who do go to college, their patience can be rewarded in a big way.

The San Diego Padres drafted Justin Harrer in the 18th round of the 2015 MLB First-Year Player Draft after he graduated high school. He turned down the offer in order to continue developing his skills on the field. Now entering his junior season at WSU, Harrer is again eligible to be drafted, something he said he does not dwell on.

“I definitely have a goal to play professional baseball,” Harrer said. “At the end of the day, it all depends on how I play.”

Harrer verbally committed to Oregon State University in 2014 but decided to go to WSU after receiving a scholarship offer and making an official visit. Scouts told him the coaching staff, led by Head Coach Marty Lees, would help his development.

During the offseason of his sophomore year, Harrer moved from his natural position as shortstop to left field to make room for a talented recruiting class. He took to his new role and made big strides at the plate as well. He improved his batting average to .298 and became one of the best power hitters in the Pac-12. His 17 doubles ranked fifth in the conference and his .509 slugging percentage ranked 10th.

Harrer attributed his progress at the plate in 2017 to the coaching staff, specifically Assistant Coach Jim Horner who helped him with his swing.

The hard work has not stopped for Harrer as he prepares for the 2018 season and the draft. The Oregon native will once again switch positions and start at second base for the Cougars.

The decision to move was made after third baseman Shane Matheny left for professional baseball, shifting sophomore Dillon Plew from second base to third base and Harrer from left field to second.

Lees said Harrer embraced the change and has impressed throughout the offseason.

“We do plan on playing him at left and second,” Lees said. “That’s the luxury we have with Justin because he’s such a fine athlete.”

Harrer said he is looking forward to being back in the infield, where the game is faster paced and more engaging, and wants to continue making strides at the plate. This offseason, he has focused on shortening his swing and getting deeper into counts, as well as switching his approach when hitting with two strikes.

Lees said he projects Harrer to be the Cougars’ No. 5 hitter in the early part of the season. His ability to play multiple positions gives the team more flexibility with their lineup, Lees said.

Harrer said he expects a lot from his team this year and thinks they will be near the top of the conference standings all season.

With scouts in the stands, Harrer said he hopes to impact the future of the program and his career in 2018.

“I’m just going to try to go out and play the best baseball that I can play,” he said, “and the rest will take care of itself.”