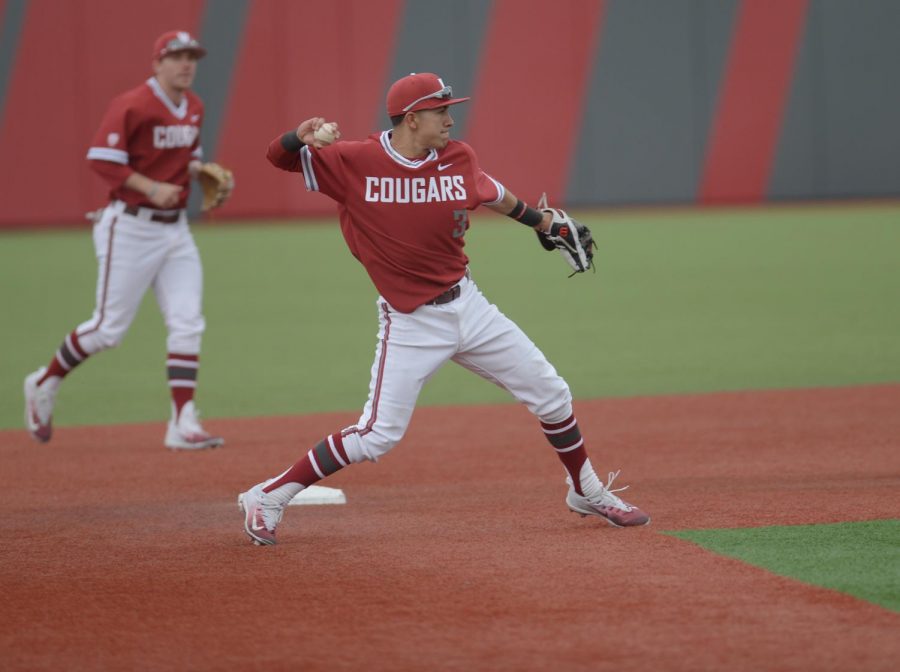 Then sophomore Andres Alvarez throws out a runner in a Utah Valley game on March 11, 2017 at Bailey-Brayton Field.

Head Coach Marty Lees returns for his third season at the helm, coming off a 24-29 campaign in 2017. Lees said he’s excited about the future of Cougar baseball.

The Cougars return with the majority of last season’s team, having lost only a few players over the offseason.

One key player who is not returning is junior third baseman Shane Matheny. He led the team in on-base percentage and was a standout defensively before being drafted in the 23rd round of the MLB draft by the San Francisco Giants. Lees said he thinks Matheny was the best third baseman in the conference last season.

Sophomore Dillon Plew will move from second base to third, and junior Justin Harrer will split time between left field and second base to compensate for the loss of Matheny. Lees said he is excited about the depth of his team offensively.

The early season starting rotation will be comprised of three lefties. Senior Scotty Sunitsch will move from the bullpen to the Friday night starting pitcher spot. Senior Cody Anderson and redshirt sophomore Isaac Mullins will both get opportunities in the rotation as well. Senior Ryan Walker will return to the bullpen as the closer to start the season.

Lees said he enjoys the flexibility of having three lefthanders in the starting rotation, but ultimately their success is dependent on limiting mistakes. WSU finished ninth in the conference with a 5.50 earned run average in 2017.

“We’ve got to throw more strikes,” Lees said. “We haven’t done that the last couple years.”

Lees said he wants to mix things up in the early part of the season to find the right lineup combination. WSU will play eight games in 10 days to begin the non-conference portion of its schedule.

The Cougars will play UC Riverside at 11 a.m. Friday and 3 p.m. Sunday and Nebraska at 11 a.m. Saturday and Sunday.