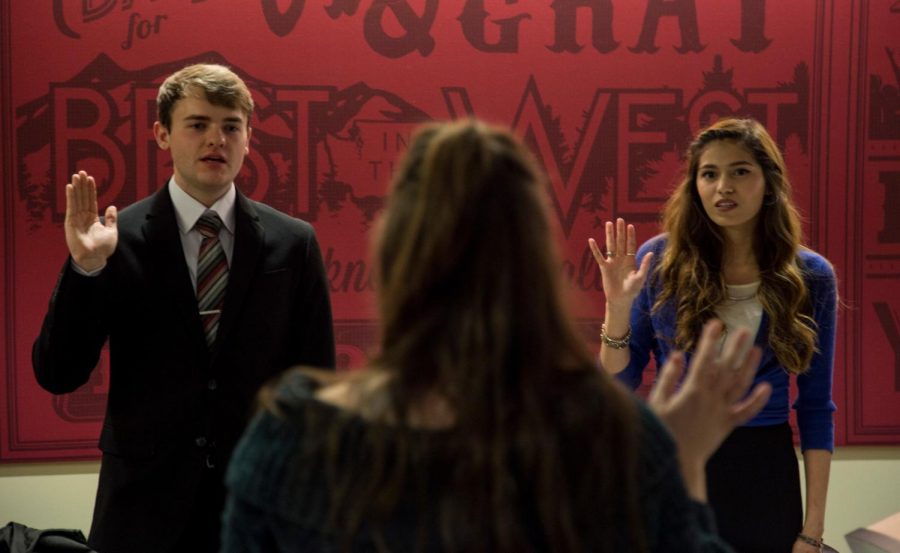 The resolution mentions Jackson’s accomplishments at WSU, including serving as president of his WSU freshman class, working as a Daily Evergreen reporter and receiving the Edward R. Murrow Award for being the top senior in the class of 1954.

“His name will forever be associated with the college and with our university,” Hyllseth said, “and we should be proud of that.”

All Campus Sen. James Dalton said it was inappropriate that the resolution mentioned the more than $1 million that Jackson donated to the Murrow College and WSU, because it pulls attention away from his life.

“I don’t see why we should put donations into it,” he said.

Freshman Delegate Blake Gurney said the resolution’s intention was to honor and celebrate Jackson’s life, and part of what made him great was his large donations to the university.

All Campus Sen. Savannah Rogers said the resolution was sentimental.

“This resolution is different from other resolutions we do,” she said. “It’s full of emotion.”

Three freshmen, Cristalina Ramirez, Christian Cisneros and Rhys Chapman, presented their resumes to the Senate and briefly answered questions about their goals.

Ramirez, a sociology major, said she is a first-generation student from a migrant farm worker background. She said she would create more events that connect students and professors.

Ramirez said one of the biggest issues freshmen face is lack of representation and voice.

Cisneros, a history education major, said he would speak up for people of color who feel underrepresented at WSU, being of Afro-Mexican heritage himself. He said freshmen often struggle to balance academics and recreational activities, and that he would solve this by reaching out and talking to people.

“For the freshmen class, I believe our biggest issue is involvement,” Cisneros said.

Chapman, a political science major, said he has experience in student government from high school. He agreed involvement is a major issue for freshmen, and said he would reach out to students living in dorms.

“I love this school and I want to serve it,” Chapman said.

College of Arts and Sciences Sen. Devon Holze said incoming freshmen delegates are pressed for time, as they have just a few weeks to carry out their plans.

“Having concrete goals in mind is really important,” she said.

Gurney said he wants to work with delegates who have grit and are willing to do hard things, especially since the first month on the Senate is usually difficult.

“You just kind of got to stick your nose in and grind away for a while,” he said.

Senators gave nine votes to Ramirez, seven to Cisneros and one to Chapman, securing the first seat for Ramirez. They voted again for the second seat, giving nine to Chapman and eight to Cisneros.

Chapman and Ramirez were both sworn in and took their seats at the Senate table.