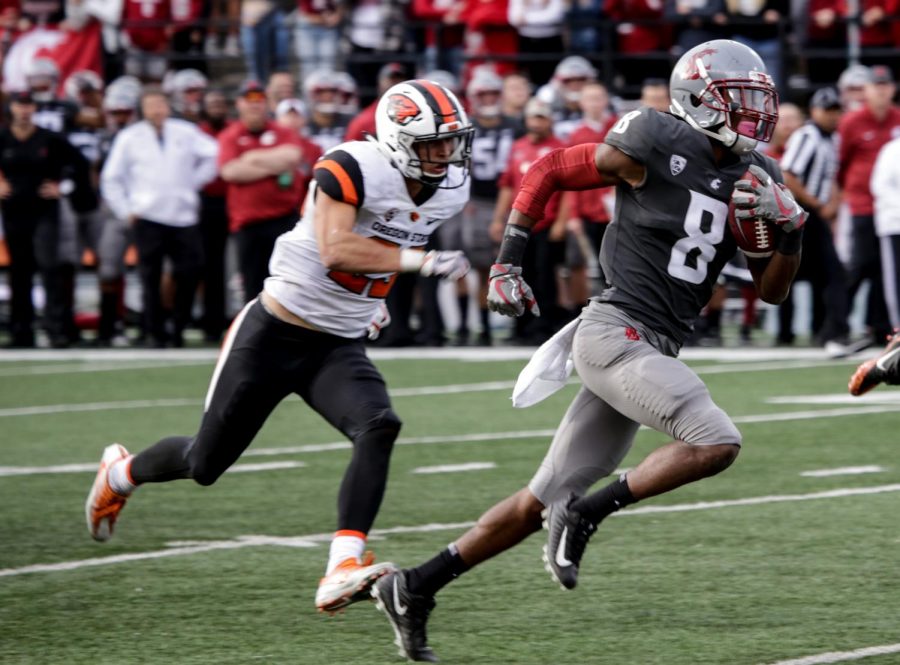 With the 2018 NFL Scouting Combine set for next week in Indianapolis, Indiana, four WSU players will have the chance to show scouts and teams they are worthy of playing at the next level.

Those four players include quarterback Luke Falk, offensive lineman Cole Madison, defensive tackle Hercules Mata’afa and wide receiver Tavares Martin Jr., who was dismissed from the team in December for a violation of team rules.

Surprising to some, two-time All-American offensive lineman Cody O’Connell did not make the list, even though he played in the East-West Shrine Game. A video surfaced of O’Connell struggling during the training portion of the week, which may have caused NFL scouts to question his speed and mobility at the next level.

A Cougar lineman who might have what it takes to make it to the NFL is tackle Madison, who is projected as a fifth- or sixth-round pick, per NFL.com. At the Senior Bowl, Madison experimented with playing inside at guard and center. It will be interesting to see where he ends up playing most of his snaps, but his frame and ability make him almost a guaranteed draft pick.

One of the more interesting invitees was Martin Jr. His agility and ball skills are what teams will consider his assets. Improving his speed and consistency with his hands could make him a nice fit as a slot receiver. It remains to be seen if he gets drafted at all, but it’s likely a team will sign him. If he ends up with a consistent quarterback, Martin Jr. could be a formidable name in the NFL.

The most dominant player on the WSU team this year, Mata’afa, decided to forgo his senior season in Pullman due to his surging draft stock after collecting consensus All-American honors. The combine roster has listed the standout defensive tackle as an outside linebacker, the position he might have to switch to at the next level.

Victor Cotto, a 24/7 Raiders insider, talked to a scout with the Oakland Raiders who was adamant that Mata’afa should have returned for his senior season.

“This is the sort of [player] that should stay in school instead of putting us scouts in tough spots to project where he plays,” the scout said.

The scout might have a point, but I don’t blame Mata’afa for not coming back, as his draft stock was rising rapidly. Yes, it may be hard to classify him, but who’s to say that one more year would have have made it more apparent?

Why do you even need to pinpoint one position he could play? Just take the talent for what it is and decide the best position for him once you see him with your own eyes. He may even be able to play multiple positions based on his versatility.

Falk, who left a lasting legacy at WSU, will also be trying to catch the attention of pro scouts. If put on an NFL team with immense talent all over the field, Falk might just thrive. In today’s NFL, quarterbacks are trending as dual threats with their legs and arms, but that is not the case with Falk. He is going to have to do it the old-fashioned way from the pocket and get the ball out of his hands quickly.

My best comparison for Falk is the great New England Patriots quarterback Tom Brady. Now before you go crazy, think about Brady when he entered the NFL after playing for University of Michigan. He was non-athletic and slow, and teams wondered if he had the talent to be an NFL quarterback. He was given an opportunity and had enough ambition and grit to seize the moment and never look back.

Sometimes it takes being on the right team for things to fall into place. Brady only has a few years left, so let’s see if New England takes a chance in the middle of the draft on a WSU quarterback — they’ve done it before with Drew Bledsoe. Falk seems like he would excel in the Patriots’ system.

The success these players will accumulate at the next level is unknown, but all four have the potential to make an impact in the NFL if they can prove themselves in the combine.