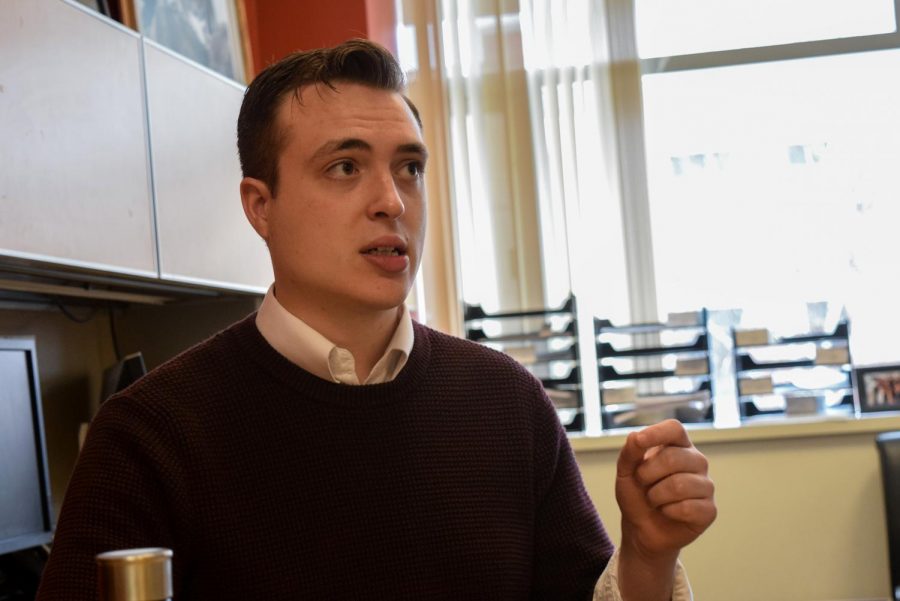 ASWSU Senator Gavin Pielow talks about his fight against mandatory student fees and civic involvement on campus Friday at the ASWSU senate office.

All Campus Sen. Gavin Pielow ran for ASWSU Senate in the spring of 2017, hoping to find a way to get more people involved in student government and local politics.

Pielow has since crafted legislation intended to avoid conflicts of interest in the student government, criticized mandatory fee proposals and plans to work with residence halls to increase voter turnout in the student body.

Pielow said the bill he was most proud to author was one requiring senators to list their affiliated student organizations and abstain from voting when those organizations’ interests tangle with the Senate’s.

He said he proposed the bill amidst worries that some senators had conflicting interests between their positions on the Senate and their involvement in student organizations.

“This list requires senators to check themselves,” Pielow said.

For example, he said, a senator who was also president of a Registered Student Organization would have to disclose their relationship with the RSO and abstain from voting if the club were to request funds or support from ASWSU.

“This bill has tangibly tackled that issue,” Pielow said.

Senators brought forth a bill Feb. 14 with the athletics department’s support that would require all students to pay a $265 athletics fee, which would include a sports pass. All Campus Sen. James Dalton, who authored the bill, and ASWSU President Jordan Frost, who said he brought the idea to the senators, both argued the Senate should allow the student body to vote on the proposal. While Frost and Dalton have said it was important for students to have a choice on the matter, Pielow saw it differently, according to a previous Evergreen article.

“Students already have a choice,” he said. “It’s an optional sports pass.”

Pielow said he would propose a resolution in the coming weeks to encourage residence halls to hold voter registration forums. Students can register to vote during orientation, he said, but only if they already know their future addresses, which many do not find out until later in the summer.

He said students choosing not to vote deprives future generations of representation specific to their interests in local governments.

“We have a huge impact here in Pullman,” Pielow said.

Pielow endorsed Harald Hyllseth and Devon Holze for ASWSU president and vice president. He said they have the necessary experience for the positions, and his motivation for endorsing them came from what he has seen them do to represent students.